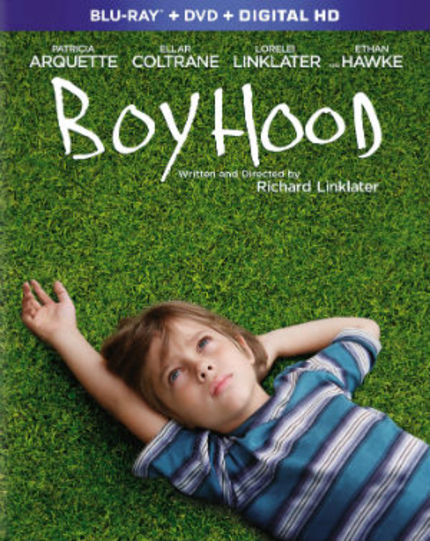 Landing the top spot in ScreenAnarchy's Top 10 Movies of 2014 poll among our writers, Richard Linklater's Boyhood tells a concise story over a period of 12 years: a boy grows up. And now you can win one of two copies of the Blu-ray combo pack that we have available to give away, thanks to Paramount Home Media Distribution!

Ellar Coltrane stars as the boy, with Patricia Arquette and Ethan Hawke as his parents, and Lorelai Linklater as his sister. As Jim Tudor wrote in the Top 10 Movies post:

"Humbly precise, Richard Linklater's Boyhood might just be his masterpiece. It evidences an unprecedented go-for-the-gusto 12-year shoot, the unwavering commitment of all involved (special notice to Patricia Arquette, who secretly owns this movie), and an expertly sustained tone and vibe in the course of that most risky production schedule. The film is full of deeply moving small moments."

This giveaway is for U.S. residents only. It is now concluded and winners have been notified. Thanks to all who entered!
If you qualify, please send us an email with your name and mailing address and confirm that you are a U.S. resident and that you want to watch what may be the best movie of 2014. We'll select two people at random from entries received by 11:59 p.m. E.S.T. on Friday, January 9, 2015.
For more incentive, here are the details on what is being offered, straight from the official description:
The Boyhood Blu-ray Combo Pack includes a look at the extraordinary work that went into making the film, as well as an in-depth Q&A with Richard Linklater and the cast.
The Blu-ray Combo Pack available for purchase includes a Digital Version of the film that can be accessed through UltraVioletTM, a way to collect, access and enjoy movies. With UltraViolet, consumers can add movies to their digital collection in the cloud, and then stream or download them--reliably and securely--to a variety of devices.
Boyhood Blu-ray
The Boyhood Blu-ray is presented in 1080p high definition with English 5.1 DTS-HD
Master Audio, Spanish 5.1 Dolby Digital and English Audio Description with English, English SDH and Spanish subtitles. The combo pack includes access to a Digital HD copy of the film as well as the following:
Blu-ray
• Feature film in high definition
• The 12 Year Project
• Q&A with Richard Linklater and the Cast
DVD
• Feature film in standard definition
Boyhood DVD
The Boyhood DVD is presented in widescreen enhanced for 16:9 televisions with
English 5.1 Dolby Digital, Spanish 5.1 Dolby Digital and English Audio Description and
English and Spanish subtitles. The DVD includes the feature film in standard definition.
Tweet Post Submit

Do you feel this content is inappropriate or infringes upon your rights? Click here to report it, or see our DMCA policy.
Ellar ColtraneEthan HawkePatricia ArquetteRichard Linklater