ENTER THE DANGEROUS MIND Trailer: How To Deal With Horrors No One Else Has Seen 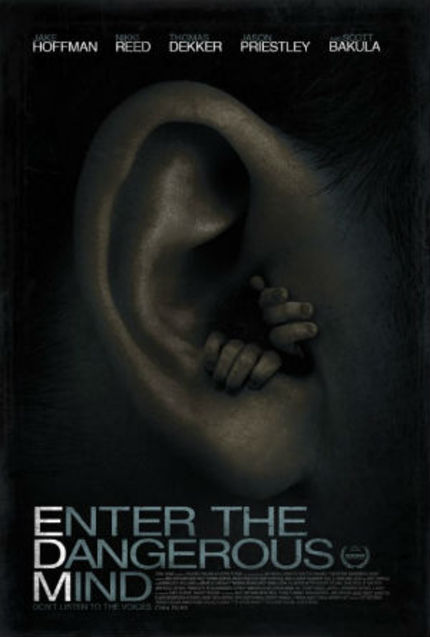 Psychological-horror thriller Enter the Dangerous Mind is heading to iTunes and select U.S. theaters on Friday, February 6, and a new trailer provides good reason to check it out.

Jake Hoffman stars as Jim, "a quiet, unassuming, hesitant, and incredibly shy young man," as I wrote in my SXSW review, when the film was titled Snap.

"He escapes into music, whaling blasts of noise and harsh beats that he shapes into accompaniment for daily news footage, and posts the results on social networks, where he has built a respectable following.

"His constant companion Jake (Thomas Dekker), however, badgers Jim to do more, and when Jim meets the lovely Wendy (Nikki Reed) in the course of his duties as a computer repairman, Jake pushes Jim to ask ask her out on a date. Jim cannot pull the trigger, as it were, but Wendy is attracted to him and asks him out. Their date goes well, but when their natural attraction heats up physically, Jim flashes back to awful memories, and their would-be intimate relations end on an awkward -- and messy -- note.

"The sexual encounter snaps something in Jim's mind, lighting the fuse on a ticking, all too human time bomb that no one really knows how to stop from exploding."

I concluded that the film "exerts a gravitational pull into a well of despair that is overwhelming and/or repellent. Afterward, my stomach remained clenched up. Your emotional mileage may vary."

You can watch the trailer below, though I'd recommend putting on headphones and turning up the volume to get the full effect.

(Full disclosure: Ryland Aldrich, who is ScreenAnarchy's Festivals Editor, served as one of the producers of the film. He was not involved in the writing or editing of this article.)

More about Enter the Dangerous Mind