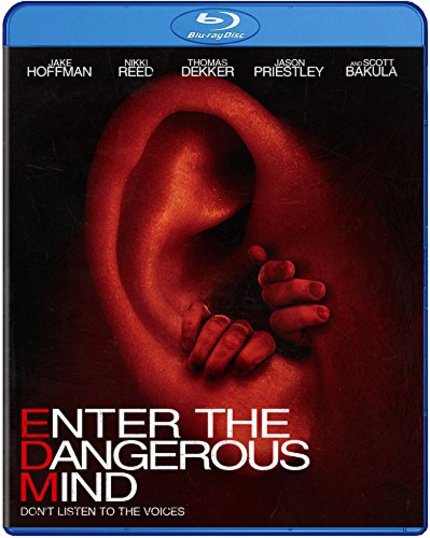 Time for another giveaway!

This time around we've got another new release from Texas based Well Go USA. The film is Enter the Dangerous Mind, a psychological thriller based in the world of underground EDM DJs. The film stars Jake Hoffman (son of Dustin) as a DJ with a growing fanbase online whose world and psyche start to unwind as he gets pushed into pursuing a girl, played by Nikki Reed. The film premiered at SXSW under its original title, Snap, in 2013 and has ScreenAnarchy's festivals editor Ryland Aldrich on board as a producer. I saw the film at that festival and quite enjoyed it, but it was managing editor Peter Martin who had the privilege of reviewing the film for us at the time. Here is his summation of the film:

...In an age of mass murder carried out by individuals suffering from mental illness, this is what the discussion should be; not just about the means of destruction -- as important as that argument is, especially in the U.S. -- but about the root causes of violence and how to help people, without causing harm to themselves or others. And that requires an acknowledgement that there is a problem that can't be shuffled off-stage because it's too uncomfortable or unpleasant to discuss.

[Enter the Dangerous Mind] exerts a gravitational pull into a well of despair that is overwhelming and/or repellent. Afterward, my stomach remained clenched up.

Certainly a film worth checking out.

Want a copy? I'm going to make it easy this time. Just send an e-mail to josh [at] ScreenAnarchy [dot] net and tell me you want it, I'll pick a couple of random winners next Tuesday, April 21st. Good luck!