It's always the quiet ones.

In Enter the Dangerous Mind, Jim (Jake Hoffman) is a quiet, unassuming, hesitant, and incredibly shy young man. He escapes into music, whaling blasts of noise and harsh beats that he shapes into accompaniment for daily news footage, and posts the results on social networks, where he has built a respectable following.

His constant companion Jake (Thomas Dekker), however, badgers Jim to do more, and when Jim meets the lovely Wendy (Nikki Reed) in the course of his duties as a computer repairman, Jake pushes Jim to ask ask her out on a date. Jim cannot pull the trigger, as it were, but Wendy is attracted to him and asks him out. Their date goes well, but when their natural attraction heats up physically, Jim flashes back to awful memories, and their would-be intimate relations end on an awkward -- and messy -- note.

The sexual encounter snaps something in Jim's mind, lighting the fuse on a ticking, all too human time bomb that no one really knows how to stop from exploding.

As Wendy learns from Kevin (Scott Bakula), her boss at a women's shelter, Jim suffers from schizophrenia, owing to a horrific, prolonged trauma he experienced as a boy, and Jake is his half-brother, who shared the experience but disappeared afterward. Jim is such a likable character that Kevin and Wendy want to help him, but question whether he's beyond help, if the only solution is to confine and treat him in an institution. Meanwhile, Jim continues to tick away, a menace to himself and others, urged onward by his non-existent half-brother. 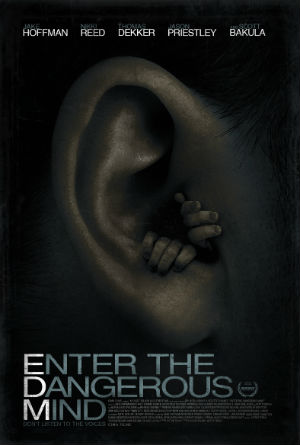 Directors Youssef Delara and Victor Teran define the psychological horror largely through an aggressive sound design reflecting Jim's deteriorating state of mind, coupled with imagery that continually goes askew. It sets the nerves on edge, creating an uneasy, unsettling atmosphere of dread. The actors are up to the task of carving out characters that stand apart from the background noise.

Enter the Dangerous Mind leaves itself open to charges that its depiction of mental illness is not representative of the vast majority of people who suffer from emotional and mental afflictions, and it certainly is a disturbing portrait of one man and the demons who plague him. Victor Teran's screenplay occasionally dips into the well of thriller/horror cliches, certain scenes are too 'on the nose' to be plausible, and others trade on the stereotype of how 'crazy people' behave.

Yet, in an age of mass murder carried out by individuals suffering from mental illness, this is what the discussion should be; not just about the means of destruction -- as important as that argument is, especially in the U.S. -- but about the root causes of violence and how to help people, without causing harm to themselves or others. And that requires an acknowledgement that there is a problem that can't be shuffled off-stage because it's too uncomfortable or unpleasant to discuss.

Enter the Dangerous Mind exerts a gravitational pull into a well of despair that is overwhelming and/or repellent. Afterward, my stomach remained clenched up. Your emotional mileage may vary.

(Full disclosure: Ryland Aldrich, who is ScreenAnarchy's Festivals Editor, served as one of the producers of the film. He was not involved in the editing of this review. For what it's worth, I forgot about our friendship while I was watching the movie.)

Review originally published during SXSW in March 2013, when the film was titled Snap. It will open in select theaters and via various Video On Demand platforms on Friday, February 6.

More about Enter the Dangerous Mind