Review: THE TAKING OF TIGER MOUNTAIN, A Wartime Epic With A Sense Of Adventure 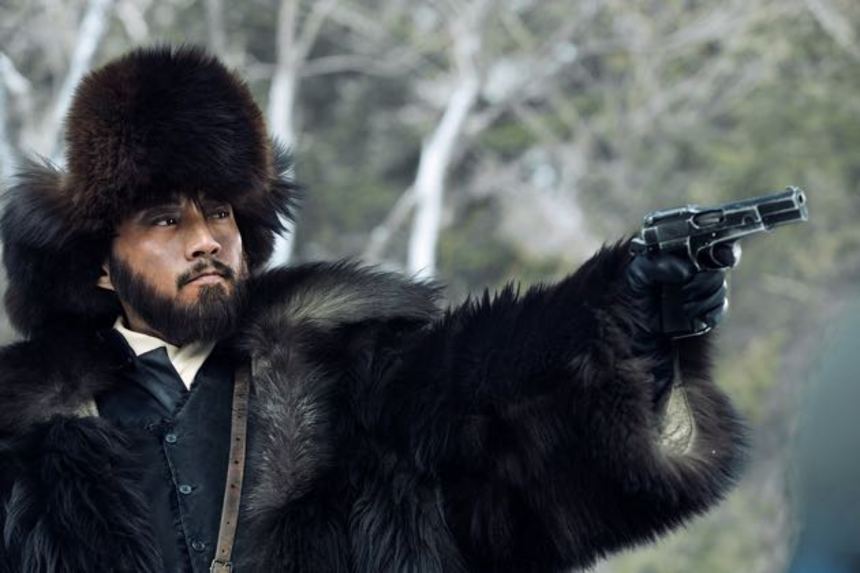 Tsui Hark scores a resounding success with his spirited adaptation of classic adventure novel Tracks in the Snowy Forest. Again exploring the visual possibilities of 3D, while eschewing the typically austere tone of most wartime epics, The Taking of Tiger Mountain proves consistently entertaining.
First published in 1957, Qu Bo's novel Tracks in the Snowy Mountain dramatises the true story of Yang Zirong and the brave exploits of Unit 203 of the People's Liberation Army in the tumultuous period following the end of World War II. After the Japanese withdrawal, China descended into Civil War that had been percolating for many years. Gangs of bandits and marauders ravaged the countryside, while the Kuomintang and the PLA jostled for political and military control of a vast, fractured nation.
Set deep in the wintry north-east of the country, Qu's novel tells the heroic story of an isolated PLA unit who took on a vastly superior gang of bandits, by sending one of their number undercover to infiltrate the enemy's forces from within. The Taking of Tiger Mountain recounts the exploits of Agent Yang (played here by Zhang Hanyu) in exuberant fashion, pitting Unit 203 against the fiendishly malevolent Lord Hawk (an unrecognisable Leung Ka Fai) in a tale of courage and high adventure.
Going against the grain of many recent Chinese wartime epics, Tsui injects his film with energy, personality and a genuine sense of fun, while never belittling the plight of the desperately under-equipped PLA forces. Recapturing a similar fantastical tone to another of his recent successes, 2011's Flying Swords of Dragon Gate, Tsui rejects overt patriotism and stale austerity in favour of crowd-pleasing bravado and kinetic thrills, giving his film an almost Where Eagles Dare edge of excitement.
Yang cuts a classically heroic figure, flawed from too many years undercover alongside amoral barbarians, yet driven by an unflappable duty to uphold righteousness at any cost. The rest of Unit 203 are less clearly defined, made up of familiar stock characters, all of whom fight for what's just and ultimately do the right thing. Perhaps most interesting among their number is field nurse Little Dove (Tong Liya), who resents being singled out as the only female and can more than hold her own when needed.
Along the way, the unit adopts a typically plucky youngster, Knotti, into their ranks, who at first proves more trouble than he's worth but eventually pulls his weight by leading the soldiers safely through enemy territory. His mother, Qinglian (Yu Nan) was kidnapped by Hawk and now lives as his wife. Far from helpless, however, her survival instincts see her allying herself with whomever will guarantee her safe passage off Tiger Mountain - a strategy that earns its own bodycount, while also giving the unit someone to rescue.
What becomes obvious very early on is that Tsui is far more interested in Hawk and his gang than in his straight-laced heroes. Leung Ka Fai is deliriously evil as Lord Hawk, complete with hunchback, hook nose, and buzzard hairdo. His mountain lair is part military fortress, part sorcerer's castle, while his menagerie of minions provides us with a parade of tattooed, vulgar, good-for-nothing hoodlums. Among their number is Shi Yanneng (The Wrath Of Vajra), and while it's great to see him expanding his range, it is an undeniable shame he doesn't get to showcase his fighting prowess here.
Tsui Hark built his reputation on pushing the boundaries of action and fantasy cinema, and to this day demands more from the medium than it is perhaps capable of giving him. A number of the action sequences in The Taking of Tiger Mountain simply defy realism and veer so far into the realm of the impossible that Tsui repeatedly falls back on CGI to achieve the desired effect. Oftentimes this works just fine, but on occasion the technical limitations show through and scenes like a tree-bound skirmish between Yang and a giant tiger, end up being too cartoonish to impress.
However, Tsui can never be accused of playing it safe, and he continues to experiment with the depth of his frame in order to get the fullest effect from the 3D presentation. Shooting in the snow adds just one more element to his colourful palette, and when combined with fire, debris, foliage and numerous exploding projectiles, the result is a kaleidoscope of motion and mayhem that stimulates the senses.
The film's only significant misstep is the decision to tether the narrative to the present day, as if Tsui was concerned that modern audiences needed convincing this was a story worth paying attention to. Han Geng plays a young lad in present-day New York, who catches site of a Tiger Mountain-related video at a karaoke bar, before heading back to China to celebrate New Year. This sees him reflect on the events of 1946, transporting us back in time to the main story. It's a jarring and somewhat baffling way to open the film, and culminates in an equally misguided epilogue - that even includes an alternate climactic action sequence - and frankly doesn't work at all.
For the most part, however, The Taking of Tiger Mountain is a breath of fresh air in a genre stale and stiff from too many stuffy, pompous party-approved history yawns. Tsui fills his film with shootouts, explosions, ski stunts, animal attacks and even an extended sequence in which our hero takes a crap. Brimming with energy, action and genuinely interesting events from Chinese history, Tsui Hark has delivered an unashamedly entertaining holiday romp.
Sign-In to Vote
Tweet 0 Submit

Was looking forward to seeing this, but it's a shame it's not getting a 3D release in its much-trumpeted early release in the US. I don't understand why distributors would acquire such a high-profile title, then eviscerate its appeal by remove one of its most marketable, and anticipated, factors. Oh, well.

Similarly unfortunate, in mainland china you can ONLY find it in 3-D. I understand this is a new theater infrastructure thing, but too bad for audiences that can't or don't enjoy 3-D for whatever reason (same goes for the second flying bullets movie and The Crossing)