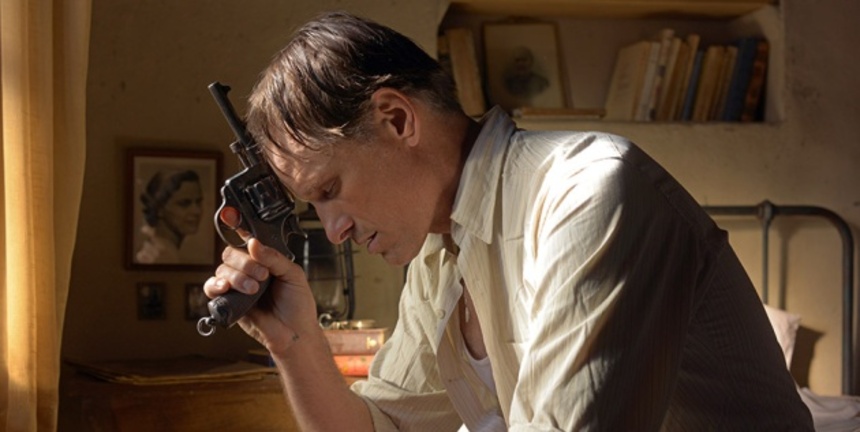 (How can you be Far From Men when Viggo is around?)

As a preview for the upcoming International Film Festival Rotterdam next month, loyal visitors were allowed to see one of the films already: David Oelhoffen's Algeria-based western Far From Men (Loin des Hommes), starring Viggo Mortensen. And a good time was had by all, as it is a pretty great film.

Far From Men takes place in Algeria during the late 1950s, when the North-African country was still ruled by France, but already knee-deep in a grim civil war for independence. Viggo Mortensen plays Daru, a teacher who lives high in the Atlas mountains, running a small French school for the local children. One day, a policeman delivers an unwanted guest: an arrested murderer who needs to be brought to a nearby city, for trial. The police has their hands full with the mountain rebels and cannot spare any policemen, so Daru is ordered to close the school for a couple of days, and deliver the criminal to the French court himself.

Daru is very reluctant to do so, but to his surprise the criminal is actually eager to get to the court, even though the French will undoubtedly sentence the man to death. And so the two set out for the city, on a trek by foot through freezing hills. They are hardly the only ones on the paths: groups of French soldiers, locals and rebels are around, and many of them contain both friends and enemies...

Based on the short story "The Guest" by Albert Camus, writer-director David Oelhoffen has added a road movie aspect by including the voyage, as Camus' tale played out entirely at Daru's school. It is a clever decision, as it allows Oelhoffen some maneuvering space with the story, while Daru's moral conundrums remain the same. The uprising against the French was very much in the news when "The Guest" was published, but nowadays many people will be uninformed, so the travels by Daru and his prisoner are used to show what state Algeria was in at the time. Also, characters are now defined by their actions rather than just their words, and the gorgeous but very harsh landscapes get to play an impressive double role as both plot device and blatant eye-candy.

Far From Men was called a western in the announcement (albeit one placed on another continent), and indeed the film shares many of that genre's best tropes: settlers versus indigenous people, minute figures traversing vast landscapes, the harsh living between pockets of civilization, tough men making tough decisions, old-fashioned gunplay, and the endless shades of gray after wars long-passed, and during civil wars long-present.

Needless to say the film would fall to pieces if not for some strong central performances, and those are thankfully damn solid. Daru is played by notorious polyglot Viggo Mortensen, who speaks only French and Arabic throughout the entire film. I'm not expert enough in either language to say if he has the wrong accent, but it all sounded very convincing. Unsurprisingly, he is great as the conflicted and sensitive teacher who turns out to be a bad-ass survivor as well (truth be told, Viggo can probably do such roles in his sleep by now). Meanwhile, his prisoner Mohamed is more than adequately played by French actor Reda Kateb, partly of Algerian descent, and a familiar face from A Prophet and Zero Dark Thirty.

All in all, Far From Men is quite a great film, but not exactly a mind-blowing one. Unique location aside, it will show you many things you have seen before, only now you get to see Viggo Mortensen and Reda Kateb do them. Thing is, they do it good, and the film is never dull or without cinematic beauty. The camerawork by Guillaume Deffontaines is gorgeous at times, especially during the treacherous hill-walking sequences, and the soundtrack by Nick Cave and frequent collaborator Warren Ellis is straightforward and effective. I left the cinema not elated perhaps, but definitely satisfied.