Meeting The Criterion: It's A Criterion Christmas And You Get RIOT IN CELL BLOCK 11 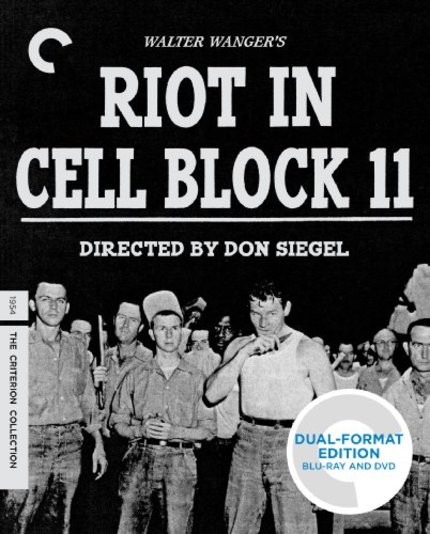 It's a Criterion Christmas! I'll be using Meeting the Criterion as a convenient way of reminding you of many of the Criterion Collections great releases from the last year. Whether your Criterion Collection is organized by spine number, title or director there's a good chance you'll see some releases that are bound to end up on your must remember to get list.
First up I'm looking at Riot in Cell Block 11. Made in 1954 this is a treasure trove for classic cinema lovers . You get performances by a large number of highly recognizable character actors. Neville Brand the heavy in countless westerns and film noires like D.O. A. (1950) and great classics like Birdman of Alcatraz (1962) and Stalag 17 (1953),  just shines here as the leader of the prison riot. It's a rare opportunity for him to take a lead dramatic role. William Schallert- one fo the most famous character actors of the 40's to the 60s plays a reporter, Whit Bissell star of great 50s genre fare like I Was a Teenage Frankenstein (1957), I Was A Teenage Werewolf (1957), Creature from the Black Lagoon (1954), plays a prison guard and even Paul Frees- one of the most famous voiceover artists ever has a role. In fact look extra hard and you spot Green Acres Hank Kimball (Alvy Moore).
Directed by Don Siegel the film was hugely instrumental in propelling its director Don Siegel foreword in his career. Of course Siegel is best known for films like the original Invasion of the Body Snatchers (1956), Dirty Harry (1971), and Escape from Alcatraz (1979). But he also took a young Clint Eastwood under his wing when the actor expressed interest in directing. Eastwood couldn't have had a better teacher. If you really want to see a great Siegel Film find a copy of The Beguiled (1971). Eastwood plays a Northern Civil War soldier who gets taken in by the inhabitants of a Southern all girls school and tries to escape by conning them each into bed. It's a gruesome atmospheric southern gothic. Great stuff.

Produced by the legendary Walter Wanger Riot in Cell Block 11 tackles a subject that was white hot at the time of its release Prison Riots bringing the problems prisons wardens guards and prisoners faced to life in a way that was pure Siegel. It would be easy to dismiss the movie as melodramatic if it weren't so scarily accurate in the way it shows everyone's desperation. Riot in Cell Block 11 made me a little sick as I thought about the current debate regarding the militarization of todays police force and the incredible rate of incarceration in the US. Siegel manages to humanize everyone here except perhaps the politicians and his choices in that regard seem almost prescient. Here are men, beleaguered, alone in need, and desperate to the point of violence and societys answer, the answer of public officials, is pathetic. This movie kickstarted an important discussion about changes that needed to be made in American prisons. Sadly the conditions it addresses are still far to common. Shot at Folsum State Prison the film used real inmates and guards as extras this is every bit a film that deserves the Criterion treatment and a place under the tree for any lover of 50's cinema, Don Siegel Films or prison melodramas. Special features on this Criterion Collection release include: new high-definition digital restoration, with uncompressed monaural soundtrack on the Blu-ray, new audio commentary by film scholar Matthew Bernstein and excerpts from the director's 1993 autobiography, A Siegel Film, read by his son Kristoffer Tabori. You also get a  booklet featuring an essay by critic Chris Fujiwara, a 1954 article by coproducer Walter Wanger, and a 1974 tribute to Siegel by filmmaker Sam Peckinpah