Meeting The Criterion: It's A Criterion Christmas And You Get ALL THAT HEAVEN ALLOWS 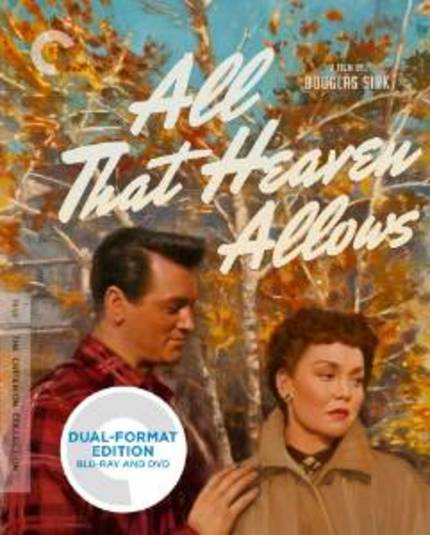 All That Heaven Allows (1955) was directed by Douglas Sirk. It's one of a handful of movies he did for Universal International Pictures between 1952 and 1959 and it appears dead center of that creative period that included other films like Magnificent Obsession (1954), The Tarnished Angels (1957) and Imitation of Life (1959).

Sirk's movies weren't taken too seriously when they came out. In fact a lot of them were dismissed outright. They play like simple melodramas, lots of emotion bubbling to the surface through simple character types and lots of stylized use of color and composition. Combined with sometimes flowery scores the overall sense is one of raw emotional power meets arch theatricality and going back and watching these films now it's hard not to see the way all those things work with and against each other.

All That Heaven Allows tells the then taboo story of a young man, played by Rock Hudson, in love with a much older woman, a wealthy widower, played by Jane Wyman. As their romance progresses they encounter the scorn of country club and kin and must make a difficult decision regarding whether their love for one another dictates parting or living in social exile.

When Sirk died his work was reappraised. A lot of critics have seen in his films a real satirical eye for American society and sexual mores, something effectively explored in the many extras on this disc. Rock Hudson's Home Movies is especially poignant. Hudson, who starred in nine of Sirk's movies got his big break through Sirk but he was also saddled with a Hollywood Hunk status that conflicted with his homosexuality.

This hour long film essay by Mark Rappaport explores the actor's career through that lens. It's a heartfelt piece but it does lack context offering too many unidentified clips from a huge range of Hudson's career. But it still gets its point across just fine showcasing the way the movie star machinery created personalities far less vibrant than those of the real life people it used as fodder for the fame machine.

You also get an audio commentary with film scholars Tammar Jeffers McDonald and John Mercer, a French TV interview with Sirk from 198, excerpts from Behind the Mirror: A Profile of Douglas Sirk, a 1979 BBC documentary featuring rare interview footage with the director and Contract Kid: William Reynolds on Douglas Sirk, a 2007 interview with the actor, who costarred in three Sirk films, including All That Heaven Allows. The booklet features an essay by film scholar Laura Mulvey and an excerpt from a 1971 essay on Sirk by filmmaker Rainer Werner Fassbinder

All That Heaven Allows Spine number 95 available in Dual Format Blu-ray/DVD with all extras on both.