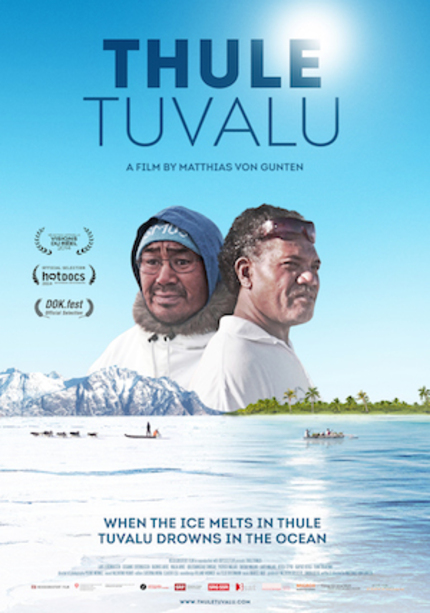 The documentary ThuleTuvalu is here to connect the Pacific Ocean island Tuvalu with the small town of Thule in northern Greenland. Never as visceral as the doc Leviathan, though still quite graphic, Matthias von Gunten's effort firstly exposes the world of hunting and fishing, as the people of both places highly depend on these activities.

Over the course of history, the inhabitants learned how to survive in such remote locations, passing the knowledge to their children. By interviewing its different protagonists, the first part of the film showcases the importance of family for a hunter or a seaman, and how the younger generations are learning the business. In Thule, people can do nothing of work besides hunting; and in Tuvalu, fishing is an essential activity.

While it's a clear demonstration of old traditions that never quite vanish, the present is a conflicted period of time and, in consequence, one of ThuleTuvalu's main themes is precisely the fear of change. After many years something is destined to forever alter the way of living in both places.

Following the steps of most documentaries that try to raise awareness, ThuleTuvalu makes us understand how people live in said places (exposing cultural aspects throughout), later reveal the problem that is changing/threatening their whole world (global warming), to finally indicate if there's a solution.

In Thule the ice is melting, changing the whole ecosystem. In direct relation to this, the sea level is rising in Tuvalu; hence sometime in the future the entire land is set to disappear. The important thing here is not the discovery that global warming is doing this per se, but really how the locals are reflecting and acting towards it.

Even if it's a little overlong and repetitive, the film has several interesting testimonies that feature, from both places, a sort-of resignation from the older people, since what worries them is certainly their children. There's also in Tuvalu a notable disbelief, as some people don't really think global warming is happening, while others compare the problem to biblical stories. The faith in God, and the belief that if good things came after the flood in Noah's story the same will happen now, contrast those people who have already gathered enough money to migrate to New Zealand seeking for a better life, away from seaman duties.

On the other hand, hunters in Thule know that their kids will have to find another ways to survive, far from using the help of dogs to hunt and then eat and sell the meat of seals or whales. The youngsters might have an option to be something else than a hunter, as their parents didn't, but still the uncertain future - as well as the problematic present - frightens everybody involved in this documentary.

ThuleTuvalu indicates the solution is still viable, and presents people with clear intentions of doing something to reach it, but mostly, it leaves a bleak feeling, as it might just be a document for future generations to see how life was once in Thule and Tuvalu.