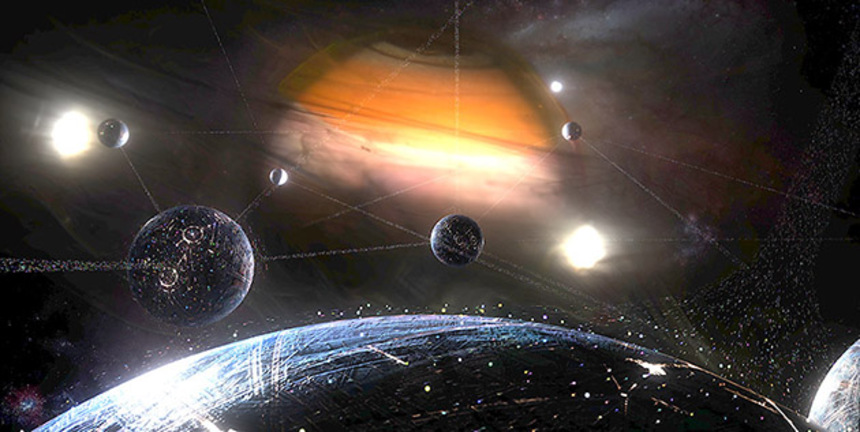 Earlier this month, as part of the Stanley Kubrick exhibit and retrospective at the TIFF Bell Lightbox, visual effects wizard Douglas Trumbull was in town to demo his proof-of-concept film for his next generation high-frame-rate presentation format, MAGI. Sort of a digital, 3-D, HFR replacement for Trumbull's venerated (but never adopted) Showscan 70mm 60FPS film process from the 1980s, Magi presents glisteningly real illusions of depth and clarity with no motion blur or 3-D jags.

Starting with a short documentary explaining why the process works better than standard formats (or even the 48FPS or 60FPS formats in which Peter Jackson and James Cameron are now working on The Hobbit trilogy and the Avatar sequels, respectively), Trumbull went on to screen UFOTOG, a ten-minute visual effects film made using the process.

The results were as advertised. I must admit I don't have a very clear idea of what UFOTOG was about as a film; I was entirely too caught up staring at its perplexing verisimilitude and liquid-clear presentation of a three-dimensional "reality" beyond (and occasionally before) the plane of the theatre screen.

Trumbull went on to run a quick slideshow on the process, which concluded with a number of concept designs for next-generation movie theatres that might make use of the technology. These included the rather unnerving idea of inflatable theatres that could treat movie exhibition more like a Cirque Du Soleil-style temporary attraction than a standing, permanent complex.

The presentation as a whole was compelling, though as usual I ran into my broad array of questions regarding the actual value of the tech against what we do today. My questions following the presentation are these:

1. Why are we never given the opportunity to view HFR content in 2-D? Yes, HFR makes the 3-D experience substantially better. But 3-D continues to be a confusing and faintly ridiculous attempt by filmmakers to, at best, continuously remind us that we are watching a movie by imprinting a false stereoscopic effect on top of a real one (i.e. the illusion of depth our mind automatically creates when looking at any photographed image, glasses or no).

There may be a technical requirement here that I'm not familiar with, but having seen UFOTOG with glasses on (and admittedly with a vast improvement in light levels), I would like to see the same film with the glasses off. I continue to salivate at the reports of people who have actually seen Showscan, which was 2-D.

2. Does the lack of an after-market strategy for HFR impact its likelihood to be widely adopted by the mainstream Hollywood film industry? This technology is being pushed by pioneers who want to drive audiences back into the movie theatres, so perhaps my question fundamentally misses the point.

But at the same time, I wonder if they're missing another point just as strongly: Hollywood makes a lot of money on home video. While HFR content can be down-converted to home video-friendly formats, the HFR experience itself basically becomes a dead end as soon as the theatrical run is concluded.

Whether "movie theatres are great!" showmen like Trumbull or Cameron like it or not, the majority of a movie's life cycle in the 21st century does not take place on a theatre screen.

3. Do the champions of HFR technology - Trumbull, Cameron, Jackson being the current kingpins - simply not see, or not understand, how potentially inappropriate the format seems to be for staging traditional drama?

Every evangelist for the technology presents it as the natural evolution of film format, usually by benchmarking their own frustrations with the "imperfections" of the process that we have now. But the more I hear these complaints, the more it sounds like personal grousing by filmmakers who think the name of the game is to present a filmed world that looks as close as possible to real life. I don't know where this idea comes from.

Much of the audience discussion at the Trumbull presentation revolved around Peter Jackson's Hobbit trilogy: a "bump in the road," Trumbull called it, while praising Jackson's courage for attempting the format in the first place. Trumbull nevertheless acknowledged that the "soap opera" effect reported by viewers of The Hobbit in HFR soured the experience for audiences and therefore for studios. (It was substantially harder to see The Desolation of Smaug in HFR than it was to see An Unexpected Journey, as Warner Brothers backed away from the format as quickly as possible. Choose your Battle of the Five Armies tickets accordingly.)

But the Trumbull conversation eventually landed on what is, perhaps, the more salient point: it was the content, not the form, of The Hobbit that made it a uniquely bad introduction piece for HFR photography.

The first Avatar, for example, demonstrates the inverse: it was a uniquely suitable subject upon which to platform the introduction of a new way of seeing movies (in that case, digital 3-D). The story itself was about immersion in, and experience of, an alien world. (The metaphor, with Jake's disabled human body and super-powerful avatar body, wasn't subtle. I'm surprised Cameron resisted the temptation to save the 3-D effect until Jake had been ported into the Na'vi body. "Put On Your 3-D Glasses Now!!")

But even Avatar managed to cling to the Goldilocks zone that exists somewhere between "real enough" and "too real," which allows our empathy mechanisms to flow seamlessly into a film we are watching. The Hobbit, arguably, did not; or at least, did not for most viewers on first viewing. (I've seen the first film in HFR a variety of times, and by the third outing, the effect looked completely normal to me.)

Equally arguably, perhaps, The Hobbit should not work for this kind of viewing experience, and perhaps, neither should any other narrative or fiction film. What, exactly, is the conceptual impact of creating a brazenly-clear fish tank effect on a screen the size of an apartment building? If the images there "look real," what does our mind think they look "as real as?"

UFOTOG features a UFO conspiracist speaking directly to the camera. His head, in "real" space, is the size of a hot air balloon. Surely, on some level, our brain must know - and reject - that illusion?

4. If HFR photography and presentation does indeed become successful, will it grease a pipeline that will carve "event" movies more towards experiential cinema and away from traditional narrative? This is question #3, inverted. Trumbull - with some coaxing - seemed to admit during his presentation that the majority of his interest lies in changing the form of filmmaking itself by this technology. UFOTOG is a second-person narrative (i.e. "You," the audience, are a character in the story, and the other characters are continuously addressing You), and the fourth wall is broken persistently throughout (i.e. the film screen is, indeed, a window through which you are peering - and the characters within are peering back).

But this is not what the vast majority of cinema is like, or ever has been. If there is appetite for HFR, and if HFR better serves stories like UFOTOG than, say, Gone Girl, will the high-end of the Hollywood machine begin to turn down the volume on traditional third-person storytelling and evolve into something else? In Avatar 2, will the Avatar be you?

Do you feel this content is inappropriate or infringes upon your rights? Click here to report it, or see our DMCA policy.
Douglas TrumbullHFRJames CameronPeter JacksonThe Hobbit