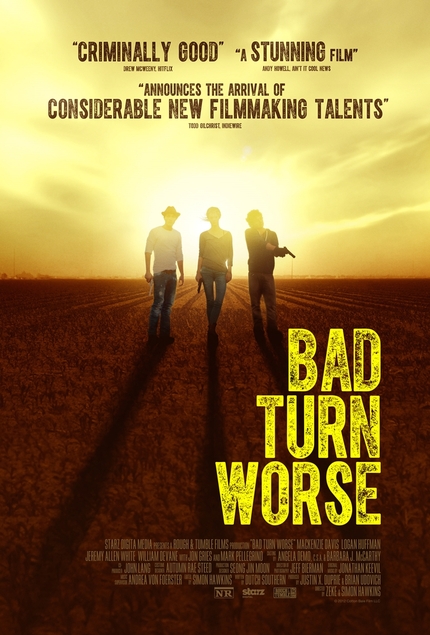 A selection of the 2013 edition of the Toronto International Film Festival - back when it was known as We Gotta Get Out Of This Place - Zeke and Simon Hawkins' indie thriller Bad Turn Worse hits limited theatrical release, VOD and iTunes on November 14th and there's a new trailer out there to entice you.

Here's how Toronto described it:

Tipping its hat from the start to the classic novels of pulp crime master Jim Thompson, We Gotta Get Out of This Place is a tight nouveau noir by first-time feature directors Simon and Zeke Hawkins. The Hawkins brothers have crafted a tense thriller in their story of three teens, on the verge of escaping a dead-end existence in their cotton-mill town, who get sucked into the seedy underbelly of organized crime, Texas style.

With his best pal Bobby (Jeremy Allen White) and his girl Sue (Mackenzie Davis) getting ready to leave town for college, good ol' boy B.J. (Logan Huffman) steals some money from his boss, Giff, so he can treat his friends to a wild weekend of partying. Unfortunately, the money belonged to a mysterious gangster known as Big Red, and the three teens are forced to rob a local money-laundering front to settle their debt. Insecurities and deception among B.J., Bobby and Sue ratchet up the tension leading to the heist, making it increasingly difficult to predict who will come out on top -- or even alive.

Do you feel this content is inappropriate or infringes upon your rights? Click here to report it, or see our DMCA policy.
bad turn worsesimon hawkinstrailerwe gotta get out of this placezeke hawkins

More about We Gotta Get Out Of This Place