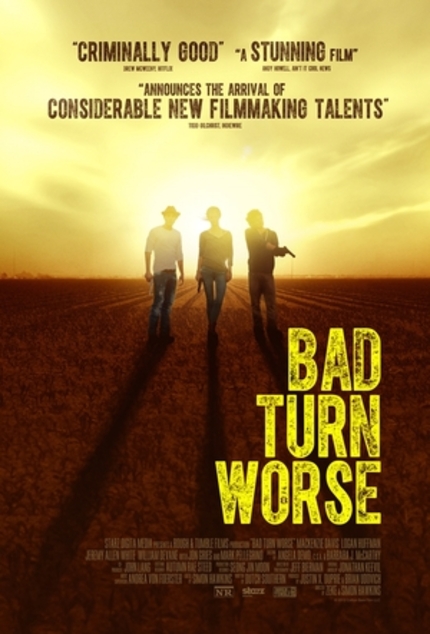 The feature debut from directorial siblings Simon and Zeke Hawkins is a tense and earthy film noir that wears its pulp influences proudly on its sleeve as it weaves a tale of love, betrayal and escape through the underbelly of the barren Texas wilderness.

From its opening moments, Bad Turn Worse (formerly titled We Gotta Get Out Of This Place) - the first feature from the New York City-born Hawkins brothers - declares its love for hard-boiled crime writer Jim Thompson (the man responsible for such noir classics as The Getaway and After Dark, My Sweet). A young couple hanging out in a diner momentarily discuss the correct vernacular for traditional southern cooking, before turning their attentions to the merits of the acclaimed pulp fiction author himself.

While they may appear to be from this small, near-desolate Texas cotton town, Sue (Mackenzie Davis)and Bobby (Jeremy Allen White) clearly yearn for something more, and she at least displays the scholastic chops to accomplish it too. As it transpires, both Sue and Bobby are on the eve of their escape - not eloping together - but leaving a future in the cotton mills behind for the greener pastures of a college education.

But it's not only their small town roots these two ambitious youngsters yearn to leave behind, as we soon discover, but also Sue's boyfriend, BJ (Logan Huffman), a simple-minded loose canon more at home in their current surroundings, but who unbeknownst to the others, has just ripped off local heavy, Giff (Mark Pellgrino). Before long, blood has been spilled, loyalties have been tested and all three are forced to stage a heist none of them are in any way adequately equipped to pull off.

The biggest strength of Bad Turn Worse is, fortunately perhaps, its beautifully desperate sense of place. The Hawkins brothers paint the Texan countryside as a hopeless wasteland on the cusp of decay, where the community clings to a failing local industry, and anyone with half a tank of gas and a glimmer of ambition is fleeing for the nearest city...which could not feel further away. The emptiness of the countryside is suffocating, and the idea that friends would screw each other over for the chance to start anew has never felt more plausible or appealing.

The real drama of Dutch Southern's screenplay, however, is in its characters and the beautifully drawn love triangle that is predestined to tear itself apart. Sue is intelligent, beautiful and determined to make something more of herself, while retaining a down-to-earth girl-next-door demeanour that makes her deceptively approachable and trustworthy. Bobby is the well-meaning but perhaps not-smart-enough hero of sorts, but this being film noir means he's about to be taken for one hell of a ride. BJ, on the other hand, is loud, charismatic, and constantly borders on the dickish and infuriating. He just screams trouble and true to form, delivers in spades.

If Bad Turn Worse has a flaw, it's that it is wholly committed to its pulp roots, and even with its twists and turns, strikes its narrative beats with a passionate, yet admittedly somewhat predictable, exuberance. From the setting, to the broadly drawn characters, and the initial predicament that spirals rapidly downhill, the Hawkins brothers pilot their tense, gripping and entertaining thriller with an assured confidence, but knowing audiences should have little trouble figuring out where it's headed.

The performances are strong throughout, particularly from Mackenzie Davis and Jeremy Allen White as the young lovers at the centre of this maelstrom. There's a rounded quality to their characters and performances, that is slightly lacking in Logan Huffman and Mark Pellegrino's larger-than-life villains. It's a shame, because Giff is given a sensational introduction, immediately wrong-footing both the protagonists and, more importantly, the audience, and while Pellegrino is always strong, Giff is never as unpredictable or truly frightening again. The great William Devane also pops up, but sadly his arrival comes too late to make a significant impact.

These quibbles are minor, however, and are included as much to manage future audience expectations, for what is, at the end of the day, a crackling small town thriller that deserves to be sought out. Looking at recent Thompson adaptations, in particular Michael Winterbottom's highly underrated The Killer Inside Me, Southern's script captures that tone and dystopic worldview so well that you forget this film is an original property. Zeke and Simon Hawkins display incredible talent here, handling their actors with confidence, creating atmosphere you can taste and building incredible tension throughout, and Bad Turn Worse teases at a fruitful career ahead.

Review originally published during the Toronto International Film Festival in September 2013, when the film was known as We Gotta Get Out of This Place. It opens in select theaters and will also be available via various video on demand outlets as well as iTunes on Friday, November 14. Visit the official Facebook page for more information.

More about We Gotta Get Out Of This Place