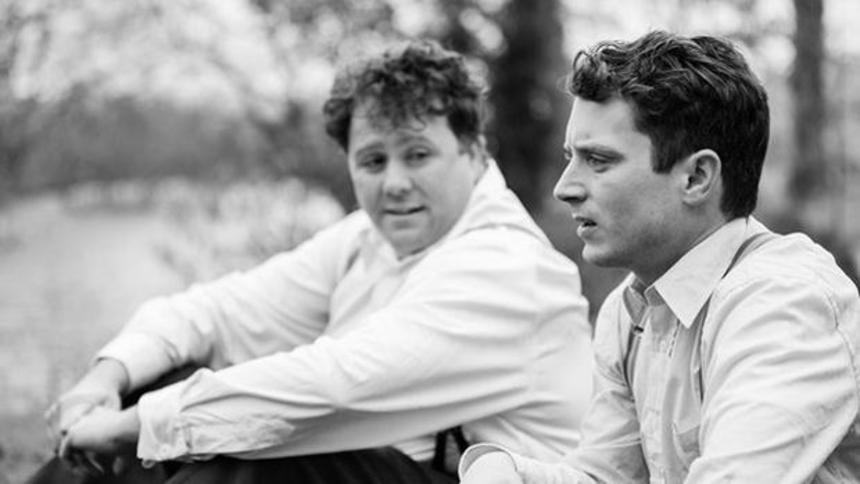 Wales' most famous literary son, Dylan Thomas (A Child's Christmas in Wales, Under Milk Wood) led a relatively short life, but a successful one, one that has not, until now, appeared much on screen. Set Fire to the Stars premiered earlier this year at the Edinburgh International Film Festival and is set for release in the UK on November 7th.

The film stars Elijah Wood as John M. Brinnin, an American poet and critic who is put in charge of organizing Thomas' first US tour. Thomas (Celyn Jones) proves more than a handful, and the two go into retreat, where Brinnin must save his hero and get him stateside.

The film is directed by Andy Goddard (Torchwood, Downton Abbey), and rounding out an excellent cast are Shirley Henderson, Steven Mackintosh and Kelly Reilly. The trailer shows a wonderful stylized feel, connecting with its time period (the early 1950s) in rich black-and-white, emphasizing the poetry in both form and content. Thomas himself was a original rebel, unwilling to align with any literary movement. Hopefully the film will follow suit.

Do you feel this content is inappropriate or infringes upon your rights? Click here to report it, or see our DMCA policy.
Celyn JonesElijah WoodSet Fire to the StarsAndy GoddardKelly ReillySteven MackintoshBiographyDrama