Review: SET FIRE TO THE STARS, A Tribute To A Poet, Poetry, And Cinema 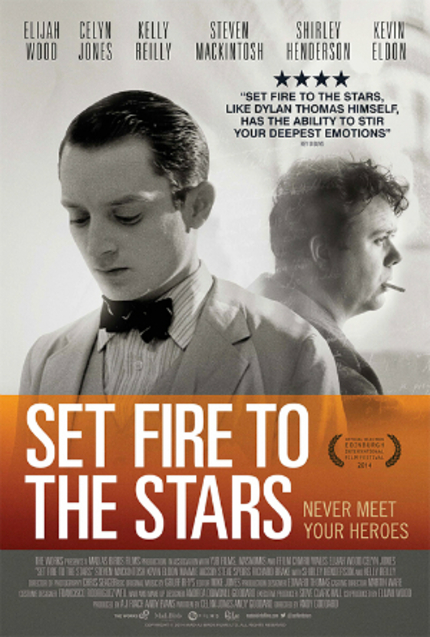 It isn't easy to portray the literary arts on screen. Apart from having someone recite from a book (which can become tedious), the challenge becomes how to find the connection between the writer being portrayed, their work, and how that work can connect to the audience.

In bringing a larger-than-life poet such as Dylan Thomas to the screen, arguably not well known outside of the UK except to dedicated poetry lovers, the challenge is greater still: how do you convince your audience that this Welsh lyric poet from the 1940s and 1950s is worthy of screen time, and that his life and work are relevant and interesting?

If you are director/writer Andy Goddard and co-writer/actor Celyn Jones, you focus on a small series of events, and find a supporting character from Thomas' life through whom the audience can identify, you eschew the normal biopic traps of excessive explanation and exposition, and you find the poetry in production design, cinematography, and a note-perfect cast. Set Fire to the Stars is this, an intimate and yet profoundly worldly film about the pain of expression, the isolation of genius, and the desperation of loneliness and love.

John Malcolm Brinnin (Elijah Wood) is an American poet and professor who has organized Thomas' first US tour. He unwittingly agrees to look after the Welshman, and discovers a drunken reprobate in dire health who refuses all attempts at reason and contact with his wife back home in Wales. Attempting to keep Thomas out of trouble, Brinnin takes him to his family cottage in Connecticut for some solitude in reflection, which ends up being almost as damaging as New York.

The film opens with Brinnin reciting the names of locations (where he plans to send Thomas); this is in part exposition, but more to the point, it sets the dialogue in motion: as this is a film about a poet, the dialogue itself must be a kind of poetry. While some dialogue is necessarily expositional, Goddard and Jones do not let it slip away. The lines are almost debates in the nature of language and expression; the actors, both leads and supporting, lean into this dialogue as oppose to performing it, lending it a nuance that allows the audience to slip into its lilt almost without noticing.

As Brinnin says, Thomas was one of the greatest lyrical poets of his age (or any age), never conforming to any particular school or movement, hence his lack of place not only in much of the poetry world, but especially in America, where his Welsh background, to Americans, is a quaint novelty; but to Thomas (and Brinnin), it is the blood that wells up from deep inside. Thomas finds poetry in the names of American candy bars and other curious food items; Brinnin finds it in his own discontent with academia, forced to confront his own inadequacy in the face of Thomas' personal failings and equally strong intelligence.

Setting the stage for this dialogue, Goddard, cinematographer Chris Seager and production designer Edward Thomas make some key decisions: first, the film is in black and white; while this is fitting in one part given the time period of the film, it is also deliberate, so as the audience can concentrate on dialogue, movement and expression.

The indoor spaces (which constitute the majority of the film) are generally tight and claustrophobic, purposefully so, as to accentuate Thomas' large physical and emotional presence, spaces in which (again) he does not quite fit, an at times literal bull in a china shop. Goddard and Seager keep standard cinematic language, such as framing only that which is deemed narratively necessary or shot/reverse shot, to a minimum; instead, scenes are often shot in a theatrical style, containing the characters while at the same time freeing movement.

Stories are told while the camera stays on the actors' faces at odd angles and with strange lighting; in one scene, John's country neighbour Shirley (the always wonderful Shirley Henderson) tells a horror story, a flashlight shining up her face, emphasizing the odd encounter with Thomas and the rather macabre tale which might seem out of place among the lyricism.

The same scene also has Brittin tell a horror story, but a true one from his childhood, and the camera looks down on his in his shame and pain. When Thomas gives a private reading to the elite of Yale (and later insults them), his face is rounded out, with an almost fish-eye lens, the Old World madman among the New World snobs who set themselves too high. It seems that everyone is putting on a theatrical performance, but only Thomas is self-aware, and willing to call bullshit when he sees it.

The stand-out feature of the poetic extension is by far the incredible score by Gruff Rhys. Any good score should reflect the tone on screen, but Rhys goes beyond this to reflect the poetry within. While beginning with a beatnik poetry song (to reflect the American setting), he moves the more classically lyrical, to the discordant, to the downright maddening; the music speaks as the line breaks in the poetry of the dialogue, the space between stanzas the give the audience reflection and fill in the emptiness when words cannot give full expression.

Wood has been seen frequently of late in films of a more fantastical genre (in which he is always good), but he proves he can more than hold his own in the 'straight man' role to Jones' Thomas. Brinnin would admit to his own lack of success as a poet, though that would be hard not to admit after spending time with Thomas. Wood does not allow Brinnin to merely be a shadow character or adjunct; he is fully fledged in his first scenes, and watching his own displacement and disintegration is equally fascinating to Thomas'.

I'll admit, I've only seen Jones in a few UK television shows; but a lot of actors would have blundered this role, giving too much ego to the largess of Thomas, playing him as a caricature. And while Jones knows the scenes in which the poet must be larger-than-life, he finds the shame and pain, both physical and emotional, without asking the audience to necessarily love him in spite of his many failings.

If I have a criticism of the film, it might be that, the few scenes in which exposition of the plot is necessary could have been shorter; Goddard succeeds in conveying the situation in short order, that I kept waiting for these scenes to end so the deeper poetry would return. Set Fire to the Stars stands out as a tribute not only to a poet, but to poetry, and how cinema can find its own way to convey poetry, through its own lyricism.

Review originally published during the film's UK theatrical release in November 2014. It opens in select theaters in the U.S. via Strand Releasing on Friday, June 12.

Set Fire to the Stars

Do you feel this content is inappropriate or infringes upon your rights? Click here to report it, or see our DMCA policy.
Andy GoddardCelyn JonesDylan ThomasElijah WoodJohn Malcolm BrinninKelly ReillyBiographyDrama