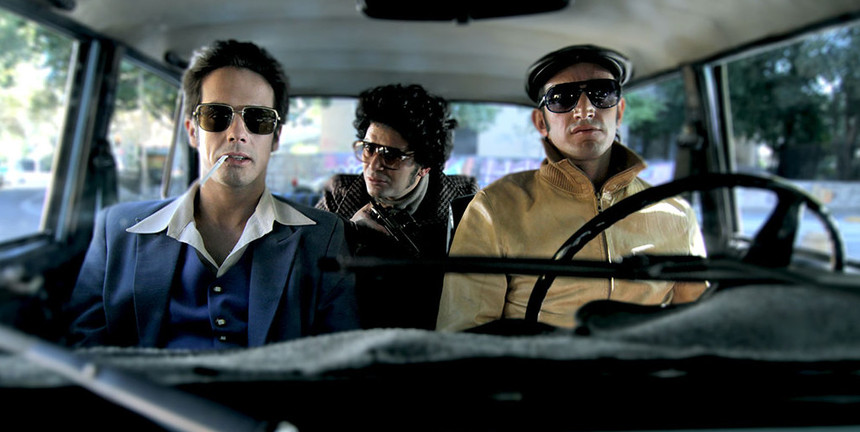 Though there are still three months left in the year and To Kill a Man has already been chosen for the Oscars as the Chilean representative (and rightfully so) I might say that the latest film by action-oriented director Ernesto Díaz Espinoza is the best Chilean film of 2014.

This is a different sort of film from the Fantastic Film Festival favorite director, who doesn't play it entirely straight and serious like in his recent Redeemer - also shown at this year's Valdivia Film Festival, but Out of Competition - but filmed in a much more clean way, without the obvious references to genre and exploitation cinema that have driven much of his earlier work. Though still somewhat a love letter to the crime pictures made in Italy in the 60's and 70's, the film itself is about friendship and is filmed with a more calm style than any of his other films made til this point, without a need for the ridiculous over the top style that he demonstrated in films like Bring me the Head of the Machine Gun Woman or Kiltro, but still making slight references to it.

Three friends from school have got together to follow the dream of Brocco of making a movie called 'Santiago Violenta', and using the apparatus that his independent producing company has, he manages to film a teaser and many other scenes so he can pitch it. But the reality is far from perfect, most of the jobs that Brocco has are weddings and other celebrations of people that he edits in unique and distinct ways that rarely please the client. He needs money.

So does one of his friends, Noel, who has to protect the inventions that his father has made but lost in many gambles with destiny. The only one that has some success is Mauro, also protagonist of the film that Brocco is making, who works at his father-in-law's office as an architect who barely does anything yet is maintained by his wife, who also happens to work there.

It is in one of their nights together that these three friends find themselves in a weird crime story, as the owner of the bar that they went to, an old lady that calls herself Marilyn, is robbed by three women, who throw away a handbag over the wall of a motel, in which they try to recover it. It is in that first adventure that they realize how hard it really is and how much it will challenge their way of seeing Santiago and what they'd be willing to do.

It is an entertaining and many times funny romp with friends and not much more, and it doesn't need to be anything else than that, even as it comes to a closure and the film becomes weirder and even hard to understand, one can't help but laugh at the plot and how they end up being so involved in crime that even them can't believe how deep in the water they truly are.

Just like the logline says, they have to leave the alcoholic beverage (piscolas) behind and they must take up guns instead (pistolas), so they can save themselves. It is not a perfect film, as if at any time you start to analyze the plot itself, it makes little sense where they end up and how they started the whole ordeal, but it finally doesn't matter, it's a great time at the movies, and I guess, when it's all said and done, that's what counts.

Do you feel this content is inappropriate or infringes upon your rights? Click here to report it, or see our DMCA policy.
Ernesto Díaz EspinozaDavid Vera-MeiggsMauricio DiocaresMatías OviedoNicolás SaavedraShenda RománActionComedyCrime