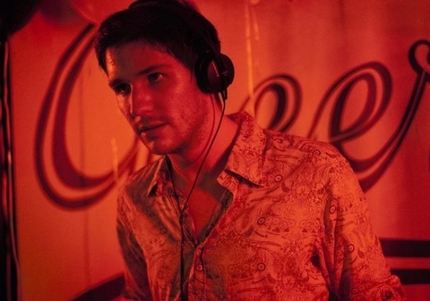 The other day, I saw a college kid wearing a T- shirt that said, "In school now just to be a wage slave later." I seriously considered giving the kid a hug. And I could've easily regarded it as some ironic hipster shit. But after watching the talented Mia Hansen-Løve's new film Eden, it hit me as extremely poignant. Co-written by her brother Sven, the film is a sprawling and epic look back at the 90s' French electronic dance music scene. And they do an amazing job capturing the look and feel of that decade. But more so, the film is about life.

Eden charts about 20 years in the life of Paul (Félix de Givry), starting in 1992. He is a big raver and into music. He and his friend Stan (Hugo Conzelman) form a garage (Paul affectingly explains - house music with more soul and disco) DJ duo called Cheers, despite his mom (Atom Egoyan regular Arsinée Khanjian)'s disapproval.

Their group of friends includes talented graphic artist Cyril (enigmatic Roman Kolinka), a fellow DJ team, Respect (Paul Spera and Laurent Cazanave) and a drugged up, wayward producer Arnaud (comedian Vincent Macaigne in a role that is tailored for him). It's around this time they also acquaint Thomas and Guy-Man, the duo later known as Daft Punk (who provides much of the music for the film). We observe as they all strive for the limelight. Time slips by. Paul has a brief fling with a cute American girl, Julia (Greta Gerwig), then gets involved with a wild but moody tomboy, Louise (Pauline Etienne). Cheers becomes a moderate success in the Paris club scene. It's an exciting thing to follow one's passion and become successful.

The signs of decline appear when fame takes Cheers to America. They get to perform at P.S. 1-- a former public school turned into one of the hottest New York cultural institutions, and which has been hosting outdoor dance parties since the 2000s. They then go to Chicago. Paul reunites with Julia who is now married (her husband is played by Simon Killer's Brady Corbet) and visibly pregnant. She commends him for still pursuing his passion after all these years. Jealous and tired of the scene, Louise has a breakdown. Then Paul gets the news of Cyril's suicide.

Even though they pack the club, night after night, with their music and DJ skills, it's a profession that doesn't make tons of money. To keep up the appearances, Paul gets deeper and deeper into a financial hole and his drug habits get out of hand. Friendship falters and people around him grow up and get real jobs. Paul and Stan's passion remain, but it's the times and music that are changing.

Eden's scope and ambition are massive. But Hansen-Løve pulls it off with grace. With the beats pumping constantly and large crowds having a good time, you can easily feel that DJ-ing is like an addiction you can't get rid of easily. Sadness of time passing is there, but Hansen-Løve refuses to make it sentimental. This was the part of one's life and passion. There are no regrets for doing something you loved and believed that it was a right path to take.

Every cultural phenomenon eventually fades and falls out of favor. The film follows the typical movie trajectory of the rise and fall of a protagonist. But the film is not a nostalgia trip. What's amazing about Eden, just like Hansen-Løve's last film, Goodbye First love, is her ability to make you aware of the poignancy of the passing of time in an extraordinarily personal way. Obviously the film is not for everyone. The specificity of the film's setting and subject matter might hinder your interest in seeing it. But for me and many others like me, who lived through the 90s, that culturally bleh decade, as a young adult full of hopes and dreams, Eden will linger in your head and gain in poignancy over the years to come.

Do you feel this content is inappropriate or infringes upon your rights? Click here to report it, or see our DMCA policy.
edenelectronic musicFélix de GivryMia Hansen-Løvenew york film fest 2014NYFF