New York 2014 Review: BIRDMAN, A Visual and Comedic Feast For The Eyes and Mind 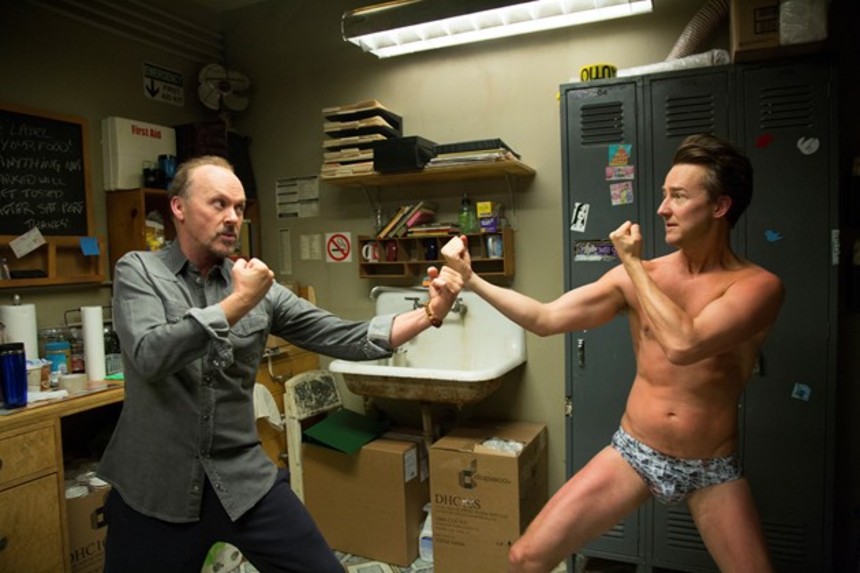 This year's New York Film Festival came to a satisfying conclusion with one of its best selections, Birdman, or (The Unexpected Virtue of Ignorance), the oddly titled (and punctuated) fifth feature by acclaimed Mexican filmmaker Alejandro G. Iñárritu.

Returning in spirit (if not in tone or content) to the brash exuberance of Amores Perros, his 2000 debut feature, Birdman marks a major departure from his previous trio of features - 21 Grams, Babel, and Biutiful - in which Iñárritu wore the mantle of Serious Filmmaker Taking on Important Themes, to increasingly overwrought and self-important results.

In his latest outing, Iñárritu successfully throws off his self-suffocating pretensions to deliver a satirical, visually audacious movie, crackling with wicked humor and aesthetic bravado, targeting artistic types and pop culture trends with laser precision. Among these are: actors (especially those of the self-conscious Method variety); Hollywood superhero franchise filmmaking and the "serious" actors who cash huge paychecks making them; Broadway and the theater people who resent Hollywood stars invading their turf; and the pervasive and trivializing nature of social media.
And that's just for starters: Birdman's screenplay (credited to no less than four writers - Iñárritu, Nicolas Giacobone, Alexander Dinelaris Jr., and Armando Bo) is stuffed, and maybe overstuffed, with all sorts of subjects: fatherhood, mental breakdown, the influence and value of critics, the perils of literary adaptation, the desperation of conscious career comebacks. Add to that some liberal touches of magic realism and audacious camerawork by ace cinematographer Emmanuel Lubezki - whose work in Gravity dazzled audiences at this time last year and is no less impressive here - and you begin to get a sense of the ambitions Birdman strives for, and mostly achieves. I'll spare you the obvious avian metaphorical clichés that can easily come into play here in describing the great work on display by all involved, but there are definitely some heights reached here.
One person who undeniably meets the challenges of this material is Michael Keaton, who delivers one of the finest performances of his career as Birdman's central character Riggan Thomson.

Thomson - who is introduced to us as he casually levitates off the ground in the lotus position - is an actor who achieved his greatest fame as the title character of the Birdman superhero series. After saying no to Birdman 4, and turning his back on Hollywood stardom, he has struggled ever since and fears that he is regarded by many as a has-been. Riggan has now put everything on the line - personally, psychologically, and financially - to put on a Broadway play, an adaptation of Raymond Carver's classic short story "What We Talk About When We Talk About Love," a story which has great personal significance to Riggan.

Probably ill-advisedly, he decides to take on the roles of writing, directing, and starring in the play, going all-in in this last, desperate stab at artistic respectability and renewed cultural relevance. Birdman follows Riggan as he begins to crack at the seams from the pressure he has put upon himself. Right away, the possibility is raised that he is becoming mentally unstable. His own voice, as the Birdman character, echoes in his head, with both self-aggrandizing pronouncements and snarky asides mocking the pretensions of his ambitions. He also seems to be able to move objects by telekinesis (a power shared by Birdman), but the fact that this only seems to happen when he is alone calls into question whether this is a real ability Riggan possesses, or simply a delusion.
The cast of characters Riggan surrounds himself with, in both the play and real life, don't make his existence any easier. After one of his actors has a freak accident during a read-through, incapacitating him very shortly before previews are to begin, Riggan finds a replacement in film and stage star, and all-around jerk, Mike Shiner (Edward Norton), an ex-boyfriend of Lesley (Naomi Watts), one of the actresses in the play. 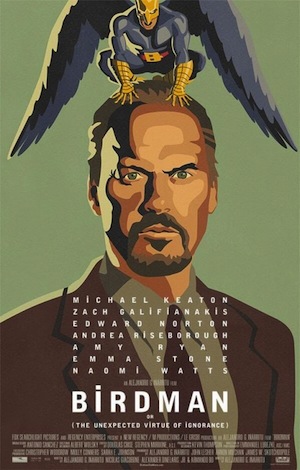 Mike proves to be indeed a brilliant actor, but also a megalomaniacal and destabilizing influence. During his very first read-through with Riggan, Mike completely takes over the session by directing Riggan and rewriting his script. Things only go downhill from there during the previews, with Mike breaking character and throwing a tantrum onstage when he has to drink water instead of real gin onstage, and attempting to have actual sex onstage with Lesley in front of the audience. Riggan tries to fire Mike, but as his long-suffering producer/lawyer/confidante Jake (Zach Galifianakis, very effectively playing the straight man) reminds him, Mike single-handedly assures sold-out houses.
Adding to the complications are Riggan's daughter Sam (Emma Stone), fresh out of rehab, who still resents Riggan for being such a lousy and often absent father throughout her childhood. Also, there's Laura (Andrea Riseborough), another actress in the play who's Riggan's current girlfriend, and who may be pregnant by him. And since there's not enough turmoil around Riggan, there's also the presence of his ex-wife Sylvia (Amy Ryan), who visits him backstage from time to time. The emotional stew of the many personalities becomes more chaotic, and comedic, as opening night looms, and Riggan finds it increasingly impossible to hold everything together.
Birdman very cannily makes use of the personas of its actors, and their real lives and careers outside the fictional text of the film to create a very engaging meta-text that gives its satirical energies a particularly potent charge. There is, of course, the obvious significance of Riggan and Michael Keaton paralleling each other somewhat by both of them being largely identified with a superhero character, as well as including Edward Norton and Emma Stone, both of whom have featured in superhero franchises. Beyond this, however, there are much larger issues of the intersections of life and art that these actors, as well as the entire cast, clearly have great relish sinking their collective teeth into, and this clearly shows in the exuberant quality of their performances, which are often very funny but don't neglect the pathos beneath their surfaces.
The visual structure and form of Birdman proves to be as great an attraction as the film's stars. The often stunningly audacious cinematography by Emmanuel Lubezki creates the illusion of the entire film occurring within a single take, the camera moving in sinuous long takes following the characters and often getting right up into their faces. This makes the environs of the St. James Theater, where practically all the film's action takes place, as its own universe, which envelops the viewer along with the characters. This illusory single shot encompasses several days of screen time, and appropriately for a piece that takes place in the world of theater, could illustrate a literal reading of Aristotle's theories of the classical dramatic unities of action, place and time. The single-shot technique of Birdman, combined with Antonio Sanchez's propulsive, insistent jazz drumming score, give this film a feel and atmosphere quite unlike any other you're likely to see.
Although Birdman has some definite flaws, such as the women characters being considerably less well-drawn than Riggan or Mike Shiner - especially a depiction of a theater critic which comes across more as caustic score-settling rather than incisive satire - and a rather muddled conclusion, it is for the most part an incredibly impressive achievement in artistry and entertainment that will certainly be a part of this award season's conversation.
Birdman opens in the U.S. on October 17.