Toronto 2014 Review: Roskam's THE DROP Is A Top Notch Crimer And Fitting Goodbye For Gandolfini 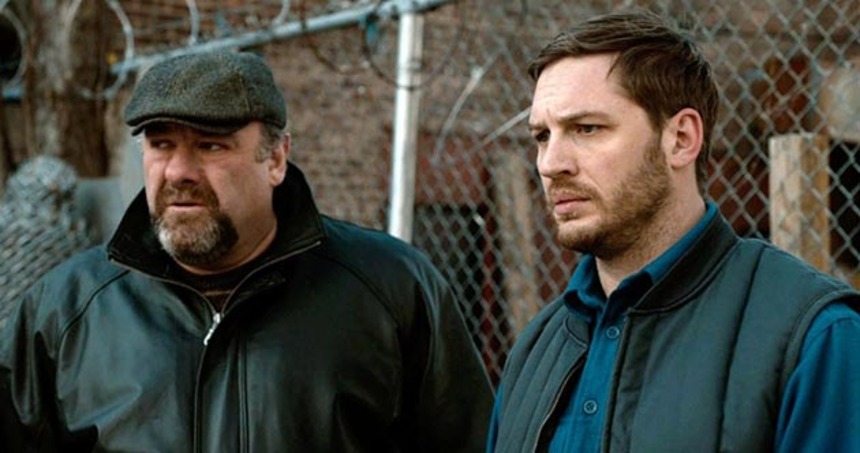 Michael Roskam burst onto the scene three years ago with his Belgian bovine crime drama Bullhead. The film thrilled audiences from Berlin to Fantastic Fest and went on to score a nomination for the Best Foreign Language Oscar. We've been waiting patiently to see what Roskam would do next, and the film gods have smiled upon us as Roskam's sophomore outing is every bit the apt follow-up that Bullhead deserves. A taut crime drama in Roskam's signature slow burn style, The Drop announces Roskam to English language audiences in a big way.

Set on the mean streets of Brooklyn, The Drop tells the story of taciturn bartender Bob Saginowski, played exquisitely by Tom Hardy. Bob pours drinks at his cousin Marv's place, Cousin Marv's. But while Marv (James Gandolfini in his final role) lends his name to the joint, he hasn't owned it in years since being strong armed out of the place by the Chechen mob. Now Marv, and by extension Bob, act as a drop spot for the mob's occasional large cash movements. Which is all fine and good, as far as Bob is concerned, until one day, Cousin Marv's gets robbed.

On top of the looming threat of the Chechens, Bob has his own personal issues to deal with. These mainly surround a pit-bull puppy that Bob finds in a garbage can outside the attractive Nadia's house (Noomi Rapace). Learning to care for the dog causes plenty of strife for the socially awkward Bob, but it also brings him closer to Nadia. This draws the attention of Nadia's troubled ex-con ex-boyfriend Eric. Between Eric and the mafia, Bob has his hands full. And when the two threaten to intersect, the shit really looks likely to hit the fan.

On top of introducing us to Roskam, Bullhead also marked the arrival of Matthias Schoenaerts (who went on to star in Rust and Bone, among other films). Schoenaerts returns in The Drop as the demented ex-boyfriend Eric. While certainly a smaller role than Bullhead's Jacky, Schoenaerts plays Eric's unstable persona with frightening vigor, pointing to more great things to come from the Belgian.

But Schoenaerts is just one piece of an extremely well put-together cast. This film's most defining characteristic is the stellar acting across the board. It's a fitting goodbye for Gandolfini to see him stretch his muscles one last time in a mafia-infused role. But make no mistake; this is Tom Hardy's movie. His Joe Saginowski is a quiet man whose eye's betray a dangerous streak waiting to flare up. He's a dynamic character with an eerie trustworthiness. No one could play it as well as Hardy and he deserves much praise for the role (if not more formal awards).

A final word of praise should be saved for the excellent script by Dennis Lehane. Only the best authors/screenwriters can make such a complicated plot feel so simple. Roskam wrote Bullhead himself, and as he put it, after reading The Drop, he wished he'd written this one as well. However the two make an excellent duo. And with the help of some of the best acting of the year, there's one thing that Roskam can be very proud of: The Drop is about as far away from a sophomore slump as possible.

Do you feel this content is inappropriate or infringes upon your rights? Click here to report it, or see our DMCA policy.
James GandolfiniMatthias SchoenaertsMichael RoskamNoomi RapaceTom HardyToronto

More about The Drop