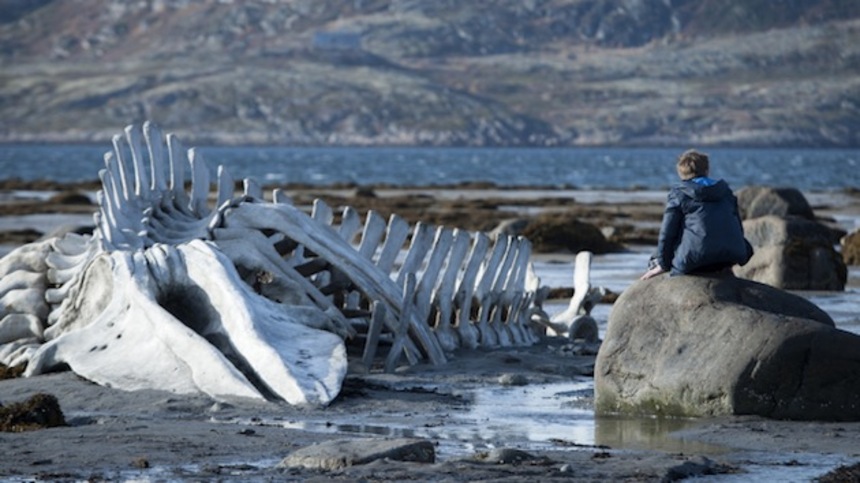 A rundown fishing town on the coast of the Arctic Ocean is the rugged edge-of-the-world stage for Andrey Zvyagintsev's complex, but quite accessible, new film. There is a visual mastery of relating wide open natural spaces, with precise man-made interiors, present in all of his work, but taken to new heights here.

Leviathan tells the tale of a man losing his land, losing his wife to his best friend, and losing his son to anger. It scales this Job-sian human tragedy up to savage some sacred-cows, the Russian institutions of community, the state and the orthodox church. That this is based on a true story is shocking (and utterly believable) in both the specifics and the universality. You certainly don't have to speak Russian to understand human flaws and failure.
Kolya is living on the best piece of land in town, on a hilltop which overlooks the river as it joins the Ocean. The towns corrupt mayor, Vadim, is intent on seizing this property for a choice development project and is willing the exploit a property rights loophole, and his control over the municipal courts and police, to get his way. In a Kafka-esque single-take shot, the court baliff reads, at robotic speed, several pages of policy and verdict on why Kolya's appeal to keep his property is being denied. Shortly thereafter Kolya is arrested and put in prison for filing paperwork.
His long-time army pal who is now a big-shot Moscow lawyer, Dima first tries conventional bureaucratic methods but soon take another tact, attempting to blackmail Vadim, a heavy, belligerent brute who has more skeletons in his closet than Toronto Mayor Rob Ford and is up for re-election. A lot of vodka is consumed, a lot of cigarettes are smoked. Men confront one another in intoxicated states. The local teens drink and smoke in one of the towns abandoned churches, indoctrinating themselves into what will likely be their fates as adults in the local fish processing plant. Images of gutted fish being sorted and processed cement the notion.
Another scene involves birthday party getaway to an isolated quarry to BBQ meat, drink vodka (of course) and shooting bottles. When the supply of bottles is exhausted (in part because the birthday boy is packing a Kalashnakov automatic rifle) targets are switched to portraits of Russian presidents. Near the shooting gallery is a waterfall, which we only get a glance, of two boys tensely navigating the rocks and froth at the summit. It echoes the opening moments in the Zvyagintsev's The Return. One boy witnesses Dima and Kolya's wife, Lilya in coitus, shattering things on the home front, pitting Kolya and Lilya's mutual friends against each other and sending their son Roma running off into his own confused wilderness of adolescence.
Kolya (and for that matter, Dima, Lilya and Vadim) want reasons and answers for their woes and conflicts, but are left as alone in the wilderness as Roma. Even as there are occasional winners in the game, the mortar of modern Russia is mixed with the crumbled bones of its citizenry. A character mentions offhand that no fortune was ever amassed without sin and suffering. In personal or political circles this is likely a truism if there ever was one. The final gut-punch of the film (allow me to reiterate that this is a true story) is feral in its undiluted satire. And the pounding score drives home the epic nature of this story of small people rolled over by the body of the whale.
Whale skeletons and fishing boats share equal space on the beach with a corpse whose fate is a mystery, but both institutions and community have little problem crafting meaning around it. Far from a pleasant experience, where the power of forgiveness is a whisper in a hurricane, Leviathan is masterclass in imagery and storytelling (the screenplay won the prize a Cannes earlier this year) one of the best films of the year, and showcases a director at the absolute top of his craft who is still willing to lob a grenade into the power circles of his country.
Tweet Post Submit

Do you feel this content is inappropriate or infringes upon your rights? Click here to report it, or see our DMCA policy.
RussianTIFF 2014toronto film festival