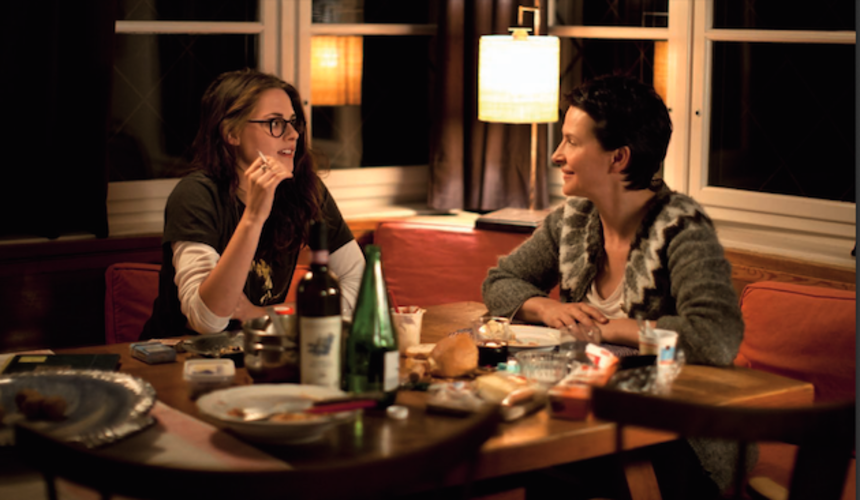 The eponymous image of Clouds of Sils Maria features a heavenly mist snaking its way through mountain peaks like a river, the rocks frozen in time, immutable, the clouds in perpetual motion.
It is shown as shot for Olivier Assayas in 2014, and the characters in the film at one point watch the 1924 Arnold Fank silent, black and white documentary The Cloud Phenomena of Majola. The technology and aesthetics have changed, but filmmaking keeps on rumbling chaotically along as the images themselves become fixed and un-aging.
No matter how many films Assayas makes, he cannot help himself from being a film critic-historian. As with many of the auteur directors of the French New Wave a generation or more before him, he wrote for Cahiers Du Cinema before becoming a hot-shot young director. Throughout his career has has often made films that examine the business, chaos and soul of filmmaking, in France and abroad.
Irma Vep had New Wave icon Jean Pierre Leaud playing an addled director who casts Maggie Cheung out the Hong Kong action cinema of Johnnie To and Jackie Chan and dropped her onto a dysfunctional Parisian film set to shoot an avant-garde remake of iconic silent french serial Les Vampires and Demon Lover wrapped a tangled corporate thriller around the global video and web distribution rights of anime tentacle pornography.
Regardless of what subjects the director tackles, what is interesting about his cinema is that he has always favoured actors and performances to allow his ideas to flow out onto he screen over cinematography and editing.
Lately, Assayas has been pre-occupied with age and youth, and has left behind, mostly, any genre trappings to make films about the passage of time and how it changes people. In Clouds of Sils Maria, he has Juliette Binoche playing a fictional version of herself named Maria Enders. An actress at a point in her career where she is an international movie who did a stint in Hollywood blockbusters before returning to the European art house and stage.
A young director asks her to appear in his revival of the play that made her famous, only this time she will be playing the broken-down wealthy businesswoman part instead of the aggressive and domineering young personal assistant who sexually dominates the stage. The play in the film bears remarkable similarity to Alain Corneau's final film, Love Crime (which was recently remade by Brian DePalma as Passion.)
The middle portion of Clouds of Sils Maria, the best portion of the film, sees Enders living in isolation in the Swiss mountains, negotiating a messy divorce and occasionally going for a hike all the while rehearsing the part with her own personal assistant. Kristen Stewart in tangled hair and random tattoos, exuding the casual confidence and 'above-it-all' attitude that often gets the Twilight-actress excruciated by the media at Awards shows, delivers a convincing, performance as the personal assistant, Valentine.
The rehearsal starts to mimic the content of the play, in subtle ways, only with many more messy complications. Enders is trying to play the older part, but cannot shake her desire and her memories of the younger. There is possible sexual attraction between Binoche and Stewart, but really it is more about the envy of unfettered freedom of youth, as opposed to the obligation and baggage of age.
An overly simple read of the film would be that the personal assistant is merely a figment of the actress's psyche, Assays peppers the visual language of the film with many hints and visual cues, notably strange cellphone reception on a train in the films opening, and a stylized double-exposed driving sequence when Stewart returns from a sexual tryst with a photographer and vomits on the side of the road. Clouds of Sils Maria would make a curious double-bill with Binoche's other recent breezy self-reflective puzzle, Certified Copy. You can try to parse the details of what is going on in both films, but really you should just sit back and take in the universal human bits that make both films great. The truth however, that cinema is an object, and our own perspective, and viewpoints shape what is perceived to be going on, is the brain of the film, while Juliette Binoche essaying an aging actress grappling with this, is the heart.
The emotionally vulnerable aging actress is also obsessed with the young Hollywood tabloid train wreck who is cast in the role that made Enders famous. A small role occupied by Chloe-Grace Moretz has some fun with TMZ internet celebrity, old-timer european paparazzo, and pop-blockbuster cinema. There is even a silly, sci-fi action movie created in the film, featuring Moretz's character that is exposition heavy to the point of hilarity.
But watching the boozy  discussion of Ender's and Valantine on how the ideas and anxieties, clumsily expressed in this sci-fi movie are no different than the pop cinema 50 years ago, only with different wardrobe and trappings. This is not the heart of the film, but it is the director, ever being the critic, allowing the actors to essay his thoughts with their craft.
Sign-In to Vote
Tweet 0 Submit

Ok, I saw it last night, and I appreciate your review, but Stewart wasn't only convicing, she was freaking amazing (as well as Juliette), I'd say oscar worthy even. I really loved it, and I am not a fan of KS nor Twilight (nothing wrong with that), I am huge fan of JB though. Olivier Assayas did a wonderful job, I am going to watch all of his films because of this one.

You should, and maybe I didn't state it strong enough, but I agree, it is a fantastic performance from K-Stu.

The Devil is in the Details!

Ahh enjoy. I love me some Assayas. Irma Vep is one of my all time favorites, Demonlover is great and I think Something in the Air is under appreciated, Can't wait to watch this one!

playing a version of "yourself" is not as simple as you think. I might even say it's more difficult. Also, Stewart is not really playing "herself." She's not an actress in the movie - Chloe Grace Moretz is more like a Kristen Stewart kind of character.