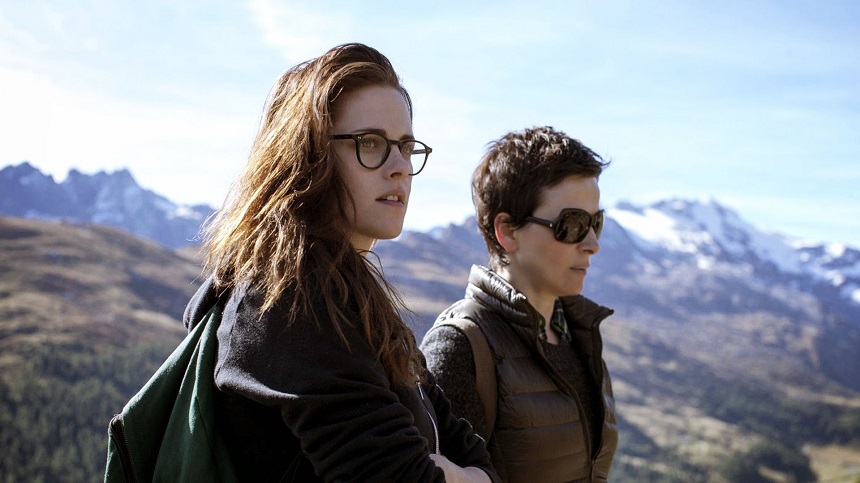 Though known principally for restoring and presenting classics of cinema for home video, The Criterion Collection's mission doesn't preclude occasionally pumping out a contemporary release with just as much thought and consideration. Such a release is Olivier Assayas' 2014 film Clouds of Sils Maria, arriving on Blu-ray from Criterion next week as spine #822.

The disc boasts cover art that makes the film look like either a mountaineering murder mystery or an Adrian Lyne sex thriller. It's neither, though I'd certainly pay to see the B-side of this movie, same team and cast, which takes a crack at that. Instead, the majority of the film surrounds two women - Maria (Juliette Binoche) and Valentine (Kristen Stewart) - who are holed up in a chateau in the Swiss Alps, rehearsing for a play in which Maria will shortly appear. Maria is an archetypal, aging "star of stage and screen," and Valentine is her clever - arguably too clever for this job - personal assistant.

An introductory act sets the table (the author of the play gave teenaged Maria her first big break in a production of the same play, and he has just died; she will now appear in a new staging, playing the other lead, an older woman), and a denouement ties off the themes - but the majority of Clouds of Sils Maria is a two-hander with Binoche and Stewart, and an utterly absorbing one.

I'm aware that there's a sizeable cadre of film fans who remain convinced that Stewart is an affected, uninteresting actress. Sils Maria should put paid any such assumptions. Casting Stewart as Valentine was a brilliant choice by Assayas, and the younger actress not only holds her own formidably in her innumerable scenes against Binoche (who, let's face it, is incapable of giving a bad performance), but conveys a frustrated complexity in Val that not only supports the drama proper, but eventually morphs into a genuine extrapolation of the film's theme and imagery.

Clouds of Sils Maria works in a series of interlocked binaries: age's relationship with youth, art's relationship with commerce, self-awareness and its relationship with self-delusion, and all told with a distinctly female concern. Appropriately enough for a story about rehearsing a play, it's an exceedingly complex text - a marvel of written and performative layers that Assayas supports with gentle, effective staging, occasionally interspersed with ethereal jaunts into the Swiss mountains to see the eponymous clouds.

The play is called "Maloja Snake," named for a cloud phenomenon in those selfsame Swiss Alps, which gives Clouds of Sils Maria its name as well. This blurring of the lines between the layers of real life and artifice is both deep and wide: the contexts of real world, movie world, play world, and our world shift and move against one another throughout the film.

The screenplay is a virtual encyclopedia of neat tricks from a writing perspective, like having Maria and Valentine running lines from a play we haven't heard yet, slipping in and out of character with no warning to the audience, robbing us of the ability to see if they are speaking as themselves or as Sigrid and Helena, a younger woman / older woman lesbian couple around whom "Maloja Snake" is based. Naturally, this both enforces and interrogates the question of whether Maria and Valentine are talking about themselves, and by extension, the question of how art both frames and betrays our senses of identity - senses which are already being betrayed by the simple passage of time, as new perspectives enter culture, and ours slowly exits.

All of which conspires to make it sound like Clouds of Sils Maria is exceedingly dry. It's not. It's oftentimes quite funny (the scene where Valentine tries to convince Maria that there's some deeper thematic weight in a mutant science fiction movie they've just watched is both hysterically funny and a bit too disspiritingly on the nose for this writer!), breezily watchable, and charming in the lived-in warmth that Binoche and Stewart bring to their relationship, which is too intimate for employer/employee, but too constrained for friend/friend or lover/lover. (Some have criticized the film for its unwillingness to treat directly with the strongly implied sexual attraction that Maria has for Val.)

Clouds of Sils Maria was shot on 35mm and mastered in 2K for the Criterion Collection, creating a handsome presentation which keeps fine grain detail (particularly in the gorgeously ephemeral outdoor scenes in Switzerland) and colour definition. This carries over to one of the most interesting extras on the disc: Cloud Phenomena of Maloja, a silent 1924 documentary about Sils Maria's titular cloud formations (which appears in excerpted form in the film itself). Enhanced with a contemporary score, the film is not entirely complete (a few minutes have been lost to time) but is an intriguing find, and supports the themes of Clouds of Sils Maria nicely - especially as men from a hundred years ago stride along the same mountain ridges we see with Binoche and Stewart today.

We also have extensive interviews with Assayas, Binoche, and Stewart to round out this highly-recommended disc. Adding further layers to the film's reality distortion field, check out Assayas' comments about how his own early-career relationship with Juliette Binoche drove this later-career collaboration, which he wrote specifically for her.

Do you feel this content is inappropriate or infringes upon your rights? Click here to report it, or see our DMCA policy.
CriterionJuliette BinocheKristen StewartOlivier Assayasthe clouds of sils mariathe criterion collection