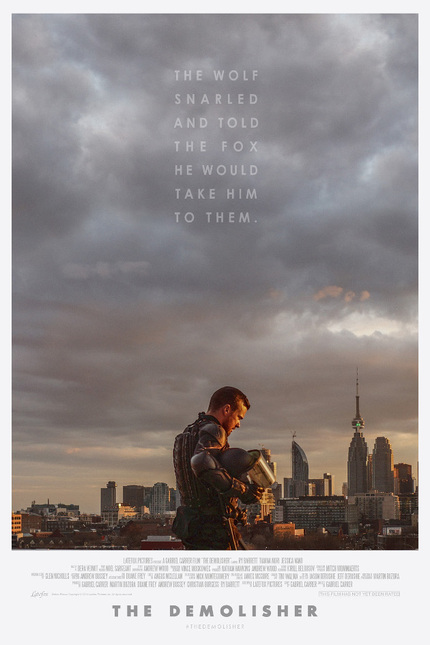 It was back in June that we first brought stills from Gabriel Carrer's vigilante action picture The Demolisher, much impressed by the look and feel of this Canadian indie. Well, I've had the chance to see some footage since then (Spoiler: It looks good) and while I'm not yet able to share that with you we have just been slipped the film's first teaser poster above. And, yep, like everything else we've seen so far it looks rather good.

Latefox Pictures has completed production on, The Demolisher. Directed by Gabriel Carrer (If a Tree Falls, In the House of Flies), The Demolisher chronicles the story of a man named Bruce (Ry Barrett), an ordinary repairman tormented by a crippling sense of responsibility for his disabled wife Samantha (Tianna Nori), a former policewoman and survivor of a gang-related assault. Bruce's increasing hyper-sensitivity to the injustice suffered by his wife steers him down a dark path of vigilantism.  His rapidly disintegrating mental health, paranoia and overwhelming sense of condemnation, Bruce channels his inner-rage, punishing young woman, Marie (Jessica Vano), and finding refuge in a world of intense violence.

More about The Demolisher