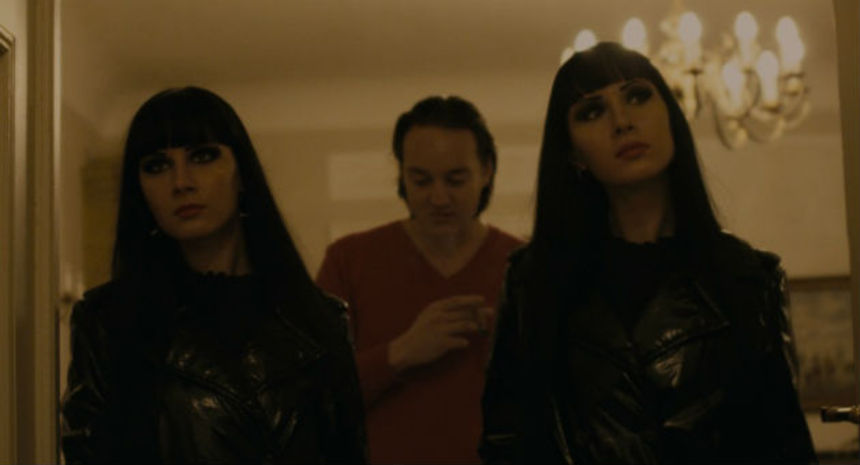 He's a rich old business executive who has just laid off one hundred workers.

He's troubled as he returns home to his beautiful, isolated mansion with his lovely young wife. He needs a good night's sleep before heading to Italy for a much-needed vacation. Of course he deserves for his home to be invaded by The Man in the Orange Jacket!

Beginning with an unsettling sequence that would serve nicely as the midway point in many a horror film, writer/director Aik Karapetian quickly moves on; he has other priorities in mind. His sophomore feature is not a horror movie, nor is it a character study, at least of the type that might be expected from a low-budget independent drama. Instead, it is largely an exploration of the effect that sudden, stolen wealth has upon a cracked psyche.

It becomes apparent that the titular character is not a well-balanced personality, suddenly thrown off the deep end into madness by the loss of his much-needed job. No, his actions point to someone who was already leaning over a cliff, waiting for an excuse to jump, and the loss of his job gives him the excuse he needs to assume the lifestyle he desires.

As far as social commentary is concerned, Karapetian sticks to stereotypes. The home invader quickly sheds his orange jacket and dresses in the fine garments of the nouveau riche. He chews with his mouth open. He drinks alcohol brutishly, slopping down huge gulps with each swig from a glass. He stares, slack-jawed, at an exercise show on television. He is incapable of communicating with anyone in a civilized manner. His fantasies reveal a sick and perverted imagination. 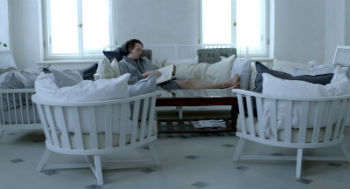 If he is intended to represent "the common man" in an allegory about the corrupting influence of wealth, well, then the picture comes across as flatly insulting to the common class, of which I consider myself a member! Obviously, the character is already corrupted in a manner that is atypical for his class, in that he is already inching toward brutal violence and amoral criminality.

What is it that made him this way? Was it his family? The oppressive physical labor of his job? Was he bullied in school? Did his workmates make fun of him? Did his bosses treat him with contempt? Is he frustrated by the political situation in his homeland? Has the violent temperament of the world as a whole soiled his purity?

Your guess is as good as mine. The Man in the Orange Jacket rigorously refuses to be tied down to anything as simple as a rational explanation for the actions that are taken. The film is a co-production from Latvia / Estonia, so my general ignorance of the region and its recent history may well prevent me from appreciating its finer points.

Considered solely as a movie, though, The Man in the Orange Jacket is an intriguingly disjointed drama, an ambitious effort that demands attention as it expresses an anguished, if incomprehensible, scream of pain and outrage.

The Man in the Orange Jacket

Do you feel this content is inappropriate or infringes upon your rights? Click here to report it, or see our DMCA policy.
Aik KarapetianEstoniaFantastic Fest 2014LatviaAnta AizupeMaxim LazarevAris RozentalsHorrorMysteryThriller