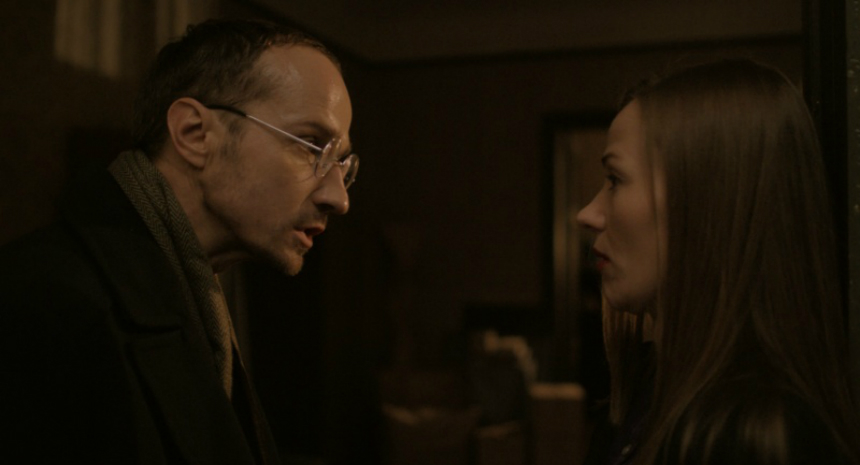 A mean, menacing undercurrent slithers through FirstBorn (Pirmdzimtais). It's not easily dismissed.

Writer/director Aik Karapetian's previous film, The Man in the Yellow Jacket, which screened at Fantastic Fest in 2014, showcased his ability to create an abrasive, unsettling atmosphere in which anything could happen. The film revolved around a stubborn cipher of a primary character and refused to be tied down to narrative logic. It was disjointed, ambitious, and anguished, leaving a deep impression on my psyche.

Taking a markedly different path, FirstBorn heads toward the same destination. Mostly it follows the travails of Francis (Kaspars Znotins) as he deals with the aftermath of a disturbing incident. From outward appearances, Francis is a middle-class intellectual, a calm and deliberate introvert whose actions are always carefully calculated. Katrina (Maija Doveika), his wife, is equally accomplished and intelligent, an extrovert whose warm behavioral inclinations nicely complement Francis' tendencies toward cool isolation.

Late one night, as they are walking home on well-lit yet lonely public streets from a small gathering, they are threatened and then assaulted by a passing motorcyclist. Unable to defend his wife as he thought possible, and stricken by jealousy when he realizes that Katrina has struck up a comfortable acquaintance with the police detective assigned to their case, Francis decides to track down the motorcyclist himself.

Violent trouble soon follows. Francis is strangely emboldened yet discomfited by all that is happening, and his emotional balance is further disrupted when Katrina reveals that she is pregnant. It's all a bit too much for Francis to take, and he begins to act out his frustrations upon the beleaguered Katrina, who will only stand for so much neglect and verbal abuse.

Beyond the constantly surprising narrative turns, what Karapetian's script has in abundance are characterizations that ring true. Francis and Katrina are the traditional "opposites attract," yet it's also clear that they have a relatively strong relationship that's already survived a few bumps in the road and overcome past differences.

In regard to Francis, I've seldom seen an introverted personality written, directed and performed with such conviction. Francis is very competent, with firm convictions and a definite surety in his manner of dealing with others. He knows what he's supposed to do, and mostly does that. When deviations on his chosen road appear without warning, his meticulously crafted personality begins to come apart at the seams.

Lacking the emotional capacity to reach out to others for help -- either because he's too hard on himself or perhaps because he's been too crushingly disappointed in the past by others -- he only makes it harder for himself to deal with the new tensions that arise because of his attempts to resolve the situation with the motorcyclist himself.

In other words, Francis is too often a stereotypical man, or at least what he imagines such a fantasy creature to be. He vainly attempts to imitate the flawed picture in his head of a man, what he himself thinks he should be, and fails utterly to meet his own rigid standards, leaving him open to outside influences.

As open as Katrina is to Francis, as long as they've been together, she starts to shut him out emotionally in response to his continued behavior. And once their romance begins to crack, there's no telling if or when repair is possible.

All this is suggested rather than told, which leaves FirstBorn open to an interpretation far different than my own. For myself, I found it to be a rather shattering drama, wrapped in the clothing of a very tense, slow-boiling thriller.

Do you feel this content is inappropriate or infringes upon your rights? Click here to report it, or see our DMCA policy.
Aik KarapetianFantastic Fest 2017Kaspars ZaleKaspars ZnotinsLatviaMaija DoveikaPirmdzimtais