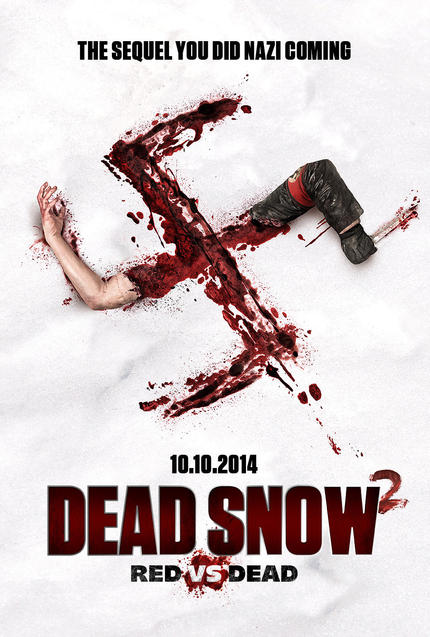 For those of you that want one sentence, consider this movie splattastic! Of course Dead Snow (2009) itself freaking rocked. It started with a hoary cliche. A group of horny young adults on a remote weekend retreat but it reintroduced one of the most under utilized movie monster concepts in the modern horror film. Nazi Zombies had been seen before in the atmospheric and deliciously cheesy Shock Waves (1977) and a couple of other more or less completely forgettable exploiters of that period.  though Shock Waves had created some iconic images, the Nazi zombie was less a part of the zombie narrative than it could have been. So when director Tommy Wirkola single handedly revived it cheers went up around horrordom. This was what fans had always imagined Nazi zombies would look and act like. A funny, action packed suspenseful gorefest.

Dead Snow 2: Red vs. Dead is even better.

The film picks up exactly where the first one left off. Martin (Vegar Hoel) is attempting to get away from Col. Herzog (Orjen Gamst)and his undead troops. A car crash leaves him in the hospital accused of having murdered his friends. Doctors have also made the mistake of swapping his arms with Herzog's giving him strange powers. As Herzog and the undead soldiers prepare to launch their final attack Martin joins forces with an American zombie killing squad (Martin Starr, Jocelyn DeBoer and Ingrid Haas) to defeat them.

The film jumps through an awful lot of weird narrative hoops to introduce all its characters and set them in motion. But other than a series of fairly tired recurring Star Wars jokes viewers are unlikely to care. This is funny funny stuff. Wirkola and his co-writers Stig Frode Henriksen (who appears in the film in the new role of a gay WW II museum curator) and Hoel, have created an endless array of physical sight gags and gaggingly violent over the top moments of mayhem that at times threatens to overwhelm anything in the way of plot or character development. Yet there is some character development here and a fairly strong story to boot. Be on the lookout for Kristoffer Joner who plays a zombified sidekick in the film. His bits left me howling.

I'm hesitant to describe too much of the story as I think this is definitely a case of the less you know the more you will enjoy. But that said it should be noted that Wirkola has done so much more than just cap off the original film with a solid coda. This is batshit crazy in spots and far bigger in scale. The fact that he manages to keep the film on the rails at all is a bit of a miracle.