Dare To Enter The HELLMOUTH With Exclusive Trailer! 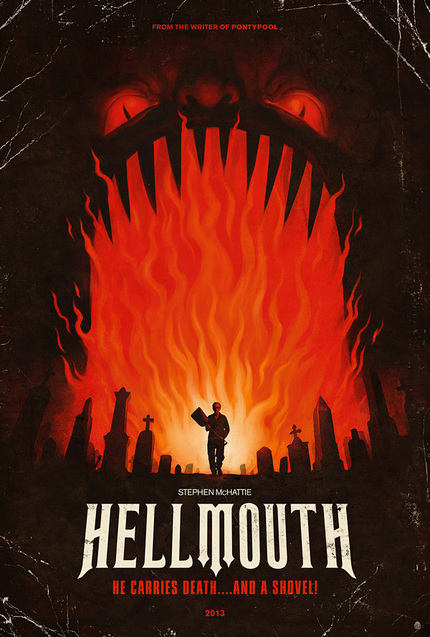 Take heart fans of the strange and unusual - particularly those of you with a weakness for the era of classic drive-in pulp - for Pontypool writer Tony Burgess and star Stephen McHattie have teamed up with director John Geddes to bring you exactly what the doctor ordered with the upcoming Hellmouth.

Hot off the heels of Septic Man and Ejecta, genre studio Foresight Features and Pontypool writer Tony Burgess have unleashed the trailer for their third collaboration, and the company's most ambitious film to date, the horror fantasy throwback HELLMOUTH.  A visual mindwarp in the vein of F.W. Murnau meets Tim Burton, HELLMOUTH is director John Geddes' (Exit Humanity) love letter to an era of forgotten cinema.

Veteran actor in over 200 films, Hoser horror hero Stephen McHattie (300) is back, taking on two bigs roles within the film, including the leading role as a dying gravekeeper who must pass through Hell to save the soul of a beautiful woman, (Siobhan Giles Murphy). Full of gothic graveyards and monster mayhem, HELLMOUTH is based on an original screenplay by award-winning punk bard Tony Burgess.  The film co-stars Julian Richings (Supernatural), Bruce McDonald (Hardcore Logo), Boyd Banks (Dawn of the Dead), and Ari Millen (Orphan Black).

While the completed Hellmouth will be unveiled to distributors around the world at a buyers-only screening during the Toronto International Film Festival [full disclosure: XYZ Films, where I am a partner, represent the film for North American sales] ScreenAnarchy is proud to unveil the first trailer for the film so that the general public can get a taste as well. Take a look below and keep an eye open for the public premiere soon.