Review: SIN CITY 2: A DAME TO KILL FOR, Where Broken Dreams Go To Die 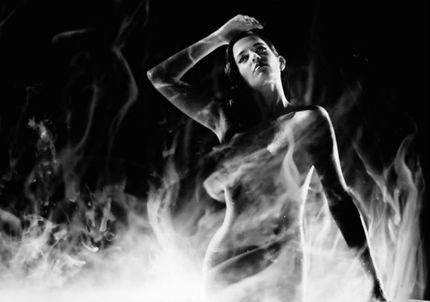 Sin City: A Dame To Kill For, like its sibling film 300: Rise of an Empire, is a sequel few were clamoring for.

The first film from 2005 set the tone for these Frank Miller adaptations, strongly graphical with a melange of animation and live action that has characterized the films from both series. While the first Sin City was brash enough to premiere in official competition at Cannes, this second outing holds fewer airs. It's in many ways grittier and more tawdry, and in many ways it's the better film for it.

Story-wise, we get a similar episodic structure, a bunk of lunkhead guys moping around with death wishes while a bunch of fast talking women steal their hearts.

Mickey Rourke's return as the square jawed Marv plunges us directly into the film's new aesthetic, waking up bleary eyed with little memory of what had come before. Having not seen the previous film since its theatrical run, I knew how he felt. He's but one of a slew of characters making their reappearance (some even from beyond the grave), picking up on story beats while introducing a few other tangents to explore.

I'll credit Robert Rodriguez with this aspect of the direction, as it's clear that someone with a keen eye for stereoscopic cinematography was in charge of making the visuals pop. The same mix of sharp graphic lines and Dutch angularity makes for an even more engrossing take on Basin City.

While visually there's a bit of a jump, thanks to improved techniques and decent projection, there's still not much in the way of story to set the film apart. We still get a bunch of film noir jargon thrown about in an attempt to set mood, and often the gravelly narration and somber staging feel like more of the same.

If there's one exceptional aspect to this film, one that further ties things to the world of Frank Miller sequels from 2014, it's the inclusion of Eva Green. She portrays the Dame of the title with a brash fearlessness that's at times intoxicating, perfectly embodying the tone of the picture while never feeling like she's doing someone a favour to be showing up. Her character has the greatest range of emotions, and she shines when both exploiting and being exploited.

It's no small matter that Green is naked for much of the film, and I'm puerile enough to point out that, aesthetically, this is not such a chore to experience. Yet I found myself thinking, as yet another nudie shot with Green came on screen, that there's something quite liberating about her openness, the way she uses her sexuality and guile to wrap both the characters and audiences around her fingers. 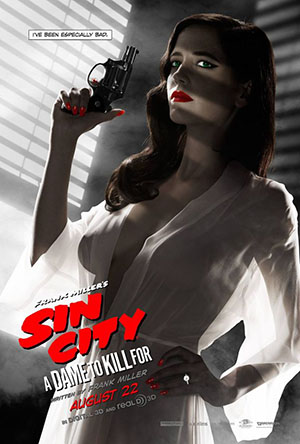 The opposite, I'd argue, is Jessica Alba. With a useless return as Nancy Calahan, she writhes upon the stage for the pleasure of a crowd of hooting men, incapable of gaining the revenge for her lost cop sweetheart. Her PG-level grinding is more akin to some sort of weak breakdancing, and her mopey look and flaccid response makes her seem out of place, almost like furniture. It's harsh, perhaps, but despite being clothed I felt her exploitation more acutely, as if you could read the non-nudity clauses in her contract with every strap of her bodice, each gyration perfectly calculated to conform to what she and her agents had agreed to in a series of meetings.

This diversion into the sexual politics of contemporary exploitation cinema may well be me looking for moral gray in a film that's overtly black and white, but you have time to let your mind wander during the meandering plot and stilted conversations.

It remains acute that the film is meant to be grungy, a throwback to when you slapped your woman when she pissed you off, and you shot at your enemies when they beat you at poker. The film is purposely anachronistic and boorish, and many will go farther, thinking it misogynistic or fascist. I'm not going to argue against those charges, merely to say that if you're going to play the "it's all for fun" card, I'm going to root for the actor who seems perfectly comfortable in abiding by the rules of the game, and giving it her all. For Green, then, I applaud this little, grungy diversion.

I'll also give plaudits to Powers Boothe and Stacey Keach, two guys who along with Rourke give the film its appropriately gravelly sonority. Josh Brolin almost lives up to his part, and Joseph Gordon-Levitt also tries his best, but in the end those guys aren't quite able to amp things up the way they need to in order to make it work. Loads of others show up as well, including Christopher Lloyd and Ray Liotta, an underused Rosario Dawson, and an overused Christopher Meloni and Jeremy Piven.

In the end, I think I enjoyed this one more than the last, but that's coloured by hazy recollections of a film I didn't particularly respond to almost a decade ago. As another exercise in seeing Eva Green bring her A-game, whatever the nature of the role, it's a film to take a chance on - she practically rewrites the title to be A Dame To See Sin City 2 For. Otherwise, this time 'round Sin City remains a place of broken dreams and lost opportunities, an exploitation movie that doesn't fully exploit its opportunities, with a story that goes nowhere and most characters drawn as starkly as the palate of the film.

Sin City: A Dame to Kill For

More about Sin City: A Dame To Kill For