Review: 300: RISE OF AN EMPIRE Is A Servicable Sequel 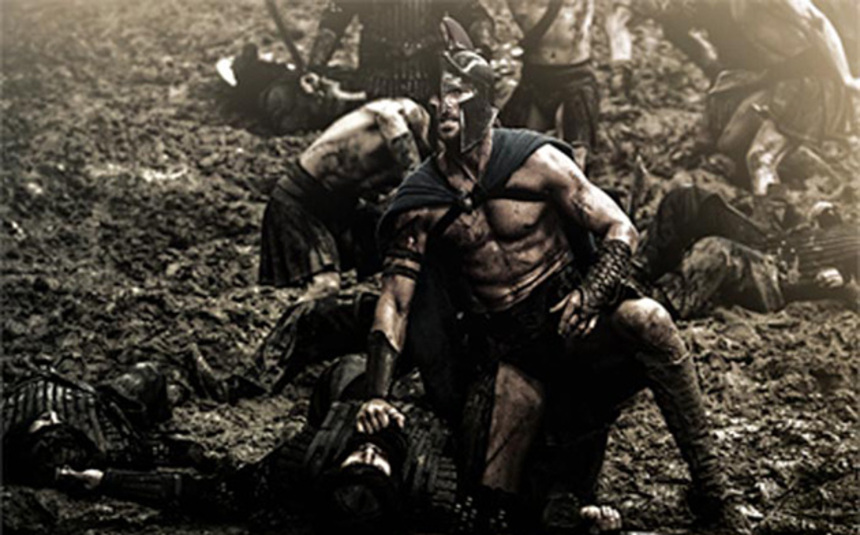 It seems apt for a film of this nature to provide a bit of historical context. Back in 2006 a young man who had previously helmed the surprisingly not shitty redux of Dawn of the Dead was tasked with bringing famed graphic novelists Lyn Varley and Frank Miller's 1998 tale of the Battle of Thermopylae. Coming on the heels of 2005's Sin City, 300 was another explicit attempt to make the stark lines and overt contrast of the graphic novel come to live on cinema screens. Through extensive CGI, hyper slow motion that would result in heroic "poses", the original 300 played like the drawing on a Grecian urn had come to life, with all participants clearly having done their crunches before their images were captured for posterity.

As both an aesthetic and technical experiment Snyder's film was interesting. The kind of manic look of the thing perfectly suited the heightened mythology, and the cohesive narrative made for a fairly simple tale of sacrifice and heroism. Butler barked, swords were swung, and it all kind of worked out OK both cinematically and at the box office.

Cut to 2014, and we've seen Snyder move on, both as director of other famed comic book franchises (Watchman, Superman and soon to be Batman). Yet he still very much is playing a role in Rise of an Empire, serving as producer, co-writer and clear inspiration to the film's hired hand, Israeli director Noam Murro.

The film centers on two time periods - the leadup to the events of the original 300, with the death of Xerxes' father at the hand of Themistocles, and the naval battle of Artemesium that historically did take place in synchronicity with the slaughter on the coast of Thermopylae.

Structurally, the myth making tries to stretch the relatively compact story of the first film in these two directions, focusing backwards to provide context (a kind of "origin story" for the God King Xerxes), along with the greater contextualization of the events of the first film. Both Lena Headey and Rodrogo Santoro reprise their roles as Queen Gorgo of the Spartans and Xerxes of the Persians respectively, yet the film mostly surrounds the battle betwen Sullivan Stapleton's Themistokles and Eva Green's Artemisia.

Frankly, this is where the film gets a bit weird - the addition of a strong, brutal female military leader does make it a little bit less of a boys club, but not by much. We've got plenty of both physical and sexual politics going on, and even moments of seduction are done with the kind of stylized slow-motion violence characterized by the original film, male and female breasts angrily swinging about in palpable three dimensions.

The battles themselves (and their are plenty) are a raw mix of digital blood and crunching boat fragments, a veritable onslaught at times that sometimes slips into the exhausting. Without the relatively tight focus of the other film  Rise of an Empire feels more forced, more haphazard in its execution. As we bounce from place to place, time to time, it's hard to feel that any one slaughter is more important than the next. When the central battle plan is one of attrition, one just kinds of sits back and waits for the wave of attacks to cease so that another, similar storyline should begin.

Rise is a relatively redundant sequel, but it's an innocuous one. It's certainly crafted on a level commensurate with the original, and for superfans of Snyder and Miller's aesthetic it may even please.

I was with the film for much of it, save for it stepping on what I consider a personal landmine. As one warrior leans in to hear from one of his dying men, we see whispering lips tell of something. As viewers, we sit back, while the son of this dying man asks explicitly what was said. "I'll tell you later", the warrior says, creating the kind of cheap, wholly unnecessary "suspense" that makes local news stations ask "Is your water system poisoning you? News at 11." Worse, when only a few minutes later we hear what was said, it's so banal, so off the cuff, and so clearly not the entirely of what was passed along that it becomes even more annoying.

Save for a few truly egregious moments like this, the 300 sequel is basically a perfectly serviceable hyperkinetic action film very much in line with its original. It doesn't shy away from either violence or complexity of narrative structure, and it does a pretty decent job in moving the ball along after the first film. That said, it just may in someways do something no sequel should ever do: retroactively make the first film less significant. As a one-off, the first 300 told the tale in a way that left it up to the imagination of the viewer (and, well, the prose of the historians) to make the glory of their sacrifice rise for subsequent events. This tale of the coming together of the rest of the city states makes the events of Thermopylae seem somewhat futile, a mere showthing by a bunch of blindly heroic Spartans more interested in their martyrdom for a greater cause than actual military significance.

It's this subtle diminishment that might actually do more harm than good, but, of course, I may be overthinking it. This isn't a film for purists, nor is it a film for those who delve into Herodotus in their spare time. This is a comic book movie using Greek wars as a backdrop to tell archetypical tales. In this way this 300 sequel favourably compares to its sibling film. It does not surpass Snyder's original, but nor does it make a complete mess out of things. It may be an unnecessary sequel, but it's a decent enough one for fans of the original, and if you're going to see it at all, I'd advise seeing it on the biggest screen possible in 3D to at least get out of it the most of what it has to offer.