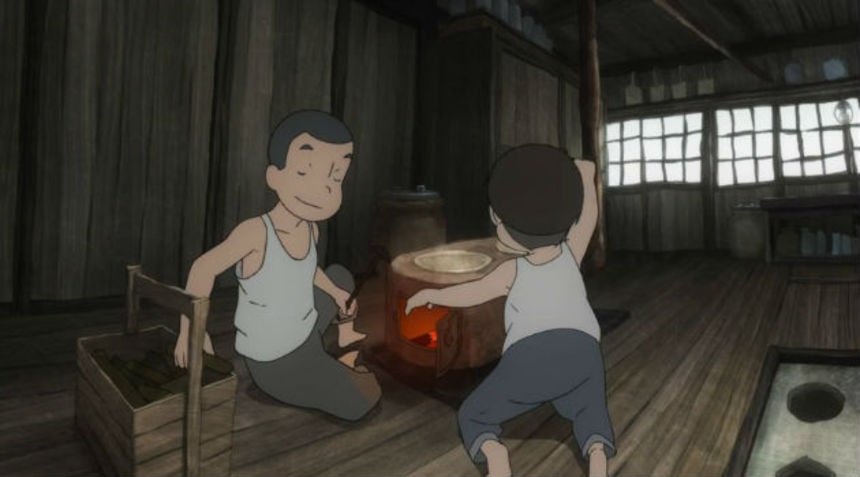 Director Nishikubo Mizuho's ode to post-war survival, Giovanni's Island (Jobanni no shima), offers a heartbreaking account of the struggles of two brothers, as the world they grew up in changes around them, amidst the aftermath of the Second World War.

Junpei and his younger brother Kanta live on the island of Shikotan in Northern Japan. Raised by their stoic, serious father and elderly, fisherman grandfather, they find nightly escape from the daily drama of rummaging for food and the threat of bombs through reading 'Night on the Galactic Railroad', a fantasy novel featuring a train that shuttles through the stars, and from whose main characters, Giovanni and Campanelli, the boys received their names.
When the war ends, everything changes as the Russians arrive to take control, marking their landing by storming into the boys' school. Huge and terrifying in the children's eyes, they bark incomprehensible orders at the frightened youngsters. As the soldiers and their families occupy the school and homes of the island, the inhabitants must learn to deal with the newcomers while sheltering an uncle and father who are finding their own dangerous ways to look after the people they care for. These children are forced to figure out life in in a place full of new and deadly fears.

The film excels at painting the blurred lines between friend and foe, not seeking to judge the people who could be perceived as the clear-cut enemy. The Russians are portrayed as both frightening and sympathetic, and there is fear and prejudice on both sides, quite natural in the aftermath of war. Throughout the film, apparent enemies offer help or prove not to be the monsters they appear, while weakness exists on both sides of the line.
The boys' uncle, a charming rogue who brags of his invincibility, puts Junpei's life in danger to aid in his smuggling operations, and while he clearly cares for his family, his loyalty cannot be relied upon, quite the opposite of the rigidly moral and selfless father. The differences between people and cultures is broken down as the children learn to coexist in school.
A tentative relationship forms between Junpei and Tanya, the pretty blonde girl who has occupied their old house, spurred on by little Kanta, who begins to dream of a life amongst the happy, dancing Russian family, before their lives are uprooted again. When the Japanese are deported from their island home to Russian camps, it leads the way to the final stages of the film where the boys set out on a quest through the snow covered Siberian wilderness, dogged by military police, on a quest to find their father in what inevitably leads to a heartbreaking finale.

The film's animation appears somewhat crude at times, which actually helps give it a dated atmosphere, as certain scenes carry the impression of wartime drawings made in a prison camp. At times, Giovanni's Island actually brought to mind the classic anime Crayon Shinchan, especially with the exaggerated facial contortions, when a character is burping for example, used for comedy purposes. While these comedic distortions are mildly distracting, the animation is otherwise very effective in expressing the people, time and environment.
The screen is awash with Dutch angles, elongated characters, and fisheye-lens views, perfectly encapsulating the children's distorted view of the world from their position below the eye line of those making decisions. Within this distorted world of hulking army men and bleak, open landscapes, moments of childlike magic can still be found. When a track is built for a little electric toy train to hurtle around, a tiny light illuminating its way in the dark, it's a moment of magic and escapism on the Galactic Railroad for Jumpei and Kanta. The shift away from the sun-drenched island into the bleak greys and whites in the snow-set surroundings of the later scenes mark the onset of the emotional ending and the loss that is to come.

It's impossible not to mention Studio Ghibli's Isao Takahata masterpiece Graveyard of the Fireflies when discussing Giovanni's Island. The two films overlap in several key areas of theme and narrative, though this later work is strong enough to stand on its own, and really deserves a spot outside of its older brother's shadow.
Both films illustrate the civilian side of war as seen through the eyes of innocent children and feature an older brother, carrying a greater level of awareness of the cruelties of life, looking out for a younger, more naive sibling and trying to survive amongst the turmoil of a war ravaged world. Whereas Graveyard of the Fireflies is undeniably bleak, Giovanni's Island offers a much greater sense of hope, both in its events and through the sympathies of the characters within the story.
Coming from animation house Production I.G., a company that made their name with the Ghost in the Shell series, but seems to be moving into broader, family friendly territory with last year's A Letter To Momo and now this, Giovanni's Island is a solid addition to the line of Japanese war films that explore the human toll of conflict. Little Junpei and Kanta and the rest of the cast of well-drawn characters offer rare insight into a fascinating and little-documented period of the war, in this affecting and deeply moving film.
Tweet Post Submit