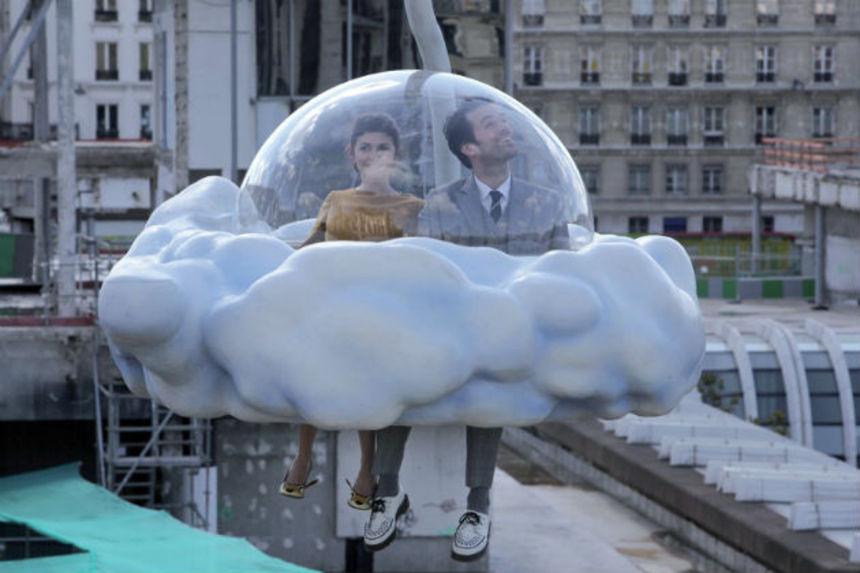 Michel Gondry is back. And he's going no holds barred.

After slumming it as studio hired-gun and inner-city auteur (in 2011's The Green Hornet and 2012's The We and the I, respectively), the French director is back in small-batch surrealist mode with Mood Indigo (L'ecume des jours). The cult of Gondry can breathe a sigh of relief: with all its artisanal whimsy and handcrafted pizazz, this isn't just the movie you've been waiting for -- it's three of them. Now, if only Gondry had managed to make them add up to anything meaningful or affecting.

I could offer some token plot summary here, but believe me when I say that it really, really doesn't matter. Adapting the 1947 Boris Vian novel L'ecume des jours, a linguistically playful romance that's about as universally beloved as you can get in that country of contrarians (think Love Story by way of Lewis Carroll), and stocked with a murderer's row of French box-office heavyweights, an air of can't-miss confidence seems to have given Gondry (or Gondry's cheque-signing producers) carte blanche to let his imagination run wild.

And run wild it does, resulting in a film positively bursting with the director's trademark wit and ingenuity. Paper maché eels dip in and out of household piping, giant puppets fall victim to ice-skate decapitations, aspect ratios change according to emotional states. Touches of stop motion, rear projection and hand-drawn animation embroider every frame. As we've all come to expect with Gondry, his use of analogue effects is masterful.

But to say that getting deep into plot summary is not particularly useful does not mean we're dealing with some next level, Inland Empire shit. There's a perfectly conventional tale of love and loss between stars Audrey Tautou and Romain Duris, and comic relief heavy hitters Omar Sy and Gad Elmaleh do what they're asked as the two foils. But none are ever asked to do more than fill space with familiar faces and marquee value while Gondry works his special magic. Unfortunately, beyond showcasing its director's singular visual talent, Mood Indigo just does not work.

It's really too bad, because if anybody has proven they can make a killer romantic fantasia, it's Gondry. For whatever reason -- lack of an equally well-realized screenplay? A generous budget and limited creative pushback? All of the above? (Ding ding ding!) -- the emotional and narrative hooks needed to make the tragic romance never land. We never really develop any involvement at all. Often, the film seems to actively work against it. 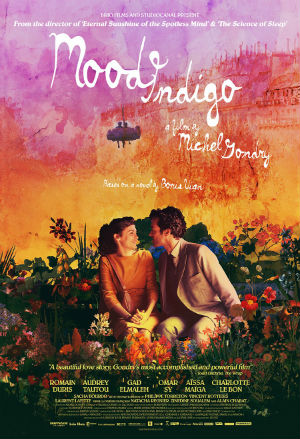 A three-minute rear projection go-kart race from the church steps to the altar in the middle of the main characters' marriage is one baffling example, though as a stand-alone sequence, I guess it's well and good. There's also a great gag with a life sized Jean-Paul Sartre doll. It would make a perfectly decent Arctic Monkeys video, but it comes out of nowhere, stopping dead in its tracks (what should be) a fairly important scene. There's nothing at all wrong with mischievous digression, but when it's so relentless, what the hell are we even digressing from? Aren't we at some point supposed to start to care?

That's not a rhetorical question. We are clearly expected to during the grim downshift of the last third. The screen drains of color and the tone grows somber to reflect the full toll of tragedy. By that point it's all too little, too late. The first ninety minutes of weightlessness make the gravitas of the film's last half hour feel just as affected, another bit of dress-up. What should be deeply moving instead drags on and on.

I know it sounds like I'm being too harsh, and in all honesty, I don't mean to be. That same last third has some of the most interesting, and haunting, imagery of the film. The film's best set pieces come in this more jagged, darkly comic section. But they remain just that: set pieces, unconnected and fairly un-moored from everything else.

Gondry's unique vision is undeniable. As a platform to see it splashed out on the big screen, Mood Indigo is definitely worth your time. But I think the film will eventually settle into its natural place on Gondryphiles' DVD racks, comfortably next to his Director's Label compilation as a useful archive of his various approaches and techniques. Fans can get in, get inspired and get out. But for most, two hours spent in Gondryland can feel awfully long.

Review originally published during the film's theatrical release in France in June 2013. Please note that a different, director's preferred version of Mood Indigo, some 30 minutes shorter, is being released in select U.S. theaters by Drafthouse Films on Friday, July 17. Visit the official site for more information.

Do you feel this content is inappropriate or infringes upon your rights? Click here to report it, or see our DMCA policy.
Audrey TautouDrafthouse FilmsMichel GondryRomain Duris