Peter Martin
Managing Editor; Dallas, Texas (@peteramartin)
Tweet Post Submit
The third annual Oak Cliff Film Festival, a celebration of all things independent, starts tonight, June 19, and runs through June 22. The opening night presentation is To Be Takei, a documentary about actor / activist George Takei, directed by Jennifer M. Kroot and Bill Weber.
Held in the North Oak Cliff neighborhood in Dallas, Texas, the festival will take place at the historic Texas Theatre, the Kessler Theater, the Bishop Arts Theater, and other nearby venues. It's a long-established neighborhood that's been revitalized in recent years by a growing arts community, and the festival reflects that combination of the old and the new, with a keen awareness of its important place in the local scene and a desire to connect with the world at large.
This year's festival pays tribute to pioneering photographer Eadweard Muybridge and features an impressively-curated selection of narrative films, documentaries, and repertory screenings. We've picked our favorites below, either those we've already seen or those that look the most promising; click through the gallery to see them all. And more information is available at the official festival site. 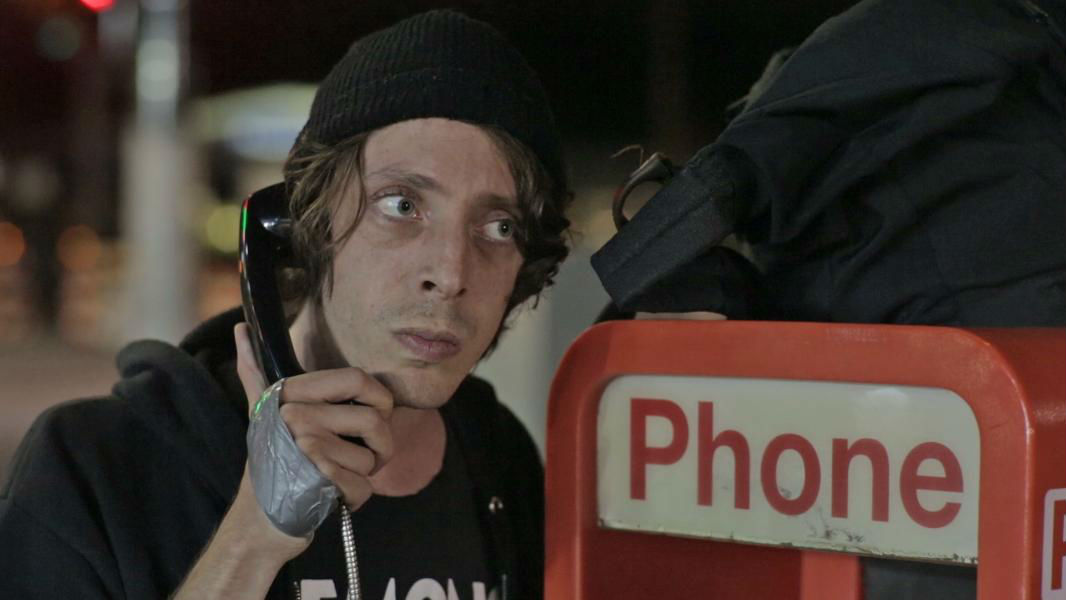 Marty Jackitansky (Joshua Burge) think's he's beating the system. But the system has a funny way of beating square pegs like Marty back into round holes.

Buzzard is, itself, a square peg, declining to be pigeonholed as anything other than the story of Marty, a young man who is a temp worker in the back offices of a bank. At first, he steals from his employer by ordering office supplies online and then returning them in person for cash. Next, he steals a large number of checks intended for customers and cashs them against his bank account. When he thinks his scam will be uncovered, he hides out in the basement of co-worker Derek (Potrykus).

Marty's petty crimes add up quickly, and his behavior becomes more erratic. During brief phone calls with his mother, hints are dropped about Marty's past, suggesting that the potential for something more troubling may be brewing within his psychology.

The film is visually arresting because it lacks any artifice; it's like a home movie made with precision and care. Despite the plentitude of comic books and horror movie posters in his apartment, Marty is not a lovable loser; he's entirely consumed with his own existence and displays no fellow-feeling whatsoever. He's an immature child in an adult's body, which makes him an unknown commodity when he's faced with a crisis.

As writer and director, Potrykus sets up a fascinating situation revolving around an opaque character that refuses easy resolution in memorable fashion. As editor, however, Potrykus tests the patience; there's such a thing as deliberate pacing to deepen an impression, which is occasionally in evidence, and then there are scenes such as one late in the film, watching Marty eat an entire bowl of spaghetti in bed, chewing with his mouth open. The scene does not illuminate; it merely irritates to no apparent purpose. 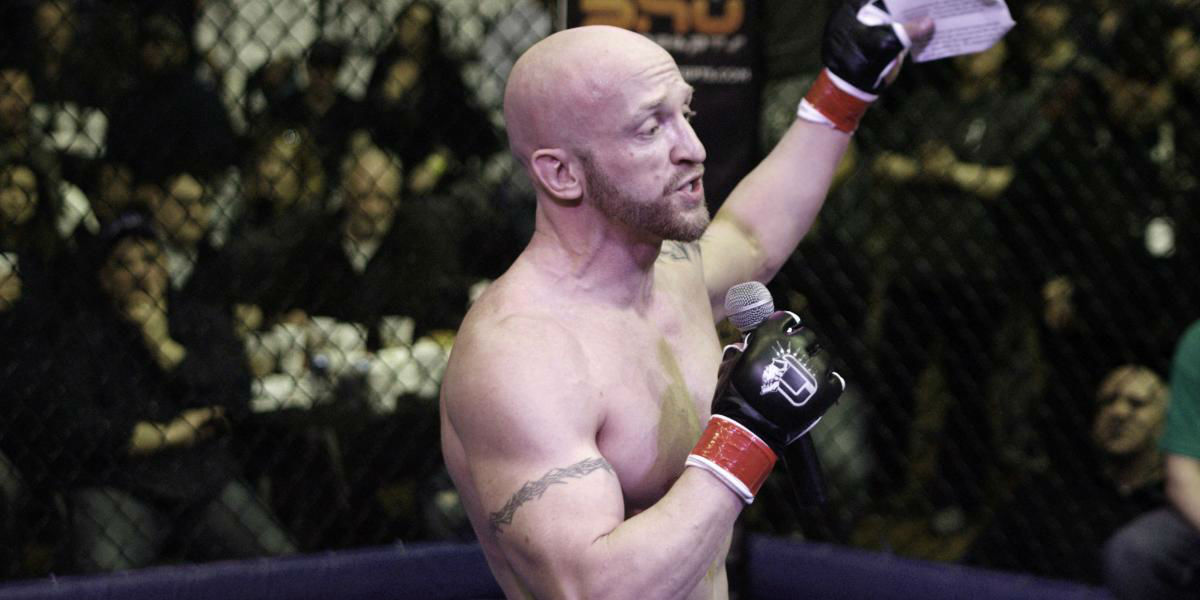 Do you love Mixed Martial Arts (MMA) fighting? Do you also love God, and believe that He approves of MMA fighting?

Calmly and gently stacking the deck, this documentary directed by Bryan Storkel and Daniel Junge and produced by Eben Kostbar follows multiple pastors who are also current or past MMA fighters. Each of the men is shown to be kind, loving, and spiritual before they go into a cage and endeavor to beat the living daylights out of an opponent. (Or cheer on a fighter they've trained.) Before and after a match, they pray to God that no permanent damage be inflicted, and they are always ready to give credit for a victory to God.

The men are pastors at modern ministries in different parts of the country. Their beliefs and activities, including training fighters, are contrasted with the stern traditional beliefs espoused by Father Duffell, a Roman Catholic priest in New York City, who is dismayed that anyone would think that God approves of MMA fighting.

After apparently placing all their cards on the table, however, directors Storkel and Junge pull out another deck and begins shuffling. More words of dissent are heard from the priest and from New York assemblyman Bob Reilly, speaking against the legalization of professional MMA fighting in the only state where it's still against the law.

And other notes of caution are expressed. One pastor scoffs, 'Oh, we don't have very many injuries,' while in a separate interview his wife says that her husband has already suffered 10 concussions. In Houston, Texas, a former MMA fighter has become conflicted; now working as a martial arts instructor after years away from the cage, it has become more difficult for him to reconcile his religious beliefs with MMA fighting and training. The more extreme side of another pastor/fighter is revealed; he brings a gun to his church and is teaching his young sons to shoot. He also speaks fondly about the Crusades and says that he has modeled his church on what he views as their "liberating" views. Asked how he would respond if someone 'got in his face and disrespected him' verbally, the pastor says plainly that he will 'put them in their place.'

Ultimately, Fight Church allows the viewer to draw their own conclusions, presenting as much evidence as possible about the intersection of Western religions and MMA fighting. 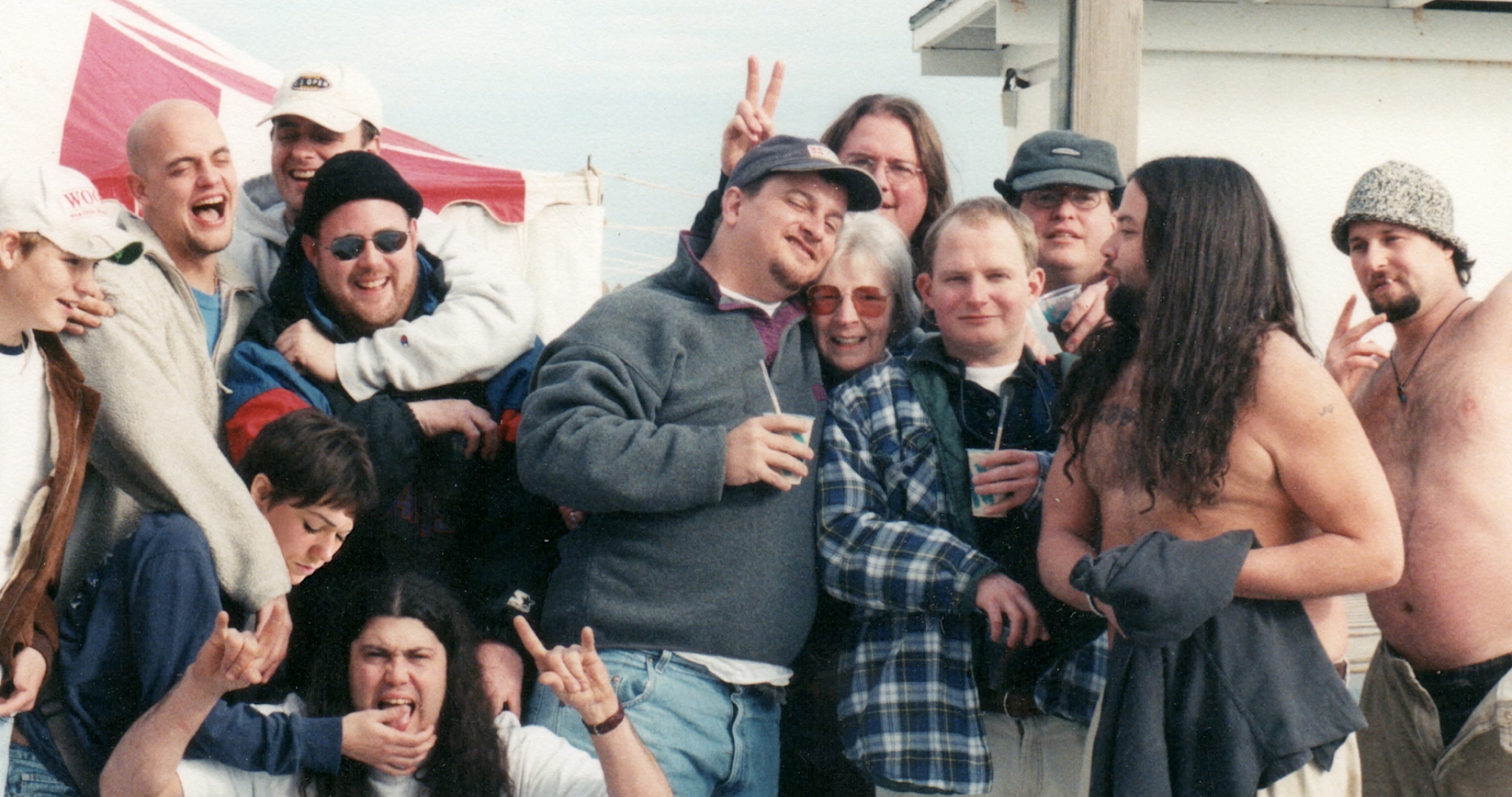 An outlandishly rowdy group of friends from Mobile, Alabama, decide on New Year's Eve that they want to head to the (Gulf of Mexico) coast so they can participate in the annual Polar Bear Dip the following morning, an event featuring a quick dip in very chilly waters.

Since considerable inebriation is already involved, a limousine is hired for the round trip, a journey that will involve nakedness, random hook-ups, a news crew, much bar drinking, bar fighting, limo fighting, picking fights, possible racial epithets hurled towards the African-American driver (and his cousin), driver/passenger fighting, abandoned passengers, irritation that cocaine is not being shared, breaking and entering, a frozen night clad only in pajama nights...

Like most drunken adventures, the recounting of such stories is (almost) always of more interest to the participants than the listeners -- unless the listeners are also drunk at the time. That's true here; the adventure quickly becomes an endless cycle of drinking and fighting and arguing and generally regrettable behavior.

What's of greater interest is the method of storytelling. Audio interviews with the participants provide the voice-over as the events are recreated with actors. This provides an element of novelty for documentary-style filmmaking, and the directors add a further layer of objective perspective through these recreations. 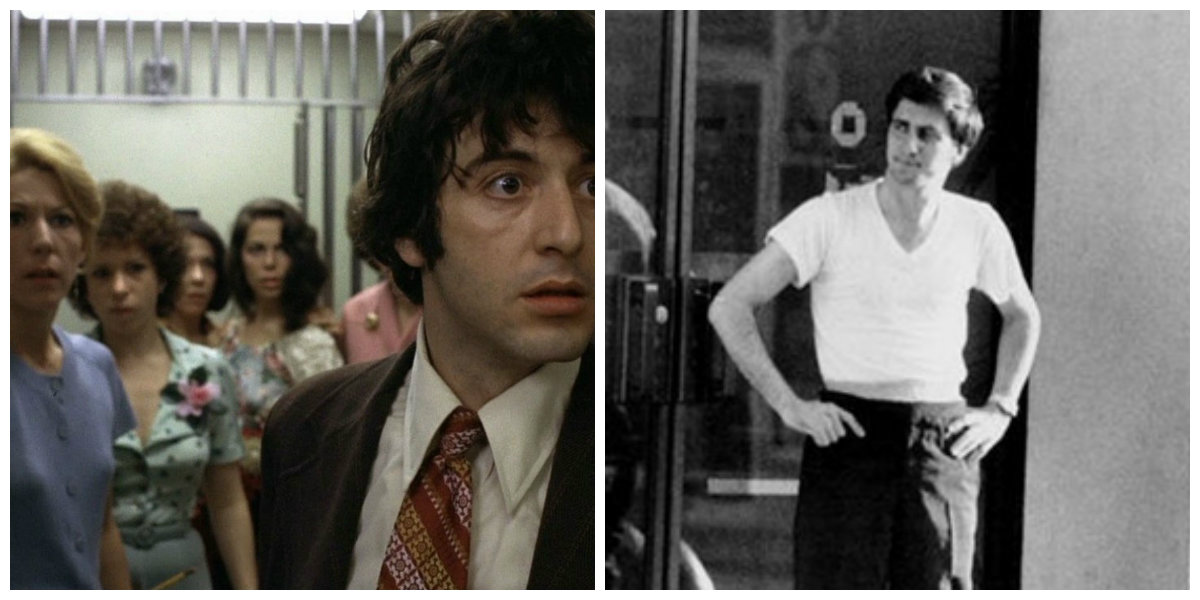 It's already feeling like the dogs days of summer in Dallas, which makes it a perfect time to escape into the cool embrace of the historic Texas Theatre for two evocative movies on Friday evening.

The Dog
Directed by Allison Berg and Francois Keraudren

It's not a rep title, but The Dog is nonetheless an apt companion piece to Dog Day Afternoon; it's a documentary on John Wojtowicz, the real-life inspiration for Al Pacino's character. In his review, Twitch's Jason Gorber described it as "a highly entertaining if slightly indulgent look" at Wojtowicz.

Drafthouse Films has picked up the film for distribution and will release it a bit later this year. 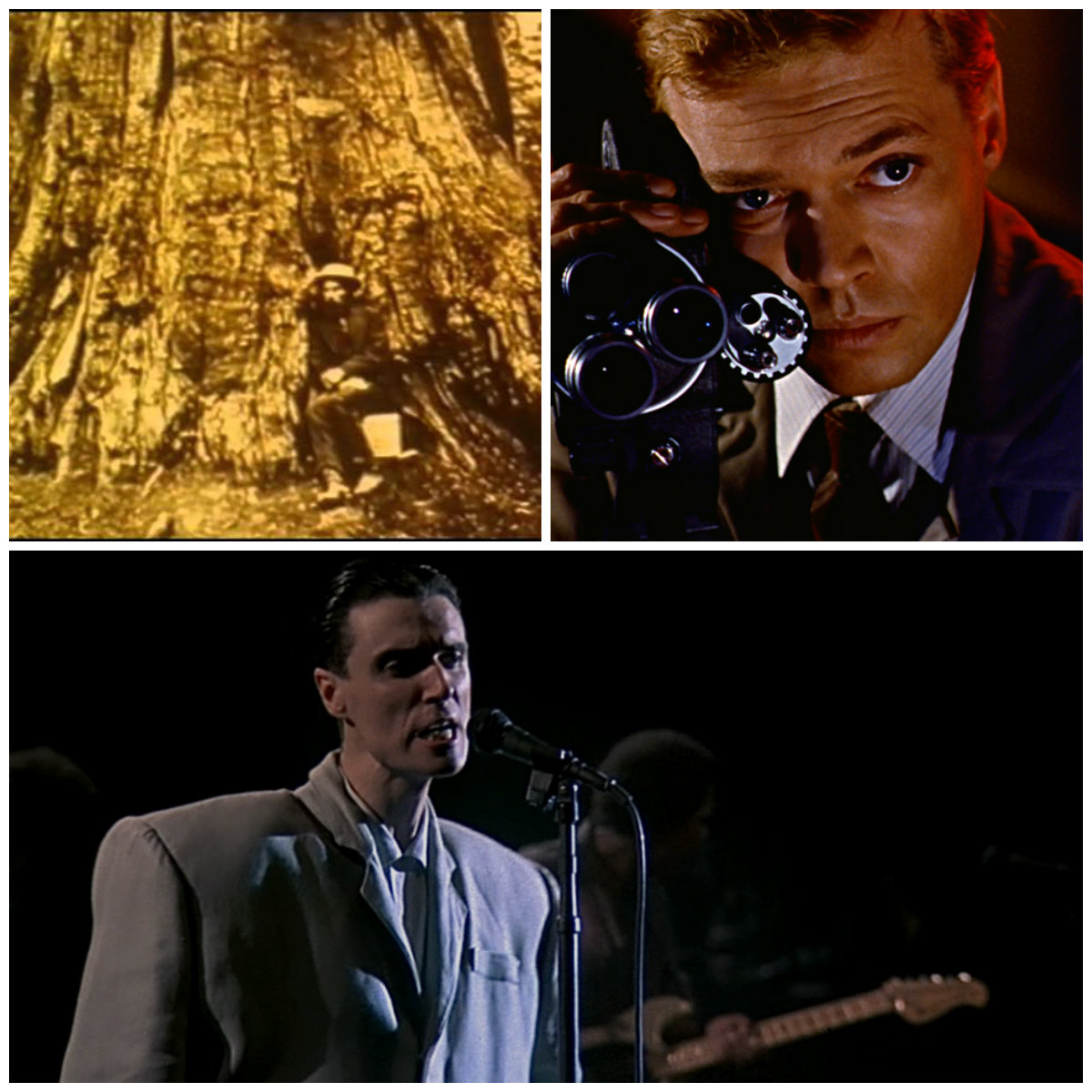 The Texas Theatre is outfitted with modern digital projection equipment, but it also has a 35mm projector and regularly screens repertory titles. For this year's festival, several outstanding selections will be featured.

The English photographer is known for his pioneering studies of motion and for his early work in motion-picture projection. Cal Arts professor Thom Andersen spent 10 years animating those photographic studies. His debut documentary, narrated by Dean Stockwell, mixes the creative with the biographical to paint a portrait of a man and the early history of motion pictures.

A true horror movie. Though it doesn't rely on cheap sensationalism to make its points, Powell's use of color is sensational, in an edging, unnerving fashion. There will be stomach-clenching.

Talking Heads had already been experimenting with the live concert format, and the tour captured in Jonathan Demme's 1984 documentary reflects the state of their music-making at the time. Their music provided Demme with inspiration to give a different spin to the stereotypical "concert movie." 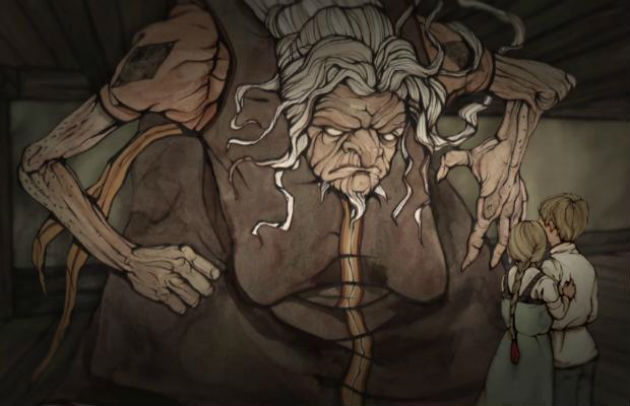 The Vanquishing of the Witch Baba Yaga
Directed by Jessica Oreck

The festival's official description: "A descent into Eastern Europe's haunted woodlands uncovers the secrets, fairy tales, and bloody histories that shape our understanding of man's place in nature."

Twitch's Dustin Chang wrote in part: "Jessica Oreck's ravishing new film is not a mere anthropological documentary on Eastern Europe. ... The film hypnotizes you for 72 short minutes that seem eternal -- in a good, waking-dream way." 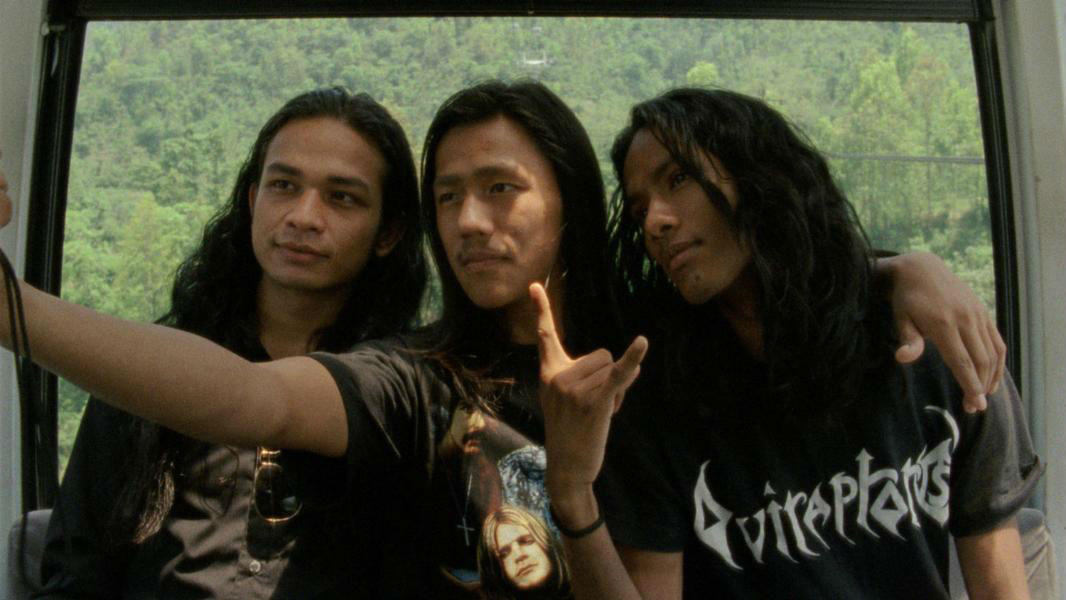 High above a jungle in Nepal, pilgrims make an ancient journey by cable car to worship Manakamana.

In his review from Toronto, Twitch's Kurt Halfyard concluded that it's "a unique and fulfilling cinematic experience -- and one of the best of the year." 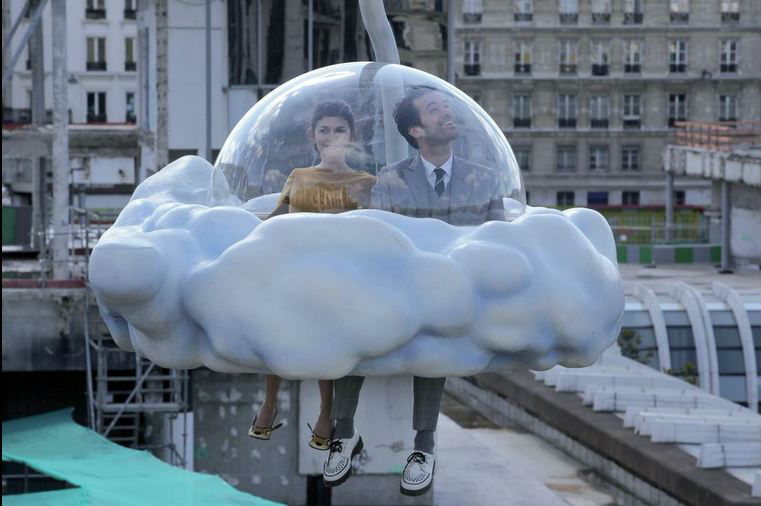 In his review during the film's theatrical release in France last year, our own Ben Croll noted: "Gondry's unique vision is undeniable. As a platform to see it splashed out on the big screen, Mood Indigo is definitely worth your time."

This is another title that Drafthouse Films has picked up and will be distributing in theaters and via VOD later this year. 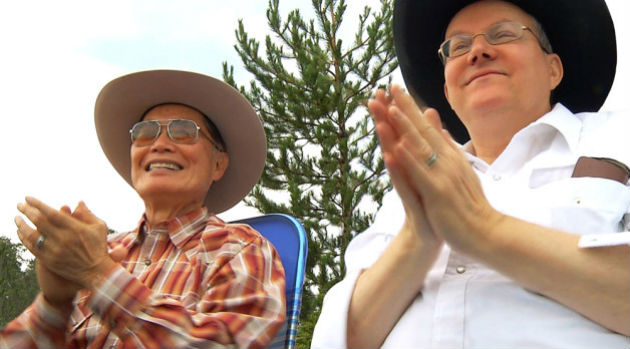 The opening night presentation, a documentary about George Takei.