Drafthouse Picks Up Michel Gondry's MOOD INDIGO For US Distribution 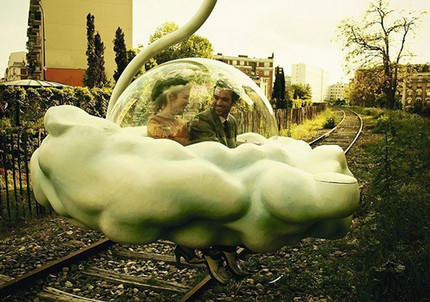 Heads up, Michel Gondry fans! Drafthouse Films are about to make your day:

Already receiving high praise from its World Premiere at the Karovly Vary Film Festival, Mood Indigo was equally well received with its US debut at Fantastic Fest in September with a shorter cut Gondry created for international audiences.

"Mood Indigo is propelled by sharp, witty dialogue complimented by Gondry's continually stupendous sense of visual capture." according to Bill Graham of thefilmstage.com and Todd Ghilchrist of The Wrap says the film "perfectly balances Gondry's ornamental creativity and the verité storytelling of his more recent work, combining refined style and raw emotion into one devastating, beautiful package. It's also (Gondry's) most accomplished and powerful film in almost a decade."

"Reading Boris Vian accompanied my adolescence and participated to the development of my creativity," says director Michel Gondry, "I was honored to be asked to direct an adaptation of his most famous work. I put all of me into it."

"Not since Amelie have we seen Audrey Tautou so undeniably whimsical and charming," says Drafthouse Films founder Tim League. "and her storybook romance with co-star Romain Duris is set perfectly within a quirky, visually-stunning fantasyland that only Michel Gondry could imagine."

The deal was negotiated by James Emanuel Shapiro on behalf of Drafthouse Films and Vanessa Saal Senior VP international sales at Studiocanal.