Now that the World Cup is over, for Mexico that is, it's time to get back to the movie theaters!

This week marks the wide release in Mexico of several worth while films, including the latest work of such auteurs as Sono Sion and Lars von Trier. There's also stuff from Hollywood, a Spanish box office hit, and a Mexican rom-com. You can find the details and Mexican trailer for each effort in the gallery below, as well as a ScreenAnarchy review whenever possible. There's plenty to choose from!

All the films will be released in Mexico on Thursday, July 3.

After being exhibited in Mexico as part of FICUNAM, Riviera Maya, and Cineteca Nacional’s Muestra 56, Sono Sion’s Why Don’t Play In Hell is finally opening at regular cinemas. I had the chance to watch it during FICUNAM, and it’s definitely one of the most fun times I’ve had this year at the movies. Really great film and, certainly, this is the last chance to watch it on the big screen.

Why Don’t You Play In Hell is distributed in Mexico by Interior 13, under the title Vamos a Jugar al Infierno (Let’s Go to Play In Hell).

This is to Spain as Eugenio Derbez’s Instructions Not Included (No Se Aceptan Devoluciones) is to Mexico; which means Ocho Apellidos Vascos was a real box office phenomenon and became the all-time top grossing Spanish film in its country of origin.

Our own Brian Clark, Shelagh M. Rowan-Legg, and Carwyn Jones have been following the track of this Spanish hit on Twitch’s Euro Beat column; this is what Spain-based contributor Jones said about it:

"It’s a romantic comedy about Rafa (Dani Rovira), who for the first time leaves Seville, in the south of the country, and travels to the northern Basque region to win the heart of Amaia (Clara Lago). To do this, Rafa has to pretend to be Basque, so the humour is very localized to Spain and leans on a fair few regional stereotypes along the way. Since its release in mid-March, it’s taken more than €44.2million and has become a potential new marker for homegrown films. Some are saying it’s a turning point in the domestic scene after a few years of box office doom and gloom. Rumours are circling of a follow up next year with the same team and cast, this time taking aim at Catalonia."

Now it’s time to see how a Spanish comedy with local humor works in Mexico.

Ocho Apellidos Vascos is distributed in Mexico by Amarok Films. 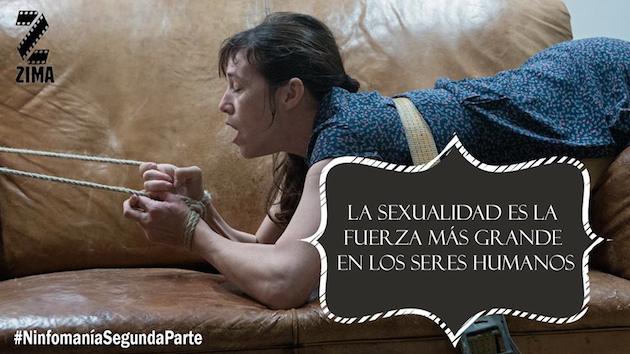 Lars von Trier’s Nymphomaniac Vol. II will be playing at Cineteca Nacional, as part of the 34 Foro, and also at regular cinemas. There’s really nothing much to add, as it’s one of the most anticipated films of the year, especially if you watched the first volume.

Nymphomaniac is distributed in Mexico by Zima Entertainment.

While I really dig Seth Rogen, I didn’t care at all for Neighbors. Then I watched the trailer and actually began thinking it might be a whole lot of fun to see Rogen in a non-stop war against the Zac Efron lead college fraternity he has for neighbors. Neighbors already had a pre-release and played last week at selected Mexican cinemas. Now it is expanding to more theaters, under the title Buenos Vecinos (Good Neighbors).

Review by Peter Martin - NEIGHBORS Goes Directly For The Raunch

The only Mexican production to be released this week in Mexico is Mariana Chenillo’s romantic comedy Paraíso (Paradise). It was screened last year at TIFF and Morelia; I watched it during the latter, and thought it was a decent if formulaic effort.

Paraíso is distributed in Mexico by Videocine.

Do you feel this content is inappropriate or infringes upon your rights? Click here to report it, or see our DMCA policy.
Jersey BoysNeighborsNymphomaniacOcho Apellidos VascosParaisoWhy Dont You Play In Hell