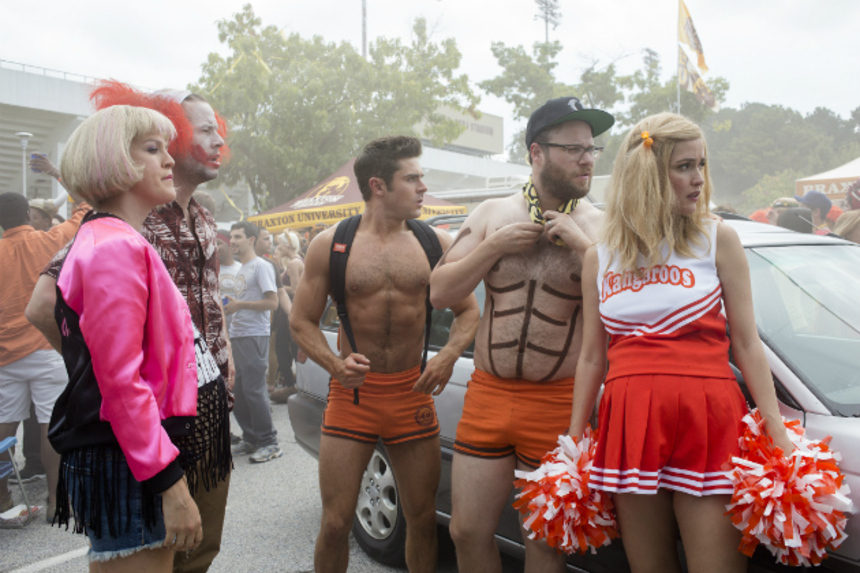 A fairly wretched and sloppily assembled sequel, Neighbors 2: Sorority Rising is too lazy to conjure up anything new for its putative heroes to do. Instead, the focus turns to delivering an oddly mixed message: young women can still be empowered, even if they're not that bright.

First-year college students Shelby (Chloë Grace Moretz), Beth (Kiersey Clemons), and Nora (Beanie Feldstein) are living on their own for the first time and want to enjoy their freedom. They've decided to join a sorority, but the stern sorority president (Selena Gomez) informs them that alcohol and drugs are not permitted and, even more discouraging, sororities in the U.S. cannot throw parties. (Not exactly true, but this movie doesn't exactly take place in the real world.) Instead, sororities must cohost parties with fraternities for true craziness, and the young ladies are frankly repelled by the rampantly sexist antics of the young men at the first party they attend. (Nora describes it as "rape-y," which appears accurate.)

Having bonded in frustration, the trio of women realize that the dormitories are only slightly better and decide to find off-campus housing where they can establish their own sorority and party like it's 1999. Since the movie is a sequel, they end up renting the big old house that's next door to our putative heroes, Mac (Seth Rogen) and his wife Kelly (Rose Byrne).

Mac and Kelly's daughter Stella (Elise Vargas and Zoey Vargas) is a couple of years older and Kelly is pregnant, so they've bought a new house in the suburbs to accommodate their growing family. As the movie begins, they sell their old house; all they have to do now is endure the 30-day escrow period (when the buyer can cancel the sale).

With rowdy teenage girls eager to party next door, however, Mac and Kelly fear that they will spoil the deal. So the "old people," as the girls call them, plot and contrive and manipulate to stop the noisy parties and ensure the sale of their house. As with the original 2014 Neighbors, the sequel is not concerned with narrative logic or character development. All that returning director Nicholas Stoller needs to do is push the movie through all its episodic ramblings, allowing time and space for the juvenile comedy situations to emerge.

To do that, however, he must rely on the screenplay to provide a blueprint, and it feels like the six credited writers -- Stoller, Rogen, Rogen's writing partner Evan Goldberg, and original writers Andrew J. Cohen and Brendan O'Brien -- sat in a hot room, cracked jokes, smoked weed, and threw something together on short notice, perhaps imagining that the cast could improvise funny stuff on set to fill the time.

Whatever the true nature of what happened, Neighbors 2: Sorority Rising plays like a pale version of the first movie. Lacking any spark of originality, it depends even more greatly on profanity and slapstick, not only recycling routines (with only slight variations) from the original, but also stealing from itself.

A strength of Neighbors were the opportunities given to Rose Byrne to steal scenes. That's missing here, and the absence of those moments is palpable. Little thought has been given in the sequel to distinguish Mac and Kelly as individuals; they are yoked together as a married couple and they present a united front, but truly it feels like the actors could have switched roles with nary a change required in the dialogue.

That brings everything back to The Message, which is partially delivered through the character of Teddy Sanders (Zac Efron), the fraternity president in the first film. Unlike his frat buddies, Teddy is truly lost in his post-collegiate world. He spent his college years partying and now has no idea what he wants to do with his life. Initially, he fits in naturally with the members of the unofficial sorority house, but he's ... old (by comparison) ... and so they chuck him, turning him against them and prompting him to ally with the other "old people," Mac and Kelly.

Moretz, Clemons and Feldstein are fine in their portrayals of young women searching for their place in the world. The characters are much like Teddy in his college years, though, interested only in partying. They exhibit refreshing (and firmly held) common sense and good instincts when it comes to avoiding potentially dangerous situations, but exhibit no intellectual curiosity otherwise.

Really, they appear to be no smarter than Teddy, which makes the next few years for them look bleak. What will become of them? Will they end up like Teddy? The movie barely covers the first month of college, so perhaps that's too much worrying about the career and life prospects for 18-year-old women in a Hollywood comedy.

Then again, perhaps if I found the comedy to be funny, I wouldn't care.

The film opens in theaters across North America on Friday, May 20.