Morelia 2013 Review: How To Lose Weight And The Love Of Your Life In The Bittersweet But Formulaic PARAÍSO (PARADISE) 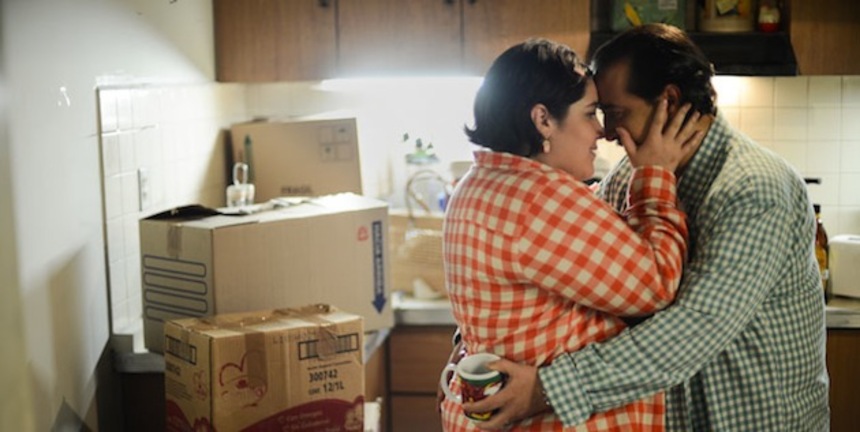 Paraíso (Paradise) is an unconventional love story, at least on paper. This because the protagonists are far from a typical big screen plastic, pretty couple, the movie instead following an overweight Mexican couple. One can accept and even appreciate Mariana Chenillo's decision to work with characters that are real people with real problems without becoming overly serious. Paradise wants to explore an important issue like obesity - after all, Mexico has the world's highest obesity rate - while not pretending it is more than light entertainment, clearly inspired by American indie comedies.

Carmen (Daniela Rincón) and Alfredo (Andrés Almeida), a married couple from Ciudad Satélite, decide to move to Mexico City, when Alfredo gets a good job at a bank. The first shots of the film capture nicely the most famous spot of Satélite, and in general Chenillo tries to connect with those persons who find a really stressful and complicated city when moving to Mexico's capital. But this is an inconsistent element, as the real problem here has to do, certainly, with Carmen and Alfredo's obesity.

The film has a constant bittersweet tone. On one hand there's the clear intention of creating something fresh and fun, always accompanied with pop tunes (including a modern cover of The Turtles' "Happy Together" and Alaska y Dinarama's "Ni Tú Ni Nadie") and even some cartoonish characters (Nosotros Los Nobles' Luis Gerardo Méndez is actually amusing as a fitness coach). And on the other, there's Carmen's dissatisfaction and suffering, through a believable performance by Rincón. Actor Almeida is remarkable as well, losing the weight he probably first gained for the role.

Paradise is more a hit than a miss though it can't avoid landing in the romantic comedy formula. This shouldn't strike as a surprise, since a marriage drama is built from the moment Carmen is once again worried about her weight. The drama works just fine for the most part but, to be fair, makes the movie as predictable as the typical rom-com. It allows genuinely funny situations and, most importantly, makes us care for this couple, but also goes for (almost) gratuitous stuff like a cameo by Carlos Loret de Mola (a popular Mexican anchorman).

I'm not sure why Chenillo couldn't come up with something a little more original than the usual public appearance of the protagonist, which helps solving all the problems. In this case, a subplot emerges when Carmen becomes a regular assistant of a cooking class, finding real happy moments and eventually becoming part of a television contest. As you can tell, Chenillo ends not doing much to stay away from the formula, and all the funny or serious approach to the overweight problem is no longer relevant as the power of love overcomes everything. Still, and thanks to Rincón and Almeida, Paradise is more credible than the average Mexican romantic movie.

Do you feel this content is inappropriate or infringes upon your rights? Click here to report it, or see our DMCA policy.
Mariana ChenilloMorelia 2013Morelia International Film FestivalParadiseParaíso