Destroy All Monsters: All The World Is Waiting For You, Wonder Woman 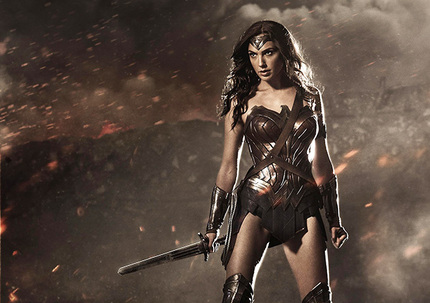 What a difference a year makes. At last year's Comic Con, Wonder Woman was "tricky." At the 2014 event, she was the belle of the ball.

Admittedly, it was a slow news year. Zack Snyder's reveal of Gal Gadot's costume for 2016's still horrendously titled Batman v. Superman: Dawn of Justice was the loudest sizzle at an event that keeps itself carefully devoid of steak. Aside from a roaring Mad Max trailer and the announcement of a sequel to Guardians of the Galaxy, what did Wonder Woman have to compete with, news-wise? A King Kong prequel?

Let's take a moment to doff our caps to Henry Cavill, who's having the sort of career ignominy we've come to expect of our Superman actors: he's now arguably playing third banana, in terms of audience interest, in the sequel to his own movie. I hope Brandon Routh buys him a beer sometime.

That horrendous title, Batman v. Superman, gets it half-right: this event movie is, certainly, half about Batman. The other half though, beyond question, is about Wonder Woman.

This does not mean that Wonder Woman will necessarily occupy more than a fraction of the movie's screentime. (We have no idea.) She might be a major supporting character, or she may show up for three minutes at the climax of whatever super-fight levels Gotham City and kills ten million offscreen civilians at the climax of Dawn of Justice, and urge the boys to stop fighting. We'll find out in a couple of years.

But Dawn of Justice has become, to a real and frustrating degree, Wonder Woman's movie. Rebooting Batman will always come with its level of fan fascination, but it has, at this point, been done four times. Wonder Woman has never been done at the movies, the largest untapped reservoir in the pantheon of major comic book characters, and so all eyes are on her.

And her status in her first movie, as has been stated elsewhere but deserves repeating, matters. It matters that on a weekend where a female-lead action movie handily demolished the Rock's latest action movie at the box office, the internet stopped dead for a couple of hours on Saturday afternoon to debate the merits of the first big screen iteration of the famous Wonder Woman costume.

It matters that she's not in the title. It matters that she (and Batman) are gatecrashing someone else's franchise. It matters that Saturday's costume reveal is how she has been presented, as DC desperately scrambles to conjure up a mega-franchise out of whole cloth, having failed to do the prework for Superhero Franchising 101 like their distinguished competition.

Male comic book heroes, too, have long been presented to us from the outside in, as though an art director's ability to adapt the frankly insane aesthetics of traditional superhero costumes into functional, "real"-world clothing is itself a bellwether of the project's overall commitment to not sucking. In this category, the new costume passes muster: a little 300: Rise of an Amazon for my taste, but definitely not an "America: Fuck Yeah!" bathing suit.

Agreed, then, that the "costume first look" has become a traditional part of the rollup to a franchise's marketing, for men as well as women. Turnabout, though, is not always fair play.

A culture disposed to evaluating its women looks-first has once again been given the opportunity to do so, with no thought whatsoever to the character as a character, with context within a story in which she will be employed. Batman and Superman had their costume reveals this summer, too, but within a contextual frame (albeit rudimentary) of their respective purpose in Snyder's story.

And again, the reluctance on the part of both Marvel and DC to pony up the stones to present one of their female superheroes as primary, rather than supporting, is angering in the extreme, if only because in this frame, it might actually be possible. Women who kick ass on screen seems to be one of the few quadrant-proof basic concepts; men and women are both in the crowd, if the product seems promising, as Lucy ably demonstrated this week. A movie starring his very own Black Widow opened on the same weekend of Comic Con and made its budget back in less than 3 days, but did Kevin Feige jump up and announce a Black Widow movie, a Captain Marvel movie, a Gamora movie, or a team-up flick where Pepper Potts and Jane Foster get together and solve crimes? No. Of course he didn't.

This, in the movie universe anyway, is what women are: they are supporting. Normalcy is white, male, straight, and American (even the hero of the far-flung Guardians of the Galaxy falls into all four of these categories). Everything else - from an African-American Johnny Storm in the Fantastic Four reboot to completing the "Trinity" in a movie called Batman v. Superman: Dawn of Justice - is a Glenn Gould variation upon the superhero movie's sole, thin theme.

Oddly, the only superhero space that seems to now be in a position to take the kind of liberal risks that the movie franchises resist are the comic books themselves, likely because the sales numbers are so generally low - meaning that DC and Marvel form such a tiny line item on the overall balance sheets of their parent conglomerates - that they can pretty much do whatever they want.

Turning Thor into a woman is an amusing exercise, but far more impressive has been Marvel's (and, on a much slower rate of approach, DC's) awakening to the fact that a huge portion of their readership (reportedly 47%) is female, and interested in female-lead stories. Recent relaunches of Captain Marvel and Ms. Marvel, and the forthcoming Thor and Batgirl reboots, suggest at least a willingness to experiment in the representational space, if only on the short term.

If those titles don't succeed, the companies will certainly fold up their tents and return to Boy Thor and his brethren, but for now, the latitude in the mainstream comic books is surprising and impressive. (Translation: buy these comics, everyone. Vote with your dollars.)

Another thing worth noting: as of this writing, 2014 is the first summer box office season since 2001 without a $300M-grossing hit, and it may remain so. The last films to cross that earning boundary in the United States were Frozen and The Hunger Games: Catching Fire, and the record may very easily hold until The Hunger Games: Mockingjay is released in four months. There is no question, at least right now, about who is ruling the franchise box office.

Now, this may be wishful fancy on my part, but: imagine the kind of money Batman v. Superman: Dawn of Justice might make, if it were just called Wonder Woman.