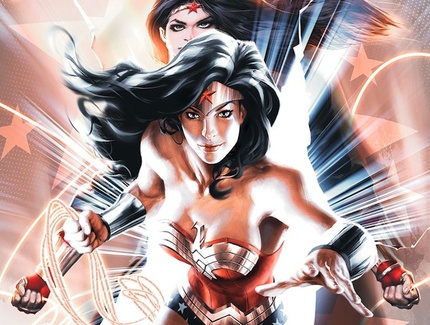 DC Entertainment is a conglomerate in trouble, losing ground year by year to their Esteemed Competition, and losing the comic book movie race hands-down. Having handily established a pathological inability to set up a comic-based film franchise with anything other than a "Bat" in the title - Superman Returns, Green Lantern, and even Man of Steel's sputtering, post-opening-weekend slump - DC has all but admitted defeat by announcing that the next film in their canon will, indeed, have a "Bat" in the title.

Superman/Batman (whatever it ends up being called, it will definitely have a "Bat" in the title) will arrive in 2015 to find DC another half-dozen steps behind Marvel Entertainment. Marvel has essentially written the book on empire building for the mega-franchise 21st century. Marvel is aiming for a Phase Three of their run of profitable comic book movies (of increasingly obscure origins, per Guardians of the Galaxy), while DC is still fucking around with prototypes. Further, having gotten away with Thor, Marvel has given a jubilant middle-finger salute to all parties who think that any corner of the comic universe is too weird for a blockbuster adaptation.

Something else got announced at Comic Con a couple of weeks ago, besides Bats/Supes: DC president Diane Nelson announced that Wonder Woman is "tricky." The quote arrives in a context where Nelson seems to be affirming her organization's commitment to developing the character for movies and television, while simultaneously (of course) absolving herself and DC from any responsibility to actually solve the problem:

"We have to get her right, we have to. She is such an icon for both genders and all ages and for people who love the original TV show and people who read the comics now. I think one of the biggest challenges at the company is getting that right on any size screen. The reasons why are probably pretty subjective: She doesn't have the single, clear, compelling story that everyone knows and recognizes. There are lots of facets to Wonder Woman, and I think the key is, how do you get the right facet for that right medium? What you do in TV has to be different than what you do in features. She has been, since I started, one of the top three priorities for DC and for Warner Bros. We are still trying right now, but she's tricky." (The Hollywood Reporter)

"Amazon is on pause (as) the script is not exactly what we wanted, and with an iconic character like Wonder Woman, we have to get it right." (Deadline)

Well at least we're corporately aligned on the key talking points: a) Wonder Woman is "iconic," and b) when creating any media franchise around her, "we have to get her/it right."

Looking past the outright fibbing in Nelson's quote (besides Superman and Batman, what other comic book hero has a more singular, clear origin story that most of the audience knows or will recognize than Wonder Woman? How many regular folk knew who Tony Stark was in 2006?), there is subtext aplenty to unpack in Nelson's description, all boiling down to that rather amazing bit of anti-branding right at the end: "tricky." In a single statement, Nelson has argued for Wonder Woman's importance while tarring her viability as a franchise, and done it all without mentioning the elephant in the room: the inconvenient reality that, per the second word of her name, Wonder Woman is, in point of fact, a woman.

(On the relative complexity of adapting the character for film: Nelson should consult her own back-catalogue. DC Animation made a fairly terrific Wonder Woman movie about four years ago, which went straight to Blu-ray. It perfectly establishes the origin story of Diana, works out a nice sexual tension between Wonder Woman and Steve Trevor, sets up Ares as a substantial villain, and leads to a grand finale battle between Ares' legions and the women of Themyscira in Washington, DC. Shot word-for-word as live action, Gail Simone and Michael Jelenic's script for Wonder Woman would be a fine franchise kickoff.)

The Men are From Box Office, Women Are From Tricky board game hit a dizzying zenith in the summer of 2013, when men of all stripes met on the cinema screens to beat the holy hell out of each other while a vexing bevy of supporting babes looked on from increasingly contextually-troubling sidelines. We had underwear-clad Alice Eve, amnesiac bad girl Michelle Rodriguez, superpowered Pepper Potts, and a surprisingly canny Lois Lane, but the only woman onscreen in male-dominated movies all summer who was not defined by her romantic connection to her film's main dude was Rinko Kikuchi in Pacific Rim, in an out-of-the-park homer by Guillermo Del Toro that was all the more singular for the wasteland into which it was played.

In a movie universe where women (and, to be fair, a lot of the men) have been defined by characteristics before they are ever defined as people, Mako is a weird, humanistic triumph in the middle of a movie about giant robots beating up mega-slugs. For all the problems I've had with Del Toro's writing for women in some of his past projects, I'll give him this: he punches from the heart. And when one of his characters connects, she really connects.

All of which brings me back to Diane Nelson's quote, and Mark Pedowitz's quote, and what pisses me off about both of them: by defining Wonder Woman as "iconic," they've removed from her any requirement, by the studios or by us, to look on her as a person rather than as a figurehead of an imagined feminist wonderland where any girl, boy, or other can put on a star-spangled bathing suit and kick some ass.

This has been happening in the comics quite a bit for the last couple of decades too, as Wonder Woman has graduated from any sense of relatability or even on-the-ground superherosim, and moved towards an austere godhead - an avatar of love and empathy, but not someone you'd ever want to get to know personally. You'd never invite Wonder Woman out for beers - and why the hell not? It's Wonder Woman, for crying out loud. In any realistic conceptualization of what her superpowers would mean, she could drink you under the table, solve your life story, and carry you home.

But Wonder Woman remains the bottleneck against which any notion of creating a superhero franchise staged around a woman repeatedly slams. Sure, I have a sick fondness for the silly 1984 Supergirl movie (and will go to the mat insisting that a Supergirl movie in this decade would make a kajillion dollars), but as long as Wonder Woman - tricky, iconic Wonder Woman - is sitting there guarding the passage to the utopia where girls get to have superhero movies too, we're not going to get anywhere.

I have to assume that's the game. Wonder Woman is there, and she's tricky, and she's iconic; and thus branded, she doesn't ever have to be solved, and by extension, neither do any of the others. The best female superhero portrayal, maybe ever - Scarlett Johansson as Black Widow - gets to remain comfortably supporting-role; and that one was personally architected by Joss freakin' Whedon, who wrote the book on female superheroes and thinks, rightly, that quim is a lovely word. The same Joss Whedon, of course, whose Wonder Woman project fell apart at DC six years ago.

By dint of what's between her fictional legs, Wonder Woman does bear a burden of responsibility to a ludicrously male-slanted heroic universe. A Green Lantern project is allowed to fail for reasons having nothing to do with Ryan Reynolds' CGI tallywacker; a Wonder Woman movie only fails because it's a Wonder Woman movie.

And to bring it all full circle, that unfortunately means that yes, dramatizing her for the popular masses is tricky. But then, it's tricky to do just about anything worthwhile.