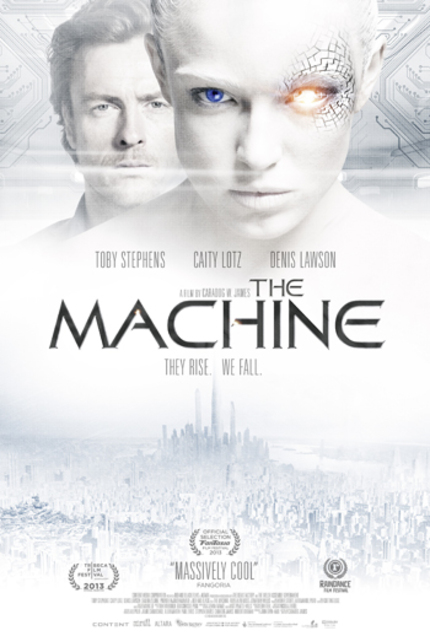 With the Blu-ray/DVD release just around the corner (June 17th) it is time to whet your appetite for Caradog James' sci-fi flick The Machine. We have an exclusive clip to share with you.

Set in the near-future Britain, two computer programmers fall in love as they create the first-ever piece of self-aware artificial intelligence, designed to help humanity. But things go terribly wrong when the British Government steals their breakthrough and teaches it to become a robotic weapon. The film is written and directed by new filmmaker Caradog W. James and stars Caity Lotz (Arrow) in a breakthrough role as "Ava" the machine alongside Toby Stephens (Black Sails) as the other computer programmer.

This clip is at the opening of the film so there is no risk of giving away anything important. In it, Vincent (Toby Stephens) is testing two different A.I. systems. The real meat of the story happens when he and Ava (Caity Lotz) begin working with each other shortly after.
Sign-In to Vote
Tweet 0 Submit

Do you feel this content is inappropriate or infringes upon your rights? Click here to report it, or see our DMCA policy.
Caity LotzCaradog JamesThe MachineToby Stephens

More about The Machine

I actually watched this movie and it is decent, but nothing special, I give it a 6, and that's probably because I love sci-fi.

I've read some seriously exaggerated reviews praising this as "the new Blade Runner" and that's absolutely not even close to reality, don't believe those. It is a well crafted B-movie with some "soul" but not enought to be remembered on the long term.

Black Sails' Toby Stephens is a worderful actor.
Try this movie, you will give it a 6 too probably.

I read Caity Lotz and decided not to watch the trailer, haha. I'm a secret watcher of Arrow (which already is pretty cheesy), but damn, ms Lotz does not help make the show better. Not a great actress (it seems her fighting skills are a big part of why she got the job?).

I don't watch Arrow so this Cait Lotz was pretty new to me. She tries so hard to be like Dren from Splice (2009) and most of the time she is successful in mixing the "innocence" of a creature with some sensuality of a woman, but sometimes the result is weird. Not the best actress I ever saw, for sure, but her role in The Machine is not easy and she is not really that bad.

Lotz is amazing as The Machine, her delivery, her precise moves, the amazing physical skills (she did all of the stunts herself!). She's ok on Arrow, but this movie as well as The Pact and Death Vally convinced me she could be a great action star. Also the movie itself awesome with cool atmosphere (cinematography and music are stunnning) that brings to mind classic sfifi flics :)