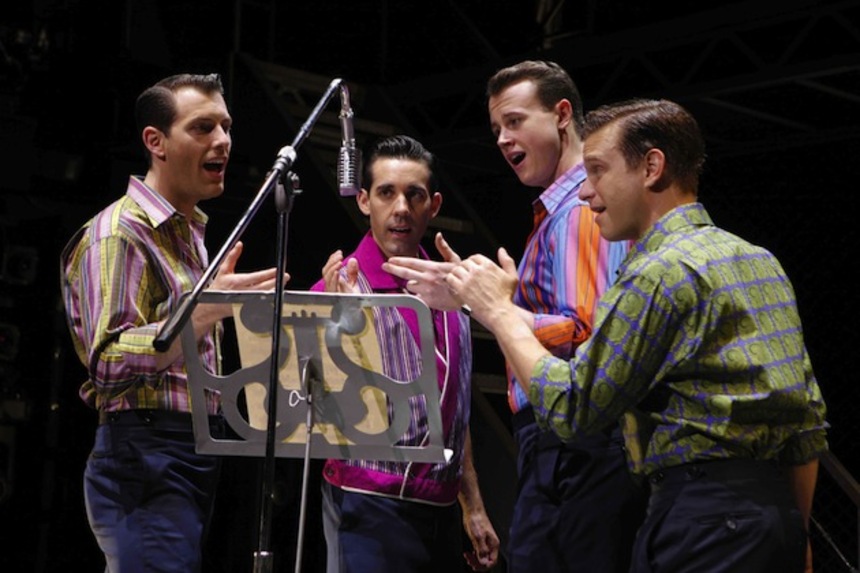 I probably went into Jersey Boys with expectations that were too high.
That's not to say I expected some grand musical masterpiece, delicately crafted and impeccably told. No, I just wanted a decent popcorn flick about a couple of wise guys from outside Newark that made it big by singing some tunes.

What's the worst that can happen? We get a few decent songs, we hear a bunch of falsetto, Christopher Walken will mug for the camera as a gangster, and it'll all be in and done before things go too far awry.

I can't speak for the stage show, but I can attest to this: Jersey Boys, the film, is abysmal.

If you don't know already, this is the tale of Frankie Valli and the Four Seasons, one of the most celebrated vocal groups, who had an enormous string of hits in the 1960s. Valli's falsetto is the key hook to their sound, but there's a growl in his voice when it drops, a rasp not so far removed from another Jersey Boy, who, a decade on, would talk of being born to run.

If there's a core thing missing in this film, it's that rasp. It's as if even when things are shown to go bad in this film, they do so with a blandness that's discomforting, making the sweet harmonies seem saccharine.

They wanted to be bigger than Sinatra, but the Four Seasons equally wanted to be rock-and-roll, or at least twist it in their own fashion that meshed the harmonies of the 50s with the  nascent garage-rock sound of the 60s. Listen to the songs: the drums thump, the guitars chime, and it become far more than just the special effect of Valli's soaring lead popping from the four-part harmonies. This is the blend between the low and high, the sweet and sour, and it's that dischord that the film tries, and fails, to properly account for.

I have no hatred for Clint Eastwood, and genuinely hoped his musical sensibility -- he's an accomplished jazz pianist, don't you know -- would help provide some swing to the film. He cast John Lloyd Young, the Tony-Award winning lead from the stage show, and surrounded him with the likes of Boardwalk Empire's Vincent Piazza, which all sounded good on paper. Hell, all they had to do was make the songs sound good and the story tight and engaging, and they'd be halfway there.

Employing a breaking-of-the-fourth-wall motif, Piazza speaks directly to the audience about the rise of this motley group of paisans from the projects. At first, this proves to be engaging, but when other characters don't do the same (particularly the character of Valli), it becomes even more jarring. There's a scene late in the film where Valli is talking to a character off screen, and you half expect him all of a sudden to turn to the audience and vent.

That's not the only vestige from the show that feels forced to the point of ridiculousness -- seemingly unable to work the hit "December 1963 (Oh What a Night)" into the narrative, we have a horrid little horn version in the opening credits, a montage version during a climatic scene, and finally, and most egregiously, a call-back dance number at the finale. This singalong conclusion is vinegar in the wound, and even the preposterous inclusion of a keytar (A keytar! What era is this?!) can't even make things work in an ironic or kitschy way.

This isn't a musical, per se, it's a musical bio-pic like Ray or Coal Miner's Daughter, but it's these residual stage elements that really make it an absurd hybrid. From Keystone Cops-like capers to sad-in-a-diner clichés, the film trundles along without originality or guile. Storywise it plays as an appalling apology for Valli's valiant efforts to keep the band alive and his daughter from harm. As a test, I dare you to ask any audience member the names of his other two children that we briefly see shielded by his harpy-like ex-wife, clearly not warranting our attention as they are not bound for convenient tragedy. If this wasn't based on actual events, it would be completely risible.

It's an unfair comparison, it's true, but I think it'd be good to screen this for future audiences back-to-back with Inside Llewyn Davis. There's a film that gets the surreal misery just right, the mix of drama and dark comedy and musical expression down just perfectly. You can even look to Ray, Taylor Hackford's rich and righteous take on Charles' demons, to see how the tunes and performances can uplift even the most archetypal of stories.

Instead, the songs clunk along, their performances overly orchestrated to the point of inanity. These are pop songs that don't pop, rock edges filed off to become almost easy listening atrocities. Worse, while the singing is captured with feeling, the appalling miming of the background performers with their instruments is infuriating. It's a film about musicians, made by a musician; how hard is it to find a drummer to actually be poking away back there at the kit, hitting the skins in some semblance of time as the tunes click by?

The lack of subtlety with the performances, with the bada-boom, goombah slang making it feel more like an Olive Garden commercial, provides no real insight into these guys and their struggles. If the singing and dancing finale wasn't broad enough, then the heightened "hey-oh", "Guido"-ness of these stereotypes should rankle even those who still pronounce the word as "Eye-talian" and think that spaghetti is still too ethnic of a cuisine to grace their table.

A good chunk over two hours, the film drags on and on to the point of ponderousness. This is the tale of The Four Seasons of discontent, yet even when it seems death is on the line, the film can't take things seriously enough to give the audience something to feel about for too long.

The film's incompetence is manifold, its performances wasted, its musical performances clunky and forgettable. Jersey Boys is a mess, I'm sad to report, something that's actually quite easy to take your eyes off of. Faggedaboutit, just throw on some of Four Seasons' many songs (including several excellent numbers that couldn't be pigeonholed awkwardly into this narrative) as a far better way of getting to what made these guys so memorable in the first place.
Sign-In to Vote
Tweet 0 Submit