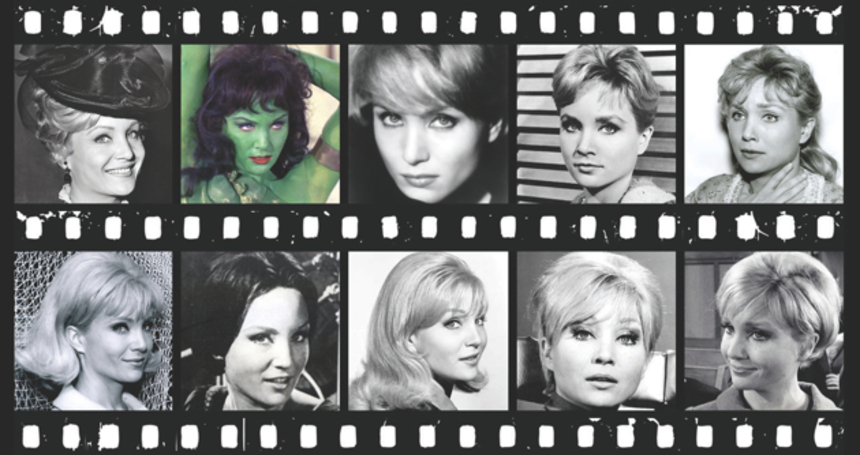 Proving in its own way that most actors of a certain era ended their careers with a guest spot on Murder, She Wrote before quietly going into obscurity, The Green Girl presents its sexy Star Trek hook, that of the Orion Slave girl, played by Susan Oliver, who gamely sways her curves on screen in spinach-coloured body paint, firing up the fecund imaginations of many a young sci-fi nerd.
Oh, those blue eyes. Her character's name Vina (also seen in the more natural blonde-haired pale skinned mode) has the faint ring of Venus, n'est pas?  But this is not a fan service affair. Beyond those clips from Gene Roddenberry's Star Trek pilot, "The Cage" (eventually aired later in the show as two-parter, "The Menagerie") rather a celebration of a compelling woman of agency, a prolific actress, an amateur aviator, and rare female TV director (in that era, and this one) who flew right to the edge of fame without ever quite finding it.
There is a compelling story in Ms. Oliver's near-stardom, another essay on the vagaries of Hollywood, with its liberal sensibility propelled by a conservative business model. Or perhaps that the value of a well lived, effervescent life should trump that of any legacy or estate left behind. Generously sprinkled throughout is the plethora of clips gathered, a veritable deluge in fact, of guest-star appearances on just about every TV show you can remember from the 1960s and 1970s (and many you probably cannot). Undoubtedly, her considerable acting talent is showcased as she steals scenes from many major film stars (Steve McQueen, Charles Bronson, Liz Taylor, Clint Eastwood, and Robert Duvall to name just a few).
The doc is never better than watching her acquit herself mightily. It is postulated that her refusal to conform to the 'Studio Contract' model (and in particular, Jack Warner) of the day pushed her to TV, and her reluctance to take a 'series' put in perpetual 'guest star' mode.  Did you know it there was a unofficial 'rule' that limited any actor to guest spot only once per season per show?  Oliver dutifully showed for up her quota for many shows over a long period of time, the ultimate serial-guest-star in The Twilight Zone, The Andy Griffith Show, The Virginian, and The Fugitive to name a few.
When the biography starts layering on her single-engine solo-flights across the North Atlantic, directing episodes of M*A*S*H and Trapper John M.D. -- she graduated from the inaugural class of the American Film Institute's Women's Director Workshop -- and living single in Laurel Canyon, you get the sense that the woman had her shit together and walked her own path, but was a few years too early to reap the rewards in terms of career advancement or conventional notions of mega-success. There were few if no women directors doing TV or film at the time.
By the time we get to Susan's declining health, the bankruptcy of her estate and finances, her taking low-rent acting jobs (alongside Angela Lansbury and Freddy Krueger) in order to maintain her insurance policy and eventual early death via cancer, there is a fair bit of emotion on the table and we are left to contemplate what the hell is success or failure in showbiz or life?
Director George Pappy Jr. wrangles a lot of interviews from friends, family, commentators, and television thespians (like Oliver, many of them are quite recognizable, but none of them are famous) reflecting on the excellence of Oliver as a human being and the collective bafflement that despite her ubiquitous presence on a medium watched by millions, she never achieved the kind of top tier Hollywood, capital "F" fame. This never led back to prime film roles that were the usual road-map of the era.
The assembly of the documentary leaves something to be desired, however. This is function over form, like much of the TV of that era, a bit draggy in the midsection, oft times perfunctory and episodic. Her story is great, but its execution never entirely takes flight, perhaps another indication of art imitating life. If this review reads like a summary Wikipedia page, well, I guess I am calling it like I see it, but there is still sparkle in those deep blue eyes contained therein.
[Note:The Green Girl screened at HOT DOCS as a part of THE DOC SHOP conference, and not in the regular stream of pubic screenings, but it was shown in its finished form.]
Sign-In to Vote
Tweet 0 Submit

A good documentary with the most clips of Susan Oliver's career that will ever be assembled. As such it is also a valuable overview of the early days of television. However, several problems come up. Ms. Oliver worked with scores of top-level actors, many of whom are still with us, yet none deigned to be in this documentary, and I'm sure they were asked. Especially curious is the absence of Jerry Lewis, with whom she made several movies and was clearly a friend who offered to pay her hospital bills at the end.
A second problem is the lack of any significant insight into just what made Ms. Oliver who she was. While many of her friends are on screen talking about her independent character, more revealing areas such as her relationship with her famous astrologer mother and her own puzzling romantic life are carefully breezed over, just given a few minutes of film time.
Finally, the documentary makes no attempt to put any of Ms. Oliver's work or life into perspective by use of a narrator or any analytical framework. The film is an endless series of TV and movie clips and talking head testimonials...there is no over-arching voice to bring it all together and offer up any kind of summation on who Susan Oliver was and why she might be important and worth remembering.

I find this to be an odd "critique.” Having seen the film, I was astonished that there were something like 40 different interviews (if I counted on IMDB correctly) - a remarkable number by documentary standards (many make due with less than half that number).

Assuming that all these famous people "were asked" to be in the film
is nothing more than that - assumption. Some of them may not have even
been deemed to be worth interviewing. If one knows anything about the
television industry, one realizes that sometimes you barely even get to know someone you've only acted with on a single episode. Clearly, she did know some of these actors better than others, and a number of them are interviewed in the film. Others may (or may not) have been asked but simply weren't available. Jerry Lewis, for instance, has been in terrible health for the past decade (he is 88, after all) and the word on the street is that he rarely agrees to any public appearances anymore (just look what happened to him 2 years ago at a Friar's Club event, where he collapsed and had to be hospitalized).

Susan Oliver herself would be 82 if she were still alive, and many of her living peers are in that same age range - what seems trivial to us (agreeing to be interviewed) is simply not feasible (or advisable) for some elderly people in declining health who could (pardon my being so blunt) drop dead on a second's notice because they tried to overdo it for the sake of being one of 40 interviewees about one of 300 people they worked with 50 years ago.

And don't even suggest that Sandy Koufax would have agreed to being interviewed - he NEVER agrees to interviews about anything. (The one exception in the past 12 years, which took incredible wrangling by the former editor of the NY Times Sports section) was for "Jews and Baseball: An American Love Story," and supposedly, that nearly fell through when he walked out in the middle of the first interview. Having such an aversion to interviews in general, and then being asked to talk about why you broke up with a woman you dated 50 years earlier - REALLY? How likely is that to happen? (Assuming, again, that he was even asked.)

Finally, on the interview question, there's an old rule of thumb in Hollywood: the more famous the person, the more likely they are to want money to do ANYTHING. A well-funded HBO documentary about a dead mega-celebrity will often feature a who's who of famous faces, both those who knew and those who merely appreciated the deceased's work. And trust me, every single one of those talking heads gets paid, and paid well (thousands of dollars per person - that's how it works). When someone's receiving that kind of money to talk on camera, what do we have? The truth? What the speaker thinks the interviewer wants to hear (and paid good money for)? And why, just because they are famous, would anyone assume that these the best people to interview? Are we interested in the facts, or are we just interested in "celebrity porn?" (From a producer/distributor perspective, it's always the latter, because that's what SELLS. But it may not make for the best documentary - just the flashiest one.)

I think the commenter above must have watched a different film than I did, because I thought the interviews included just about everyone who was still alive and close to her, especially in her later years (Mr. Koufax
excepted). And guess what? Not one of them could understand her
motivations, either. The film makes it very clear that she kept her
entire life a secret (notice that at 58 years old, as she was dying, a cousin on her mother's side phoned a brother on her father's side, and the two had never even met before). This point is made again by those who discuss her funeral, where the family members (and others) were all learning important things about her and her accomplishments for the very first time. This woman kept just about everything she did in her life a SECRET - from everyone! If those who knew and loved her don't know, what's the likelihood that a documentary is going to get to the definitive bottom of all that 25 years after her death? There's no doubt that the movie (and her life) are largely a study in self-destructive decisions and behavior, and as such, it's fascinating stuff, leaving the audience to ponder why. (And it's a bit much to expect the film to provide definitive, concrete answers to questions that are inherently unanswerable.)

As a final point, I was extremely grateful that this film didn't stoop to the
over-used, annoyingly old-fashioned device of relying on a narrator.
Instead, it cleverly weaves the interviews together in an organic, flowing way that makes a narrator unnecessary (and it makes great use of clips from Ms. Oliver's work that have surprisingly appropriate thematic resonance with the real issues of a very unusual life often characterized by baffling choices and decisions). If I wanted to be led by the nose by a narrator and overtly "here's what you should think" documentary filmmaking, I'd watch "A&E Biography" and 'E! True Hollywood Story." I'm
glad I have alternatives like this.