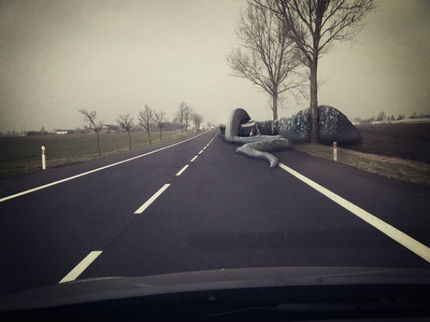 The first full trailer for Monsters: Dark Continent paints a much bigger picture of what to expect from the sequel to Gareth Edwards' 2010 original.
The teaser, released last August, did little more than establish the setting of the film in the Middle East. Now we get more context on the background of the characters in the trailer, as well as a different, harder-edged, yet still poetic mood than the dreamy, almost romantic atmosphere of Edwards' film. (My review here.) And the new synopsis (via Dread Central) makes the movie sound more like Apocalypse Now:

Seven years on from the events of Monsters, and the 'Infected Zones' have spread worldwide. Humans have been knocked off the top of the food chain, with disparate communities struggling for survival. American soldiers are being sent abroad to protect US interests from the monsters, but the war is far from being won. Noah, a haunted soldier with several tours under his belt, is sent on a mission: An American soldier has gone rogue deep in the Infected Zone, and Noah must reach him and take him out. But when Noah's unit and transport are destroyed, he finds himself with only a young and inexperienced cadet for company - the brother of the man Noah has been sent to kill. The two soldiers must go on a life-altering journey through the dark heart of monster territory, accompanied by a young local woman to guide them. By the time the three of them reach their goal, they will have been forced to confront the fear that the true monsters on the planet may not be alien after all.

I forgot this was even happening.

They really need to drop that horrible hip hop narration.

Rewatched Monsters again (fell asleep 2/3 of the way through the first time) and really enjoyed it. This sequel looks like an entirely different beast - kinda military centric like Aliens.

Not thrilled about the Heart of Darkness / Apocalypse Now route they went but it could have been a lot worse. Unlike, say, THE DESCENT: PART 2, I will most likely watch this.

now mash this up with Godzilla please