Review: MONSTERS: DARK CONTINENT, A Sequel In Name Only 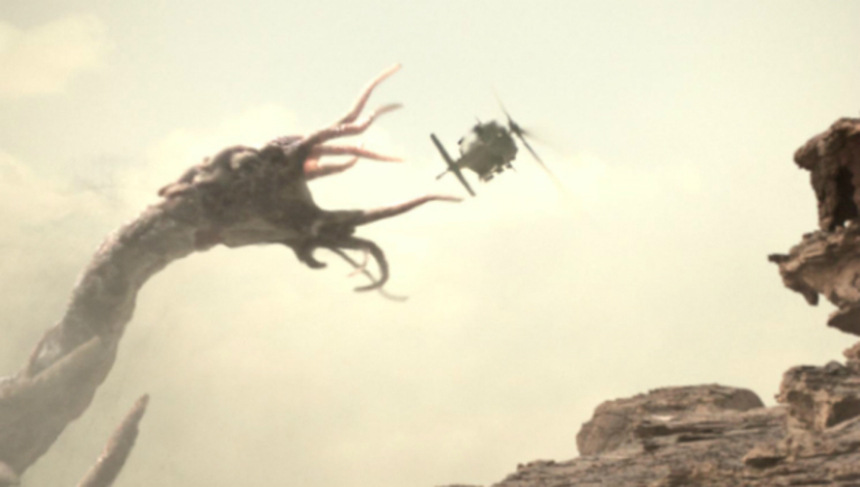 Four years after Gareth Edwards exploded onto the sci-fi scene with his inventive and industrious indie alien invasion flick Monsters, first-time director Tom Green delivers a sequel that bears little resemblance to the original, in tone, content or invention.

Reportedly set 10 years after the events of the first film, Monsters: Dark Continent introduces us to a tight-knit unit of US Army recruits, headed to the Middle East to continue an unspecified conflict. Parkes (Sam Keeley) and his buddies ship out for their first tour, only to be greeted by Staff Sergeant Frater (Johnny Harris), a shredded and shellshocked commanding officer barely clinging to his sanity.

Inevitably, the unit's largely irrelevant mission goes awry, and Parkes, Frater and the dwindling number of surviving teammates must successfully traverse the unforgiving desert wilderness if they are to survive hostile Arab forces and occasional altercations with the titular monsters. The region is now infested with all manner of alien species, from the giant, lumbering cephalopods witnessed in the first film, to herds of galloping antelope-like creatures, which mostly remain in the periphery, but will attack if they feel threatened.

Where Edwards' film threw a struggling photojournalist (Scoot McNairy) together with his boss' spoilt daughter (Whitney Able) and then developed an incredibly plausible love story as the couple traversed the Infected Zone south of the US border, Tom Green's film displays no such inclination for relatable humanity. Parkes and his bros are a detestable bunch of interchangeable lunkheads from the outset, who get their kicks drinking, whoring and gambling on dogfights when not falling to pieces (both physically and psychologically) on the battlefield. The none-too-complex notion that they are the real monsters, while the aliens are looking only for a peaceful place to call home, could not be delivered more bluntly or repetitively. For way too much of its lengthy running time, Monsters: Dark Continent exerts its considerable energies into being just another war movie. What could so easily have aspired to be James Cameron's Aliens to Ridley Scott's Alien, ends up as something far more reminiscent of Sam Mendes' Jarhead or Peter Berg's Lone Survivor - but proves neither as artistically ambitious nor as jingoistic as either.

Most disappointing is how little interest the film has in exploring or expanding the aliens themselves, or how humanity has managed (or failed) to co-exist with them. Intriguing opportunities are sporadically introduced - the aforementioned dogfight pits a pugilant canine against an equally vicious alien creature, we witness an alien birth and the spread of spores - but no attempt is made to investigate what any of it might mean.

But that is not to say the film is entirely devoid of merit. There is no denying that director Tom Green (who cut his teeth on British TV show Misfits) clearly has the technical chops to helm a feature film. Monsters: Dark Continent has a bold visceral, aesthetic that creates some startling imagery and intense action beats, that warrants being experienced as large and loud as possible.

Johnny Harris delivers a commendably intense performance as the ferociously unhinged Frater, and the film builds to a rousing, apocalyptic climax that throws the franchise wide open for plenty more exciting exploration if it continues. But for the most part, Green's exhausting veneer of sand, blood and testosterone fails to conceal a confused, un-engaging narrative.

One can only hope that a third Monsters film returns its focus to the increasingly indigenous alien lifeforms that roam and evolve among us. Where Edwards' micro-budgeted approach kept his protagonists away from the action and creatures, piquing audience interest and fueling our imagination in the process, Green just seems disinterested. Monsters: Dark Continent is a grueling and frustrating experience that replaces the subtlety and ingenuity of the first film with a relentless tirade of male posturing, loud noises and gunfire. The startling contrast proves as perplexing as it is undeniably disappointing.

Review originally published during the Sitges film festival in October 2014. The film is now available to watch via various Video On Demand platforms. It opens in select theaters in the U.S. on Friday, April 17.

Filmmakers do this all the time. They make a sequel to a popular movie that pisses all over the original and end up pissing off the viewer and curtailing their careers. I don't understand it.

This was such a mixed bag - the first half of the film was off-putting enough (with the douchebro displays) that I almost didn't make it to the second half, which is actually more tonally appropriate to the original film. Even though overall I thought it was a misfire, I don't think it lacked of effort, and I'll look out for what Tom Green directs next.

I don't think this will curtail anybodies careers. It's actually not a bad film in look and feel. The biggest issue is that the protagonists are not at all likeable and as Dean said above, for the first half of the film this is all you are dealing with. The second half is a lot better. I'd not go out of my way to recommend it, but it's far from a bad movie and Harris is excellent as the leader of a bunch of wet behind the ears squaddies.

I am not talking specifically about this particular film, but the overall desire to make less than successful sequels that piss all over the original "successful" idea. They do it all the time. It is tiresome.

I agree that there are times when it seems that a studio is willing to throw anything out as a potential franchise. It is tiresome and extremely frustrating when it happens to what could be a good genre property.

To me the way to go with a MONSTERS(I really did not like the original movie. The two main actors were just annoying) sequel, is to do the opposite of what the original movie did with the aliens. Instead of having them as background noise, bring them full front and center and make them the primary focus of a sequel.

it's always important to be specific in your examples.