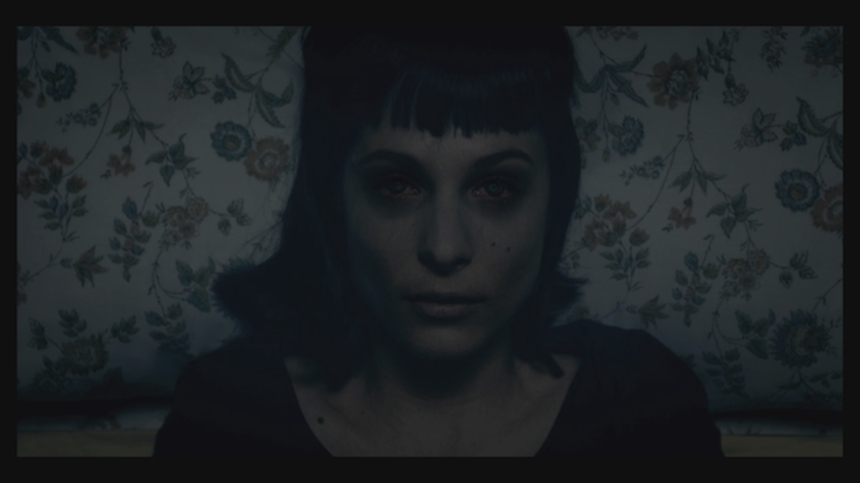 The countryside of Argentina is the setting for Martín Desalvo's Darkness by Day (El Día Trajo la Oscuridad), a little horror film that rests almost entirely on its two main actresses, Mora Recalde and Romina Paula.

They play Virginia and Anabel, two beautiful young women who, while related by blood as cousins, are quite different and not entirely familiar with each other. Darkness prevails in the wooded, foggy scenery of the film, and director Desalvo is not really interested in the gore or the thrills; this is all about atmosphere and the interaction between the two girls.

The story kicks off when Virginia's father leaves their countryside house in order to visit his sick niece (Anabel's sister), who has been in bed for some time. Next thing we see is a driver arriving at Virginia's home, bringing an unconscious Anabel to the door without offering much detail about the situation.

This is one of those movies in which we always know something ain't right and it will only be a matter of time for things to unfold. In fact, Desalvo is never hesitant when it comes to giving the viewers clues of what is happening, and even of what the clueless protagonist, Virginia, might experience later. The film mixes dreamlike sequences with flash-forwards, but everything is very subtle, always working for the mysterious atmosphere.

At the same time, we get to know more about these girls, with Virginia being the balanced character, the daughter who helps in the house, and Anabel revealing herself as the more extroverted person who abandoned a college major in the city of Buenos Aires. What the movie offers are natural conversations between the cousins, but the most important thing for Desalvo is again the mood; there's one sequence in particular that goes entirely for this, with the girls sharing a night of wine, old vinyl record listening, dancing, and, eventually, a strange mutual attraction develops that is more perceptible than before.

Darkness by Day makes you wonder if the climax will be worthy of the engaging, well-acted journey. Ultimately, and fortunately, the film doesn't change its tone abruptly, little by little disclosing what we have been expecting. Make no mistake; this is another approach to the vampire myth, one with characteristic imagery that is attached to an obscure tale of family and, of course, death. Expect atmospheric horror and you'll get a solid effort, though not exempt of some slips (wait for the last-minute surprise).

Darkness by Day will screen at Fantaspoa on Friday, May 16 and Tuesday, May 20.

More about Darkness by Day