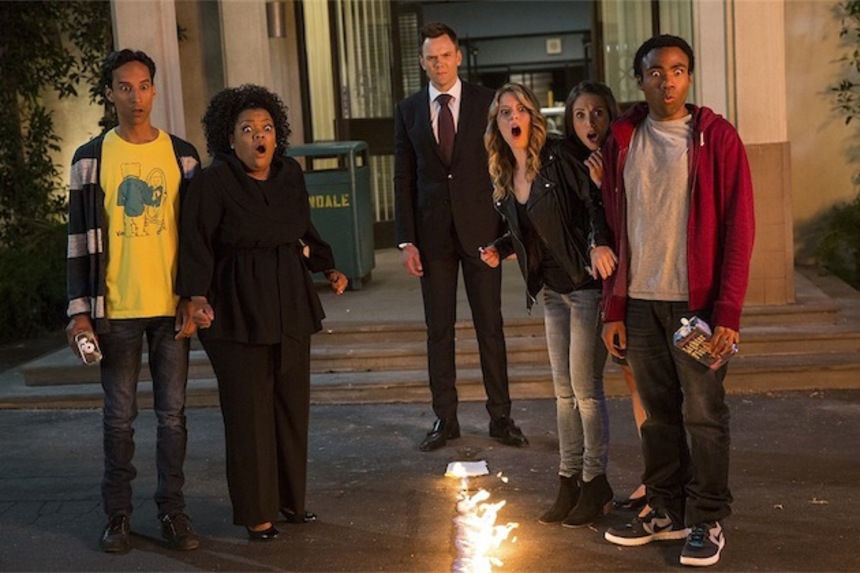 Community has been through so much over its five year run -- from lead cast members departing to the firing and rehiring of creator Dan Harmon as showrunner -- that cancellation, oddly enough, seemed to be less and less likely as the cult show inched along with its meager ratings in the junkyard wasteland that is NBC's primetime lineup. But the hammer has come down, and with NBC's upfront conference for next fall's returning shows all said and done, Community is left on the side lines.

Earlier this spring at the television festival PaleyFest, Harmon and his team were hopeful for a sixth season. "I think that we're old reliable, like a Tupperware in the fridge," Harmon stated. And this year's finale indeed put more effort into emphasizing that the Greendale gang would be back rather than not. But if a sixth season does come, it won't be happening on NBC.

As things go this news comes feeling quite anti-climatic in a number of ways. While the show gained back some quality ground in the re-Harmon-ized fifth season, one could argue that the show hasn't been great since sometime in Season 3. What's more is that fans of the show got so used to its 11th hour renewal every year that actual cancellation now feels even weirder than... usual?

The similarly rated Parks And Recreation got an early renewal this year, which seemed to indicate that Community would follow, as the pair of shows had arguably been the network's only comedic bright spots for years. However, NBC has full financial stake in P&R, while much of the money that Community generates goes to Sony. With that, there's a slim chance the rumored movie could still occur, or else/also a sixth season thanks to the likes of Netflix or Amazon. Of course, when a beloved show exits perhaps earlier than desired, this now always seems to be the hope of fans in the streaming age.

While I am perfectly fine with letting the show go at this stage, there's no denying that a bubble show like Community surviving in the ways that it did, for as long as it did (97 episodes!), is rather wonderful. And it's all because of the incredible group of people behind the show. So no matter its ups and downs, the cast, writers, and crew brought about some of my absolute favorite TV moments of my adult life. And really when it comes to ups and downs, well... I'd consider that great TV, TV that aims to be art, that aims for the existential or philosophical as much as the goofy and the meta, is all about that willingness to be bold, to swing for those proverbial fences and sometimes fail, and occasionally utterly so, but to then merely try again, or else do something completely different. More often than not, Community owned its failures with the same bold heart that it used to embrace its triumphs.

At any rate, only time, Sony, and Harmon can tell if there will be any kind of future for the teachers, students and hangers-on at Greendale Community College. In the meantime, then...
E Pluribus Anus, Human Beings. E Pluribus Anus.