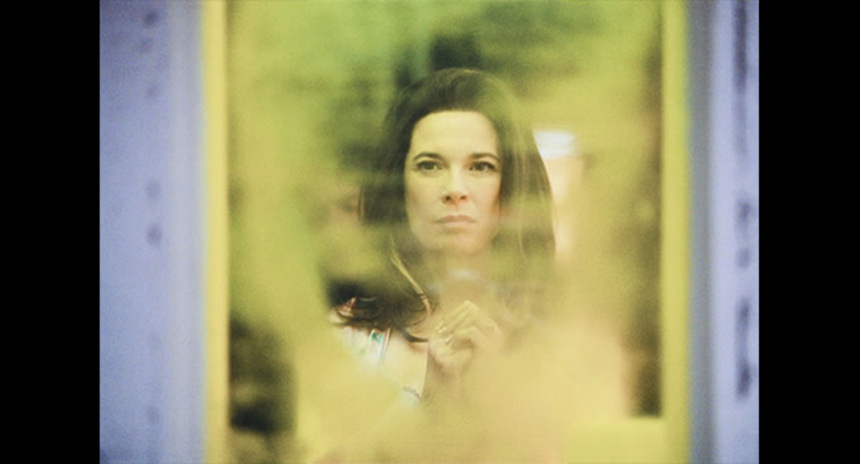 With Mommy, Xavier Dolan, at the age of 25, solidifies himself in the pantheon of great directors. It may sound hyperbolic, but the film features an explosive freshness, a delicate balance between humour and tragedy that's simply intoxicating.

Mommy is a beautifully realized piece that speaks to both mainstream audiences and the festival crowd. It included numerous visual quirks, including the decision to frame it using the vertical aspect used by those who don't know how to hold their camera phones when shooting video. This 9:16 framed within the widescreen frame could be an obnoxious gimmick, but thanks to some clever positioning by Dolan and his cinematographer André Turpin (shooter of the glorious Incendies by Denis Villeneuve), the narrow field literally opens a window into the fractious world of Die and her son Steve.

A title card informs us of a near future (as near as 2015) where a bill is passed to allow parents of troubled children to drop them off without questions asked at a hospital. Essentially, it's an old idea, the notion of institutionalization versus the challenge of interacting with the manic at home.

How accurately the tumultuous relationship between mother and son is portrayed from a mental health standpoint may be up for debate by those seeking out nits to pick, but from an emotional and cinematic standpoint, this is both flawless and in some ways groundbreaking. There's a rawness at play, a dance of language, movement, passion and anger, that's jarring and engaging.

Dolan and his ensemble of actors, most of whom were participants in his previous films such as Laurence Anyways, are driven to tell a tale that superficially may be quite conventional, but has some serious depth to both its emotional and narrative content.

The press screening at Cannes saw applause midway through the film when we are visually shown that, as per the dialogue, a longboard is a skateboard, but longer. The enlarging of the frame, the enriching of the visual palate, all provide an emotional lift that left chills.

The scene is so well earned, its cathartic power at that stage of the film so evident, that it felt (perhaps coloured by the strange airs that float within the festival bubble) like an instant classic moment, a thrilling rush like a blonde dancing in a fountain in Rome, or a bike flying past the moon with an alien companion in a basket. Scored to Oasis' "Wonderwall", it's a Scorsese-like bravado moment where music and image coalesce, as how the piano lick from "Layla" will forever evoke images of gangsters hanging in a freezer truck.

I felt anxious towards the end, as if all this buildup was going to somehow deflate into the ordinary. Yes, the film's a bit too long, and yes, Dolan does get a bit cheeky with the Peter Jackson-like extended endings. Yet the toying with flash forwards and acute emotional moments make up for any reservations.

Mommy could easily win the Palme d'Or, and it just as easily could win an Academy Award for Best Foreign Language Film. I bring this up, not as an awards junkie, but as someone who at times thinks that awards of these nature can help propel an artist into a new and interesting phase of their creative output, both a validation and what I'd hope would be an even easier road to realize projects that are to come (not, it seems, that he's suffering from being able to make films on a regular basis!). When Tarantino won for Pulp Fiction, it didn't alter his course necessarily, but it gave an imprimatur on his work that continues to this day.

Similarly, Dolan's film is so full of life and joy, it's experimental without being exclusionary, that I'd suggest it's the perfect kind of film deserving of this kind of attention.

It's entirely possible that, like Oasis, we're seeing a brief explosion by Dolan only to see the output diminish. Noel Gallagher famously released B-sides and singles that were the equal to his hit tracks. A more diligent artist would have done the usual thing, to bank these for future records. Gallagher still writes terrific stuff, but it's simply not as epic and anthemic as his earlier triumphs.

I'm not sure from this one instance that we can draw too many conclusions, but I'd like to think that Dolan is at the beginning of something extraordinary here.

In a year when we had a tremendous disappointment from Atom Egoyan, a previously high-flying Canadian director, and an interesting but flawed film by the undisputed master of English language cinema David Cronenberg, it's a treat to see that the most daring and audacious film comes from this Dolan kid who seems to be on a path to creating one of the more extraordinary film careers in my country's history.

Seeing Mommy at Cannes is one of those experiences you hope for at a festival, one of those "ah ha" bliss outs that you ideally get a couple times a fest (I've had my share already). I remain a day later buzzing about how it seemed to perfectly dance between the various shades of behaviour on display, the believability of the fierce response of love, frustration and protection shown between mother and son.

Mommy is simply terrific, already one of the best films of the year. It's a film of rare poignancy and insight told with a delightfully nasal Québequois timbre. With terrific visuals, exceptional use of music and performances that are both lasting and memorable, this is a top class international film deserving of as wide an audience as possible.