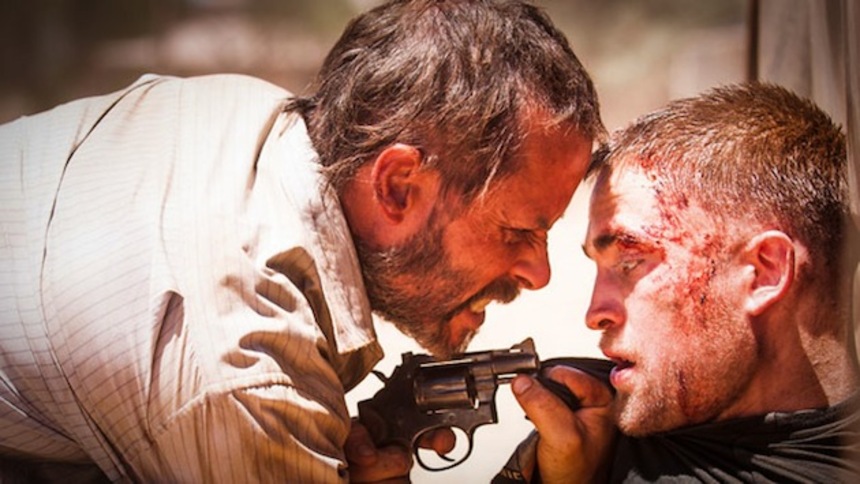 The Rover is a slow burn Western, a film with brief explosions of violence that are interspersed along a dry, dusty narrative landscape.

Directed by Animal Kingdom's David Michôd, there's a cold, calculating air to the film that may put off some viewers.

Guy Pearce plays the titular role, and it's played with a series of glances and grimaces during the introductory portion of the film. In a post-apocalyptic landscape, the man goes into a bar to grab a drink, only to have his car stolen by a bunch of bandits. Rescuing their abandoned vehicle, he sets off on a chase to recover his car.

This is archetypical stuff, but between the clichés is a tremendous little character piece. Pearce is fantastic as the Eastwood-like lead, as prickly as a cactus while giving off the cautious, introspective air of a stalking animal.

The screenplay is co-written by Joel Edgerton (a guy I'll always know as Owen Lars in the Star Wars prequels) and Michôd, and it provides a far more stark and bare-bones story than Animal Kingdom gave. It's a slow burn, to be sure, but it has the incessant nature of a Mad Max film being directed by Kurosawa, a hunt-them-down film that still feels like the stakes are almost universal even if the participants are so seemingly inconsequential.

We never really do get to the heart of what's plaguing the community, but it's clear there's a cancer at work socially, and small acts of kindness are the only real way of maintaining any sense of humanity, regardless to whom or what they're accorded.

The Rover eventually picks up Rey in order to help him track those he's following. Played by Robert Pattinson, this is a performance that much like the film is certain to divide audiences. It's a bit broad, to be sure, but I actually found the role quite engaging, exactly the kind of offkilter roles that the likes of Joaquin Phoenix is (sometimes undeservedly) applauded for early in his career.

I like the direction Pattinson is heading as an actor, choosing interesting roles over more genre fare. Like Ryan Gosling, it'll be interesting to see how long his superfans from Tween entertainment juggernauts will ride with him on his journey before moving onto the next obsession. For now, there are those that would never delve into a film like The Rover that will do so because of his star power, and that just might make fans of him in a very different mode.

The films grinds out its story line in an almost reluctant way, providing glimpses of motivation as the violence increases. I'm not sure there's much to be said from a deeply philosophic bent, but its cadence and inexorability does feel a bit like a cantankerous country tune, one that may be familiar but still knows how to pull the strings lyrically and is played by some fine, seasoned performers.

It's the steadiness of The Rover that is its most defining feature, a sense that you're perambulating towards an inevitable showdown and just along for the ride. It's a dessicated place to visit, but the world that Michôd and his collaborators craft is nonetheless a compelling one, if sure to be challenging for those wanting a bit more pace and a bit more plot.

Do you feel this content is inappropriate or infringes upon your rights? Click here to report it, or see our DMCA policy.
Cannes 2014David Michôdguy pearcerobert pattinsonthe rover