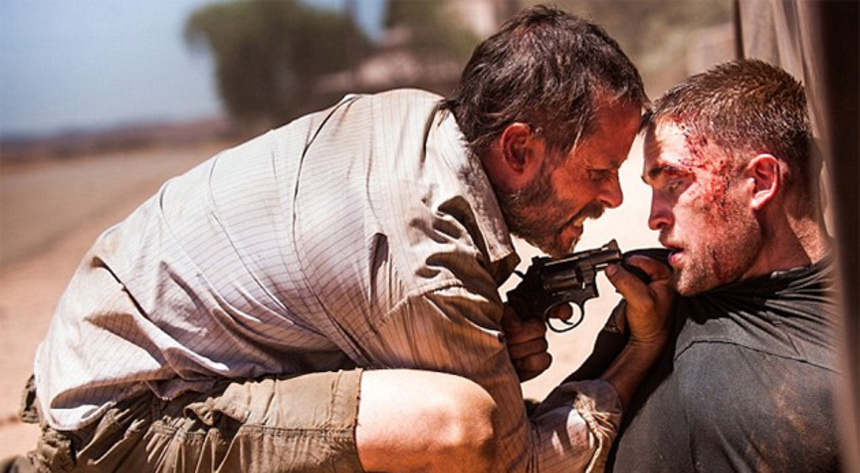 After the kinetic, Scorcese-like Animal Kingdom, David Michôd's sophomore effort takes a very different tack. Set in a desiccated Australia, post some sort of apocalypse that seems to inevitably befall the country/continent on screen.

After screening the film at this year's Cannes film festival (and giving it a positive review), I had the pleasure of speaking with Michôd (pronounced with "no 'd' at the end") by phone exclusively for ScreenAnarchy. We began by discussing the somewhat ambivalent reception the film had during its midnight screening on the Croisette.

How was it showing The Rover to the Cannes audience?

[It was] pretty overwhelming. In a strange way, I can't even really remember what emotional state I was in when that was happening because that state seemed to change every five minutes. It went from pure exhilaration to feeling like I'd been hit by a Versace truck, to constantly trying to work out what the hell people were making of this movie that I'd made.

This is very different than your last film, and I think Cannes in particular is a festival confined by expectations. What drew you to this kind of story?

I knew at the outset that I didn't want to just try and make Animal Kingdom again.

Animal Kingdom was such a dense, sprawling character drama. I really loved the idea of making a movie that was much more lean, [one] that would function almost as a dark, violent fable with very elemental, almost archetypal characters and a small number of them moving through a vast, empty, almost moonscape. I have no idea really what other people's expectations will be, and I found that any second I spent thinking about expectations was going to make me crazy and so I just decided to ignore them and make the movie I wanted to make.

Yeah, but that wasn't necessarily to do with my anticipation of people's expectations. In some ways it just had to do with what kind of an experience I wanted to have as a filmmaker. I loved being able to play in The Rover in a slightly more heightened world and to play with silence and space, to do something narratively that was much leaner.

When I look at the list of best films of all timethat you did for Sight and Sound, I see selections  like THE ASSISINATION OF JESSE JAMES, MAGNOLIA, THIN RED LINE, and TAXI DRIVER. I see elements of these kind of works much more in ROVER than in ANIMAL KINGDOM. Would you say ROVER is in fact more in tune with your own audience preference?

I think that could be true.

I think The Rover is a far more accurately realized manifestation of my sensibilities, [and] a more maturely realized execution of my intent than Animal Kingdom was.

I don't know what it is about Australia and post-apocalypse, but they fit together extraordinarily well. There's also a Scandinavian-like element to the film as well, that kind of cold emptiness many of their films echo. Were there particular films that you were riffing on for when you were crafting the story that led you down that road of looking for something as dry as that and as confined as this?

It's funny, I have trouble sometimes remembering what those original moments of intent were.

I had started writing the central character for Guy Pearce - often [it's] the case [that] I have an actor's voice in my head, and that starts to dictate the form the character takes. I love that powerful, intimidating, yet emotional stillness that Guy does so well. That started to generate for me a character that I had always hoped would turn out to be quite a monstrous creature.

In being so quiet, taciturn and emotionally shut down, it then dictates the silence and the sparseness of the world around him.

In contrast, there is Pattinson's character, who I think is extraordinary in this film. Can you talk about bringing him into the role? How did you work with him on attenuating his performance, making sure it didn't get too broad?

In a way, the answer to both questions is that Robert came in and tested for me and his tests were just extraordinary.

I, like everyone else, didn't know what he was capable of. Certainly his previous work didn't give you a clear indicator.

I met him before I even knew I was going to make The Rover, and there was something about him that I really liked. He's obviously intelligent and really wonderfully emotionally available.

When [Pattinson] came in to audition for me, he came in with a really beautifully defined and sophisticated reading of the character that seemed from the outset to avoid all of those possible moments of caricature that that character could so easily slip into.

How did Pattinson get hooked into the project?

I had a meeting with him maybe a year before I made the movie and it became immediately apparent to me in that meeting that he not only loved Animal Kingdom but had seen all of the shorts that I had made with my friends. Je had beyond that a really eclectic, sophisticated interest in cinema. He was actively looking for interesting things to do and actively looking to meet interesting filmmakers.

Had he done any of his Cronenberg work when you first started working together?

Yes, I had seen Cosmopolis. I had even had a phone conversation with Cronenberg to see what working with Rob was like generally. [With] Cosmopolis, that is another character that is quite brooding and still in a way that's not similar to the stuff he does in Twilight. It didn't give me a clear indication that he could do the 180 degree shift that I was going to ask him to do on The Rover.

I always needed to see an audition. He was willing to do it because he knew that he wanted to play the character and that he needed to work hard to get it.

I love that whole notion of you as a director in Australia just calling up Cronenberg and asking him for advice. Is that a common thing? I picture some secret handshake between directors where you exchange private numbers.

I think in the world of filmmakers and generally those kinds of phone calls are reasonably easy to facilitate because they're reasonably important. I didn't want to ask David whether or not Rob was a good actor. I felt that I had seen that in the tests and long auditions that he had done for me. What I wanted to know was what he was like as a human being on set because those things can be important. David shared his experience which turned out to be much the same as mine, that he was delightful and hard-working.

Who did you call about Guy Pearce?

Well, I didn't have to. I knew that experience was going to be a good one.

Is Guy Pearce as respected in Australia as he is internationally?

Yeah, very much so. He's just been doing it for a long time and it's a cliché to call an actor transformative but he truly is. There's just a general sense that Guy's capable of anything. And I think there's a great respect also for the kinds of decisions that he makes and the career that he's forged for himself. He doesn't seem to be burning with an ambition to be some kind of gigantic tentpole movie star, he just wants to do good movies.

It's a Canadian thing that we sometimes burn our idols, so I wasn't sure if at home, he wasn't quite as adored and that there's a greater fetish for international talent

Have you been able to play your film for a local audience yet and how will it play differently in Australia than it will within the batshit bubble of Cannes?

Weirdly, I was just talking to Guy about this about five minutes ago. We just premiered the movie in Sydney about a week ago and the film did play very differently to the way it played in Cannes.

In Cannes, it felt all about stillness and tension and silence in the room. In Sydney, the room was bubbling with life, people were making noises and giggling all the way through it, which felt good and might have had something to do with an access to the vernacular or a familiarity with the landscape, but it was fun and we're having our premiere in L.A. tonight and I have no idea really how it's going to play for an American audience.

The title is an evocative one

Technically, the dictionary definition of a rover is a drifter, but I like the idea of that puppy dog allusion. I like the idea of his character being a mangy, wounded dog and Rob's being an excitable puppy with a wagging tail, looking for a traveling companion.

Is it also fair to say that it has to do with the notion of the iconic cowboy image of the Australian outback, the rover who would be the one in charge of herding things in a particular way, and when things don't go his way, things go badly?

No, you're talking about a drover.

Yeah, exactly. I had thought you were playing with that iconography, taking the notion of the Aussie herder, or original cowboy, and turning it on its head.

No! It was really kind of scammy when I was making the film and some friends would come up to me and say "so, how are things going with The Drover?" And I would go "oh, god, please don't tell me that's what you think I'm making. Why do you think I'm making a movie about a man herding cattle?"

Do you think the next projects will be in a most similar vein to this film, slightly quieter and introspective?

I'm cooking a couple of things at the moment, all of which are bigger and denser and more complex than The Rover. I think I've had my brief fool around in the gardens of the dark elemental fable but both of these things that I'm working on are pretty embryonic at the moment, so I don't really know exactly what tonal form they'll take.

Because of the international success of ANIMAL KINGSON you must have been approached to do some bigger, more mainstream Hollywood stuff. Is there something that you're itching to do on that front, something completely different? If they approached you about doing the next STAR WARS film, is that something you'd be excited about doing?

I'd never say never to anything!

I remember feeling quite clearly when it came time to decide what my second movie would be that I really wanted to make something contained and that I could fully control because it felt important to me that I hang on to my voice whatever that is. if I were to venture into those waters, the big studio tentpole waters, I would want to make sure that I had enough caché in the bank to take that voice into a project of that nature without feeling that it would be too diluted.

What is a film that you love that might surprise us?

I re-watched The Breakfast Club on a plane recently. That movie is so good. John Hughes is so great for that, but they're just such beautifully drawn characters for a younger audience in a world that is both funny and strangely, beautifully sad. He was so good at that stuff!

Do you feel this content is inappropriate or infringes upon your rights? Click here to report it, or see our DMCA policy.
david michodguy pearcerobert pattinsonthe rover