Obviously, there's a bit of metatextual, non-diagetic solemnity to Brick Mansions, the final feature film starring one Paul William Walker the Fourth.
Sure, we're going to get whatever scenes from Fast and Furious 7 they'll cobble together, but, really, this is his last shebang. Do we see Mr. Walker zoom around in a car for no particular purpose other than "thrills"? Yup. But this time, we see a fully packaged action star, one meant to compete mano-a-mano against the likes of David Belle, aka that guy in District 13 who helped popularize all that Parkour stuff.

Ostensibly, this is a remake of Luc Besson's original Banlieue shtick, with the script once again penned by this most prolific of French action maestros. Instead of the slums of Paris, the film is set in a near-future Detroit where a housing project (the titular Brick Mansions) is home to scum and villainy, a cancer in the heart of a city ripe for revitalization.

There's a comical "foreignness" to these opening moments that speaks to one of the film's accidentally most interesting elements -- namely, its weird mix of regressive and  transgressive racial politics at the heart of the plot. A bunch of white guys are in control of the city, a white cop comes along to fight a bunch of black and other "tanned" dudes and dudettes, all whilst a ticking bomb keeps things moving apace.

Yet when giving even a moment's thought to the machinations of the political elite, their threat of a bankrupt Detroit is comical at best, given the current situation of that once prosperous city. This isn't even something as sophisticated as an 80s Robocop vision of a new Detroit, this is some 70s-style fear piece, complete with old-school threats of neutron bombs first developed in the run up to Vietnam. Reality is more complicated and often far scarier than this comic book vision of an apocalyptic metropolis, as sometimes schools and hospitals close out of desperation or incompetence, rather than malice by a cabal of champagne-swigging plutocrats.

Naturally, I'm overthinking this mess, for this isn't really Detroit, any more than Paul Walker is a convincing action hero. You just kind of have to go with it. The film feels dated, yet it's also kind of charming. A fancy (Detroit-built) Mustang for our hero to drive? Sure! Why not have the license plates of the future be a mix of illegible type along with an obnoxious QR code (remember those?), all to make it seem funky fresh.

Still, I'm getting ahead of myself again. As a Parkour film, it's a bit of a mixed bag. The first action sequence seems to encompass most of what Belle is able to muster, and save for a few bits here and there, this is hardly the revelatory bit of bouncing and jumping that we got from D13. And while they do milk a little bit the difference between the cop that can't implausibly jump through tiny spaces without fucking it up versus the human Slinky, I think they could have mined that fish-out-of-water shtick even more. (Note that I'm mixing metaphors here with the grace and dexterity displayed by Walker's flailing limbs.) 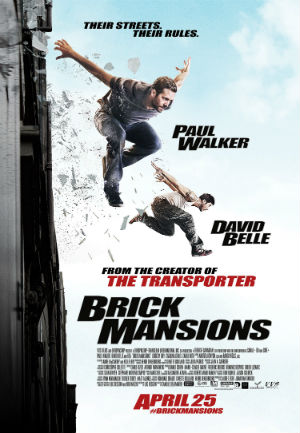 Now, you'd think from all this that I would have hated the film. But I have to admit, for whatever reason, that's not the case. It's not original, it's not effective, and it's not even particularly well made, but there's a certain... earnestness to it that I liked a lot. That's not to say it's dour or humorless, but the film does manage at certain moments to take itself seriously enough for me to take it seriously. I guess it's a small victory that it doesn't seem to be winking at the audience the whole time, even if, in one scene Walker literally winks at the audience.

With its mindbogglingly implausible ending that frankly deserves an entire exegesis examining how gentrification seems to follow a certain palate of complexion, this flick is little more than a forgettable trifle. Yet while it's unfolding, while the machinations of the plot unwind and the double crosses get triple crossed, it's all, somewhat embarrassingly, a fun thing to behold.

It even seems a perfectly fitting capsule for Walker's talents. Like Belle, he seems to get what type of film he's in, and they both simply get down to business, much in the way Jason Statham has made a career of showing that, through tenacity and conviction, he can rise above some pretty appalling or mundane scenarios his films put him in.

No one is going to confuse Brick Mansions with art, nor even an action film that lives up to the standards of its contemporaries or the original on which it's based. It is, however, kind of fun, and in this case, maybe that's enough.
The film opens wide in cinemas across North America on Friday, April 25. Check local listings for showtimes.

Do you feel this content is inappropriate or infringes upon your rights? Click here to report it, or see our DMCA policy.
Camille DelamarreDistrict 13Luc BessonparkourPaul WalkerremakeBibi NaceriDavid BelleRZAGouchy BoyActionCrimeThriller