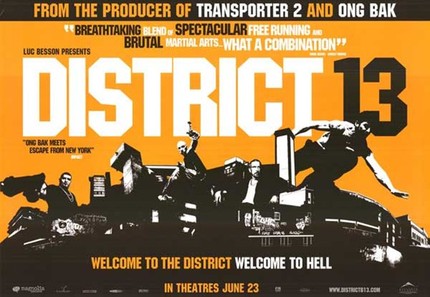 Whether you call it Banlieue 13, District 13 or District B13 - it was released under all three titles in different territories - there's no denying that the Luc Besson produced action film caused something of a sensation upon release. For many it represented a first exposure to the sport of parkour - or free running - and the film's fusion of that free flowing style with traditional martial arts made it a hit among fans of international action.

And now Besson wants to do it again. In English.

EuropaCorp's American Film Market mailout declares that an English language remake titled Brick Mansions is now in production. But given that it does not list a director or cast - i.e. we do not know yet whether original star and co-founder of the parkour movement David Belle will appear - and the IMDB currently lists the project as in-development that seems a little bit premature. Here's the official synopsis, however:

Chicago suburbs: nobody has control over Brick Mansions. Damien, an undercover cop, is facing an extreme mission: a mass-destruction weapon was stolen by Tremaine, the most powerful drug dealer in the Ghetto and Damien needs to infiltrate the gang to defuse the bomb. To accomplish his mission, he needs help from someone who knows well Brick Mansions: Lino, an expert at getting out of trouble with his extraordinary agility. Lino has had problems with the police in the past, but needs the mission to rescue his sister abducted by Tremaine. Will he accept joining forces with Damien?...Will they succeed in bringing down Tremaine?