Imagine 2014 Review: THE CREEP BEHIND THE CAMERA Is A Cute And Clever Hybrid 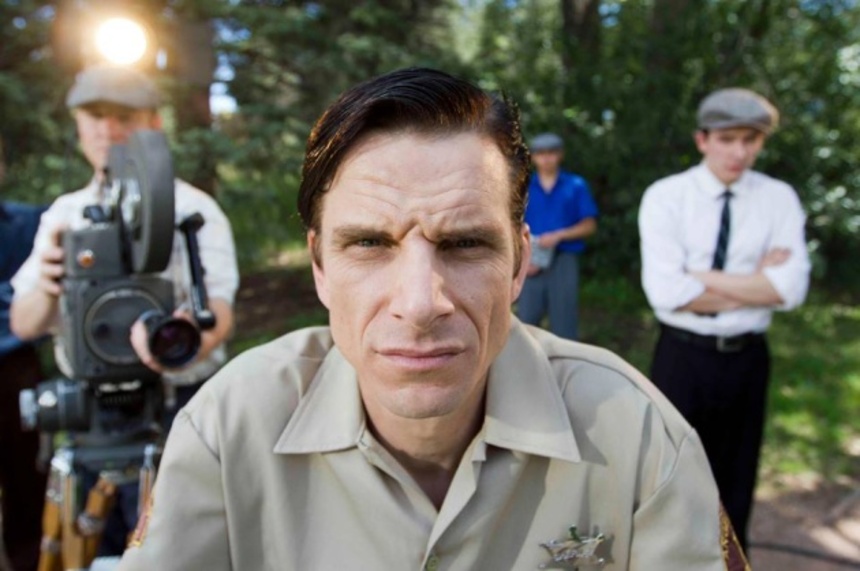 (When Charles Manson met the Carpet-Bag-Monster...)

Is it a drama?
Is it a comedy?
Is it a documentary?
It's... The Creep Behind the Camera!

One of the World Premieres at this year's Imagine Film Festival Amsterdam, The Creep Behind the Camera tells the story of how the film The Creeping Terror got made. Or, rather, it casts its light on the nefarious exploits of the man who directed that movie, the irredeemable con-artist (and all-round asshole) Art Nelson aka. Vic Savage.

Years ago, director Pete Schuermann came upon the story of The Creeping Terror by chance, and was amused enough to check and see if he could make a documentary out of it. After some digging and talking, he discovered wilder and wilder details, but unfortunately without any pictures or footage attached.

This meant he had to resort to creating at least some re-enactments, and that eventually led to the decision to make the film a comedy-drama instead of a documentary. Then again, the interview footage was too funny not to use. So in the end The Creep Behind the Camera turned into an unusual hybrid: an acted narrative with bits of documentary spliced in between, whenever a story beat seems too strange to be true (like the actual fact that Charles Manson helped out on the set), or whenever a detail needs some additional explaining.

These bits of documentary are often incredibly funny. They also contain animated sequences, describing what writer Allan Silliphant REALLY had in mind when he created the script for The Creeping Terror, which makes the contrast with the eventual execution even more extreme. 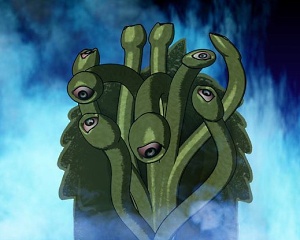 The acted narrative itself is unfortunately less successful, intertwining two storylines which never really quite gel. Storyline one is of course the creation of the wretched film, which makes for great comedy. The second storyline is about the relationship between Art Nelson and his first wife Lois, a poor girl abused by her ultra-religious mother, only to be further tortured after her marriage, by a psychopath husband who treats her like his personal slave.

The two storylines skip to each other at will, together creating an endless barrage of defamation towards Nelson as part con-man, part vile abuser, all creep. Which is fine and in all probability what the man deserves, but despite the film being about him, you still never get a good impression about what goes on behind the facade. You don't even find out if Nelson himself thought he could actually direct or not.

The actors, however, deserve full credit, giving the material their all. Bill LeVasseur is solid as producer William Thourlby, one of the main sources of funding for The Creeping Terror, and also one of the first people to smell a rat.
Josh Phillips plays the maniacal Art Nelson and impressively manages to avoid portraying him as a cartoon, even when the script pushes him hard in that direction. During the scenes of domestic abuse, he even becomes a disturbingly menacing presence, all fun and charm leaving his character at the drop of a hat when necessary.
But perhaps best of all is Jodi Lynn Thomas as the beleaguered Lois, who has the most developed character arc in the film and stays believable throughout. If there is any justice, these three actors should fast become more famous because of their work in this film.

In the end, The Creep Behind the Camera doesn't quite entirely come together, nor does it become as great as you'd want it to. But it is a cute and clever hybrid which makes for some thoroughly enjoyable viewing, due to its bizarre subject-matter and the damn good acting from its leads.

The audiences at Imagine Amsterdam liked it too, and awarded the film a rating of 6.9 out of 10.

The Creep Behind the Camera

Do you feel this content is inappropriate or infringes upon your rights? Click here to report it, or see our DMCA policy.
Pete SchuermannJosh PhillipsJodi Lynn ThomasBill LeVasseurBrian McCulleyDocumentaryAnimationBiography

More about The Creep Behind the Camera